Response to Daily Telegraph published 27th March 2021
By Lucy Kassa & Anna Pujol-Mazzini,
The Embassy of the State of Eritrea to the United Kingdom & Ireland, would like to take this opportunity to reiterate that it vehemently condemns the rape of women in the strongest possible terms and is of the unwavering belief that there can never be a situation where the rape of women can be justified under any circumstances. The Embassy wishes to express its profound dismay in the baseless accusations levelled at the Eritrean army by the Daily Telegraph in its article, ‘We’re here to make you HIV positive’: Hundreds of women rush to Tigray hospitals as soldiers use rape as weapon of war. (UNAIDS Country Factsheets Eritrea:- 0.4% – Tigray 2.3%)
The article is a direct attack and goes against our Eritrean values, values that we hold dear today and have held dear for several hundred years.
It is to be noted that Eritreans have for the most parts of the past sixty years been fighting against occupiers and invaders, as freedom fighters and 30% were females of the Eritrean army. In this long and protracted struggle for freedom and the fight to safeguard Eritrean sovereignty, Eritreans have never used rape as a weapon of war nor have they been accused of using rape as a weapon of war. It is therefore most unfortunate that the Daily Telegraph has decided to publish unfounded allegations against Eritrean forces without having first diligently and thoroughly gone through the evidence.
The Embassy would have expected the Daily Telegraph to have applied the same stringent checks on its sources that it would have certainly done so, had the accused been members of the British Army. One is reminded of the occasion where the Daily Mirror had published photos of what it had claimed to be British soldiers abusing Iraqi prisoners. It is to be recalled that the British press had gone to great lengths to prove that the photos were fake, even going as far as intimately analysing the footwear and the vehicle featured in the photos. It was the concerted effort and the determination of British experts and media that eventually proved the photos to be fake. The fact that that the Daily Telegraph has now failed to apply the same level of checks on what it deems to be evidence, is a sad indictment of the double standards practiced in the western media. No doubt had the Daily Telegraph done a more thorough research, it would have been able to uncover the harrowing history of the prevalence of rape in the TPLF controlled region of Tigray.

One does not need to delve too far back in history to find the crimes of the TPLF committed against women. In Nov 2019, women in the Tigray region, which at the time was under the absolute control of the TPLF, had protested against the prevalence of rape in the region at great risk to their own personal safety. In a tweet written on 22nd October 2019, one of the organisers of the protest posted a most harrowing statistics under TPLF rule. She claimed that out of 21 women staying at a shelter, only 2 of them did not know their attackers. 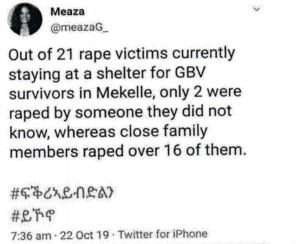 See Links here:- https://twitter.com/aymoker/status/1379035569808871426
No any Ethiopian troops, Amhara militias or Eritrean forces could committe any sexual abuses against women&girls of Tigray. But Tigrinya is eyewitness for statistics girls who raped monthly Before the war. Rape is traditional in Tigray.
Video – https://twitter.com/badnetkeleta/status/1376363792477650949
Tigray Police Man sexually attacked more than 50 women (including married women), was released within 12 hrs paying to 100 USD bail
is a common occurrence. i TMH revealed in 2019

The horrific & inhumane level of sexual violence on Tigray under TPLF is documented even in their own media. Including acid attacks, amputating legs, inserting foreign objects in uterus & murder…says Selamawit Kitaw (Women’s refuge) It is also to be noted that it was only last year that a TPLF official who had sexually abused some fifty women was essentially allowed to go free without any repercussions for the abuse he had carried out. There is a mountain of evidence available to those who are interested, that clearly shows that the TPLF has used and continues to use rape and other abuse of human rights to further its ambitions. It is also abundantly clear that the rape of women was a major problem in the Tigray region of Ethiopia well before November 2020. Furthermore, to compound the issue the TPLF upon realising that it was on the verge of defeat, had opened the prison doors of the region to unleash a large number of hardcore criminals, which included rapists, onto the civilian population.
The Daily Telegraph and the International Community, must not be fooled by the accounts provided by the remnants of the TPLF and must in the interest of the truth, seek to identify the real perpetrators of the crimes against women and the society as a whole, so that they can seek justice for the wrongs that they may have suffered. To try and blame Eritrean troops of crimes that in all probability have been committed by TPLF forces and those associated with
them, is to deny the victims justice and is being complicit in the crimes that have been committed. The TPLF has a long and well documented history of the use of rape as a weapon of war or a means to suppress a population. The TPLF’s actions in the regions of Gambella, Oromia, the Ogaden, Wolkait, and even in the Ethiopian capital itself testify to the level of the depravity the TPLF is capable of. It is to be noted that the Ethiopian government has
released harrowing stories of the abuse of prisoners by the TPLF, where even men are said to have been raped by TPLF officials and their henchmen. The Embassy cannot stress enough the importance of conducting a thorough and objective investigations into all of the allegations.
The Embassy notes that despite several western media organisations operating in the Tigray region of Ethiopia, none have presented any irrefutable physical evidence of the presence of Eritrean troops in the cities and towns of the Tigray region of Ethiopia, where the crimes of rape are said to have been committed. The lack of evidence regarding the presence of Eritrean troops, is not for the lack of trying nor is it because of the ability of Eritrean troops to make themselves invisible, but for the simple fact that there are no Eritrean troops in the areas that the Daily Telegraph states.
The Embassy wishes to reiterate its faith in the discipline of Eritrean troops and condemns attempts to find Eritrean troops guilty of a crime, before any serious investigation in the matter has been done. The Embassy strongly condemns all attempts to besmirch the good name of the Eritrean army and Eritrea itself.

Embassy of the State of Eritrea to UK and Irland