President Isaias Afwerki in Sudan, for a two-day working visit 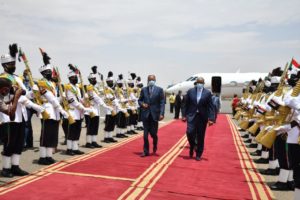 The two Heads of State further urged for continuation of the consultative forum launched by leaders in the region and which remains vital for bolstering bilateral ties through a wider, Horn of Africa, framework of cooperation. They also exchanged views on current regional issues.

The two leaders further agreed to strengthen their efforts in the implementation of the Agreement of Cooperation reached between the two countries in the political, economic, social, security and military fields.

Tags: for a two-day working visitPresident Isaias Afwerki in Sudan