Allow me first to express my warmest congratulations to the people of Eritrea inside the country and abroad on the occasion of the 31st Independence Anniversary.   Let me also extend my profound gratitude to all those who have contributed in the organization of the celebrations of this auspicious event.  My warmest gratitude too; to all Friends of Eritrea and to those who conveyed their messages of congratulations.

Our 31st Independence Anniversary has its own distinct attributes in these perplexing times of unremitting regional and global turbulence. In the event, it behooves on us to comprehensively assess our past, current and future trajectories on the one hand; and, the events that have transpired yesterday and today both at the international and regional levels on the other so as to preserve and protect our independence and sovereignty in this critical year.  This appraisal is indeed vital to gauge what we can anticipate tomorrow as well as to determine what we will need to accomplish in the long term.

Eritrea’s independence and sovereignty was derailed from its natural trajectory in 1941, after the end of World War II (in our part of the world), stifled and suppressed as it was by the major powers of the time.  As a consequence, the aspirations of the Eritrean people to independence could only be manifested in the form of fervent resistance. The destruction of Eritrea through annexation concocted in order to mollify perceived and overriding “strategic” interests of the major powers, and, the political subterfuges woven to divide and weaken Eritrean ranks through religious division and strife were not however successful.  On the contrary, these acts only triggered higher political awareness in the Eritrean people, and, prompted and invigorated their political struggles and organizational competency thereby laying robust foundations for their independence and sovereignty.  As the political struggle of the Eritrean people intensified with qualitative momentum, the forces of domination resorted to military suppression.  Again, this gave birth to the armed struggle and resistance of the Eritrean people and uplifted the wall of independence to a higher platform. The long journey of armed struggle for independence was also marked by myriad and divisive acts of subversion by external and internal forces in order to instill internal cleavages and thereby curtail the progress and pace of the liberation struggle. Undaunted by these attempts, the Eritrean people further buttressed and consolidated the foundations of independence through effective organization of its ranks and by assiduously cementing its cohesiveness.  The political awareness developed in a dynamic process in tandem with organizational prowess and unity ultimately enabled the armed struggle of the Eritrean people to overcome all impediments and triumphantly achieve independence.  The independence achieved after fifty years of struggle that exacted heavy sacrifices was further imbued with legal sovereignty.

The experiences and lessons gleaned in this seemingly brief period of fifty years, (i.e. 1941-1991); its organizational dimensions and trajectories; the culture of defiance and resistance that it nurtured; the popular cohesion and unity that it fostered, constitute a mammoth revolution that encompassed a gradual and incremental generational transformation.  The scale of this transformation is better underscored when gauged against the magnitude of the hostilities and the existential threat that these posed to the Eritrean people and their nation.  The essence of the independence anniversary that we are celebrating as usual today is the cumulative product and value-system of the dynamic political, military, social and cultural processes that transpired in those fifty years. 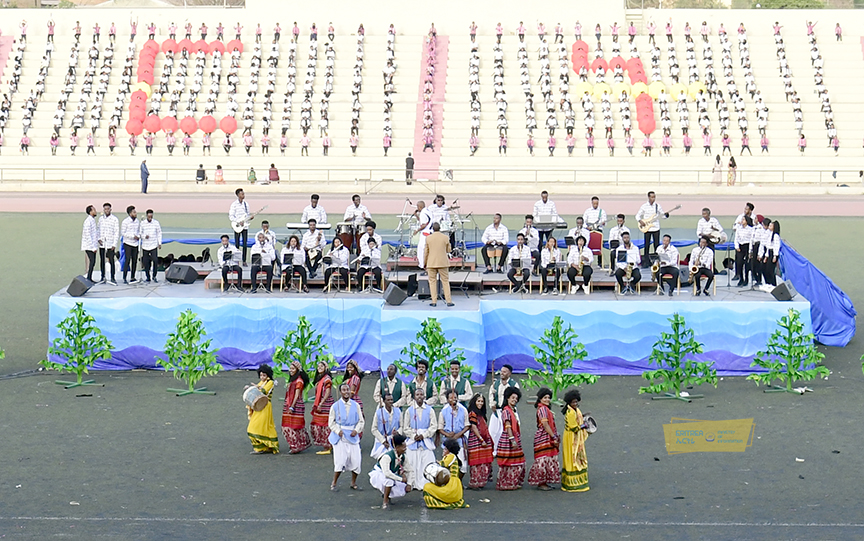 Unfortunately, the forces of domination and oppression were not ready to give respite to the Eritrean people to focus on and undertake the heavy tasks of nation building.  As it was the case after 1941, they resorted to willful destruction of Eritrea’s economic base and infrastructure by instigating groundless and sinister border disputes and conflicts.  And when these subterfuges were surmounted, they went beyond defamation and demonization to impose illicit and unilateral sanctions (2009-2018) under spurious accusations of support to “terrorism”.  This was accompanied by relentless acts of covert subversion against our national security.   And yesterday, as if “in reparation” to the overt assaults unleashed against our country in the past, they have shamelessly imposed a second wave of “sanctions” against us.

In the event, the significance of our hard-won independence and sovereignty stems from the cumulative efforts and values nurtured, phase by phase, in the past eighty years. It is based on the lessons gleaned both in the first fifty years of struggle prior to independence and the hostilities unleashed for 30 years thereafter aimed at undermining our independence, sovereignty and objectives of nation-building.  Its inexorable and dynamic consolidation will remain the obligations and responsibility of generations.

The cultivation and consolidation of ties of friendship with other peoples was a fundamental conviction that the Eritrean Liberation Struggle upheld and vigorously pursued to enhance solidarity and complimentarity.  This is not a novel concept that is in vogue these times.  The solidarity of peoples’ liberation struggles remains indeed a choice that cannot be shelved even after independence as it is aimed at fostering mutual complimentarity, growth and prosperity for generations; to lay a conducive climate.  The independence and sovereignty of any nation is guaranteed, and sustainable development is thereby enhanced and bolstered, through mutual complimentarity of nations and peoples.  The solidarity and complimentarity of nations and peoples has its unique significance especially in Africa. As a highly marginalized continent and in the context of a burgeoning population of 1.2 billion, African nations need to forge regional and sub-regional institutions above and beyond the protection of their independence and sovereignty.  This is not a choice but a necessity.  This is the reason why the Government of Eritrea has devoted much resources and energy for regional integration, and to promote mutual economic growth, stability, as well as common action against terrorism, and subversive acts against national security.  The impediments and agendas of the forces of domination may have curtailed its success.  Nonetheless, it remains an indispensable objective that is imperative for bolstering the independence and sovereignty of peoples.  As such, it must be pursued with greater vigour and in the context of unfolding international events.

As a matter of mere temporal and situational coincidence, the achievement of our independence occurred at the end of the Cold War.  The global and regional parameters that underpinned the end of the Cold War are numerous.  But essentially, the phenomenon symbolized and was a manifestation of the termination of a dysfunctional global order and lost epoch.  The critical question is what were the subsequent developments? What are the current and future prospects?

After 1991, what transpired in what is termed as the “West” – the US led bloc – essentially championed by the miniscule forces of domination (who represent neither the people of the United States nor the peoples of the West) was the emergence and prevalence of a dangerous trend. These elites of domination misconstrued the end of the Cold War as a “historical opportunity”.  They maintained that after the collapse of the Soviet Union, “the world will be ours for the next millennium…Our superiority in all fields will not be contested by any force”.   And at any rate, “the emergence of such a force shall not be tolerated… The world will be divided into spheres of influence… and it will be managed through selected anchor States”.  As it happened, they embarked on a policy of “containment” of Russia, which was then perceived as their primary rival, within a broad strategic framework.  In tactical terms, the east European countries situated within proximity of the Russian borders were chosen as vehicles for the “containment policy”.  The potential pitfall of this policy which is tantamount to the declaration of war was too evident.

The dangerous situation that it has created now is the inevitable corollary of what was originally set in motion.  The situation that has unfolded in Ukraine now is a continuation of this trend; it is not a sudden occurrence.  Ukraine and its people are victims and pretexts of this policy.

The containment policy and its multi-layered tentacles were not successful in the past 30 years. Opposition to the rule of the jungle (in brief, rule of the jungle whose hallmarks are: expropriation, intimidation, saber-rattling, defamation, punishment, sanctions, invasion… flouting of international law; weaponization of human rights) imposed by the elites of domination grew with time.  Other perceived threats came into the global theatre to supplement the Russian “threat”.  The failed philosophical aspiration entailed turmoil and economic crises (primarily in untenable distribution of wealth and income) in various parts of the world albeit with different forms and pretexts.  The elites of domination did not target Russia alone. By the same token, they embarked on the containment of China not only through instrumentalizing Taiwan and Hong Kong but also by incubating various alliances and rivalries in Asia as a whole.  The danger that this poses will not be less, if not much greater, than what has transpired with Russia.  The elites of domination will not rectify their misguided policies.  Indeed, it is not difficult to discern the trajectory that will unfold – with all its consequences – from their reactive and desperate miscalculations.

In view of the regional and international situation briefly described above, the enormity of the task of safeguarding our hard won independence and sovereignty is too transparent to merit elaboration.  In the event, the priority of priorities and our current choice constitute: the reinforcement and bolstering of our firmly entrenched value-system; reinvigoration of our efforts of nation-building in all developmental fronts; combating the challenges we face with characteristic resoluteness and wisdom so as to attain a higher level of growth.

Promotion of regional stability and enhancement of solid ties of mutual cooperation, complimentarity and growth among independent and sovereign nations and peoples has been and remains an integral part of our nation-building.   As such, it is a timely imperative for us to work for our common objectives in this regard with expanded and redoubled efforts in spite of overt and covert destructive agendas of creating cleavages among the citizens of our neighbourhood to weaken them under different ruses of vertical polarization.

Much valuable historical lessons have been gleaned from the debacles of the Cold War and its sequel characterized by misguided attempts to impose a  uni-polar world order.  The stability and prosperity of the peoples of world can only be anchored on a viable global order in which the independence and sovereignty of nations and peoples is not breached; international laws are respected; interventions and unilateral sanctions are terminated; global and fair distribution of wealth and income are ensured; and, ties of cooperation and complimentarity are fostered.  In the event, it is incumbent on us to be engaged with all peoples and nations to promote this global reality and as part and parcel of our national, regional and continental obligations.

This is our Independent choice and pride.

My best wishes for a good rainy season!

Glory to our Martyrs who made independence and sovereignty a reality!

Victory to the Masses! 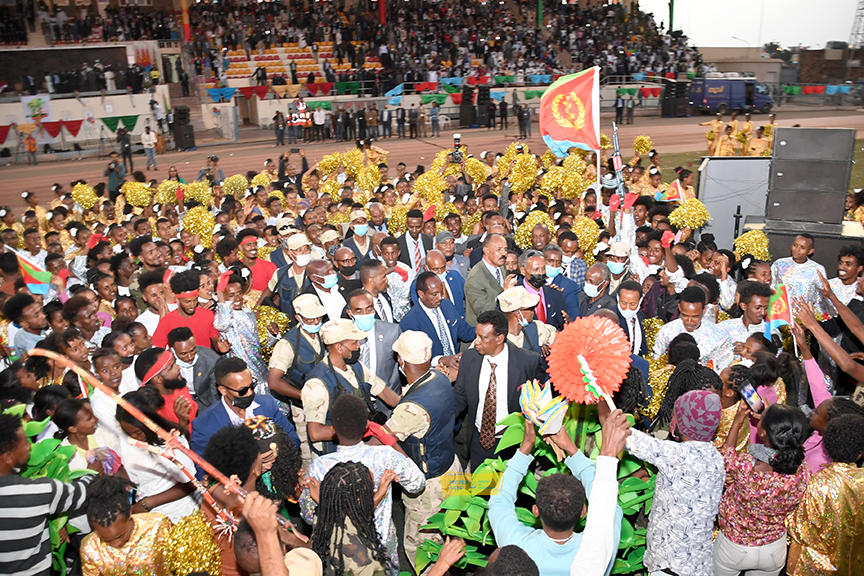