Dear Compatriots at Home and Abroad, 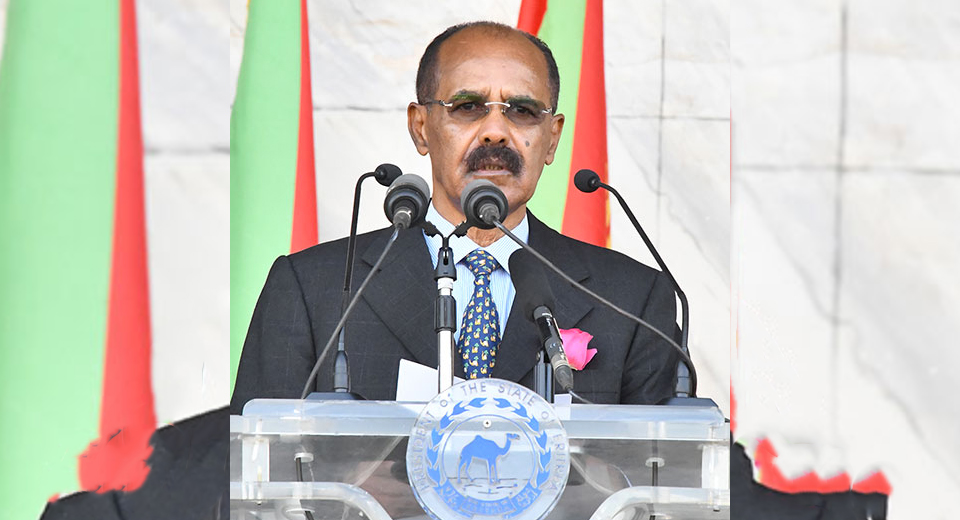 My profound Congratulations on this auspicious Day of the 30th Anniversary of our Independence!

Let me also express my gratitude to those who have organized this event.

The significance and splendour of this momentous day radiates more with time; year-in and year-out.  And beyond instilling immense jubilation and pride, it impels us to ponder on, and mull over, several indelible truths.

Eritrea’s inalienable legal and natural rights to independence and sovereignty were suppressed and trampled upon at the end of the Second World War.  The Eritrean people refused to succumb to slavery, colonialism, deceit, the logic of force, and subordination.  They waged a ferocious struggle with heroism and resilience for fifty years – from 1941 until 1991 – to assert the independence and sovereignty of their country through heavy sacrifices.  This is the historical backdrop, the bedrock and statue, on which the significance of Independence Day rests.

The significance of this memorable day is also amplified by the resilience of the Eritrean people to confront and thwart myriad challenges, in the past thirty years after independence, so as to preserve and defend the national sovereignty that they had secured through precious sacrifices and justice.  The fact is, the agendas of greed and domination are still prevalent without effective deterrence.   As a result, the predicaments that we had to face in the past 30 years – just as it was the case in the preceding 50 years – were complex and multi-faceted.

One of these subterfuges was putative border disputes.  Indisputable colonial boundaries were misconstrued to stoke conflict among neighbouring countries.  The Hanish and Badme conflicts are conspicuous testimonies of these subversive schemes whose ultimate objective was to keep Eritrea hostage through the continuous fomenting and “managing” of crises.   In the case of Badme in particular, the attempts to perpetuate illicit occupation of our sovereign territories, in spite of the final and binding Arbitral Award of 2002, were vivid manifestations of insidious hostility towards the country.

Instigation of conflicts under the pretext of border disputes was not enough and could not fully mollify the appetite of the agendas of domination.  The fact is these subversive schemes could not dampen or vanquish the resistance of the Eritrean people.  In the event, fabricated allegations of “terrorism” were concocted and harmful sanctions imposed on Eritrea in 2009 through heavy-handed pressure on the UN Security Council.  In this additional gesture of hostility, albeit with a different facet, Eritrea’s principal detractors had no qualms to act as the prosecutor, witness, judge, and enforcer of punitive measures

Furthermore, economic and political tools, campaigns of defamation and demonization, were pursued without let-up by churning out cheap lies to reinforce and ramp up the hostile agenda.

But, the relentless schemes and hostilities woven to undermine our national independence and sovereignty foundered on the bedrock of our people’s steadfastness and resilience.  In tandem with these trends, their principal surrogate, the TPLF clique, became increasingly ensnared in an intractable bind and was ultimately sidelined as its “Game was over”.  Our patience, in the face of occupation of our sovereign territories for twenty years, had also paid off.

All these events pushed them to resort to desperate measures which culminated in the reckless attacks of November 4 last year.  Eritrea was attacked by missiles.  When the unprecedented and reckless attack was foiled, intensive and mendacious propaganda campaigns were, and continue to be, carried out for the past six months to wrongly indict Eritrea and deflect attention from the real culprit.  This is an outrageous act of transparent deceit and bankruptcy.

In the circumstances, the significance of this memorable day of our 30th Independence Anniversary is measured by the extraordinary resistance and resilience of the Eritrean people; by their victory in protecting and preserving their sovereignty and independence.  I thus extend – again – my congratulations to the Eritrean people and its heroic armed forces.

Protecting and preserving national independence and sovereignty was not confined to combating the security threats emanating from the forces of greed and domination.  Nation building through effective developmental undertaking was also a mission pursued with equal priority.  Although we may not have managed to achieve all-rounded progress, sector by sector, and in various fields and projects – with the pace envisioned and to the extent of our aspirations – the track record in our priority areas is satisfactory.  We have no doubts that overall progress will be expedited in the period ahead on the basis of the programmes charted out and reviewed already.  The experiences gleaned so far will also be crucial in this endeavour.

Another factor that has direct impact on our developmental programmes and undertakings is the COVD-19 pandemic.  The commotion and staggering loss of life that the pandemic has inculcated globally in the past year cannot but constitute a “Wake-Up Call” for humanity.  This has provoked and amplified serious questions on different economic concepts and indicators; developmental choices as well as social, ecological and health precepts.  In Eritrea, it has enabled us to identify our shortcomings – both in our health policies and operational modalities – and to implement requisite adjustments at the outset.  In this context, we shall not spare efforts to put the threat from the pandemic under full control in order to eliminate deleterious consequences to our safety and developmental objectives. This will require perseverance in our vigilance and the bolstering of our all-rounded research, preventive measures, and therapeutic capabilities.

The prevailing turbulent global and regional setting underscores the imperative to strengthen our developmental endeavors above and beyond the efforts we exert to preserve and protect our national independence and sovereignty.  In the event, I urge for more dynamic and vigorous initiatives for the effective implementation of our national security and developmental programmes on the basis of the revised broad road-map of mobilization and that is predicated on extensive popular participation.  In particular, I urge for greater participation of our compatriots abroad in view of their greater potential and particular opportunities.

Let me express our pride and gratification in our Defense Forces who continue to play pivotal role both in our national security and developmental tasks by preserving the rich heritage of our liberation war and national civilized values and norms.

Glory to our Martyrs!

Victory to the Masses!