On the Occasion of the International Human Rights Day. Remarks by Ms. Amakobe Sande 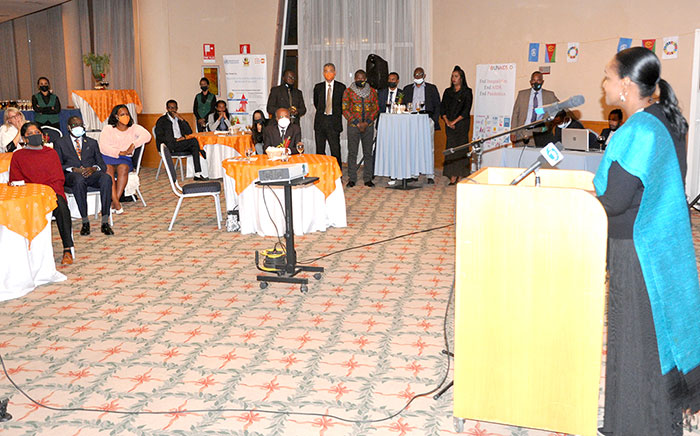 Your Excellency Mr. Osman Saleh, Minister of Foreign Affairs of the State of Eritrea;

Excellencies Ministers of Government and Officials of the Peoples’ Front For Democracy and Justice here present;

Your Excellencies Ambassadors, Heads of Missions and Members of the Diplomatic Corps

Members of the UN Country Team in Eritrea and all UN Colleagues,

I should like to begin by thanking all of you for turning up this evening as we mark the International Human Rights Day. As always, I wish to sincerely thank you, Minister Osman, for finding the time to be here tonight. We are honoured to have you and all other members of Government as we mark this important day. Thank you all for coming.

A few weeks ago, when we gathered to mark UN Day 2021, I remarked that annual observances, such as the one that brings us here tonight, can at times become routine and ritualistic and, that over time, we may become too accustomed to their messages and purpose. It is for this reason that we must remind ourselves why we are here tonight.

We meet tonight to commemorate the day in 1948 when the United Nations General Assembly adopted a powerful substantive and symbolic instrument, the Universal Declaration for Human Rights (UDHR), as the world was rising out of the ashes of a devastating war, a war that demonstrated all too well the capacity of human beings to deprive and dehumanize each other to the extreme.

It is important that we understand how powerful the UDHR is, particularly if we go back to 1948 when the norm was domination, colonialism, discrimination against women, racism, torture, summary executions, indiscriminate killings of civilians, and other forms of intolerance such as denying the disabled their humanity. This was the norm. Drafted by representatives with different legal and cultural backgrounds from all regions of the world, the Declaration was proclaimed by the United Nations General Assembly in Paris on 10 December.

Back then in 1948, sovereign African Countries could be counted on the fingers of one hand, basically Egypt, Ethiopia, Liberia and South Africa. The rest were under colonial rule.  At the time, South Africa was not allowed to sign because of the declaration’s stand against racism and all forms of discrimination and segregation

Indeed, strange as it may sound today, few of us would have been able to mingle and share a drink or a laugh, as we are doing here tonight.

We owe the UDHR and its 30 Articles to a group of individuals who were bold, visionary and courageous enough to write in the very First Article that: “All human beings are born free and equal in dignity and rights. They are endowed with reason and conscience and should act towards one another in a spirit of brotherhood.”

That statement is as evocative as it is unequivocal. It is our ‘gold standard’ for how we should relate with and treat each other, on the basis of equality and non-discrimination as reflected in today’s theme of International Human Rights Day, which is “Reducing inequalities, advancing human rights.”

Since the adoption of the UDHR on 10 December 1948, every single country that gained independence would invoke the principles of equality, freedom, and justice for all – the same principles embedded in this important document. It became a tool and a reference.

Every Member State of the United Nations has therefore underscored the relevance of the Declaration in their fight for the universal values of human dignity, freedom, justice, and democracy. They all ascertain that the UDHR is proof that equality and friendship between races and nations are possible.

Indeed, the vision of Eritrea, as articulated in the Eritrea National Charter, is “to build a better future for the people of Eritrea … to become a country where peace, justice, democracy and prosperity prevail,” and among others “to perform miracles in peaceful nation-building”.

Perhaps beyond the expectations of its framers, the UDHR has become one of the most influential documents of our time; and has shaped countless national constitutions and international treaties. Thus, all of the human rights treaties that have emerged since – on eliminating discrimination against women, on racial discrimination, on eliminating torture, or on the rights of children – are based on the UDHR. The UDHR is widely recognized as having inspired, and paved the way for, the adoption of more than seventy human rights treaties, applied today on a permanent basis at global and regional levels (all containing references to it in their preambles).

It is recognized as transcending all boundaries – national, race, faith, gender, age, or class – and includes freedom of speech, religion, press, and assembly, the right to education, to work, and to live free from arbitrary arrest, slavery and exploitation.  Since 1986, it had been complemented by the African Charter on Human and People’s Rights which emphasizes collective political rights and the right to national self-determination.

The UHDR has gone on to become the most translated document in the world, according to the Guinness Book of Records. That, surely, must say something about the deep resonance of the message of the UDHR: that all human beings everywhere have inalienable rights to which they are inherently entitled, and desire to live in freedom and dignity. To go back again to the first article……  “All human beings are born free and equal in dignity and rights…….

Human rights is a process (the UDHR recognizes the “progressive realization of rights’), an aspiration and a goal that Member states have signed up to and which, we in the UN, as servants of the Member States, take very seriously and do our best to promote.

As we take stock of our progress in the promotion and protection of human rights over the last 73 years, we must take pride in the fact that the message of the UHDR remains timeless and as relevant today as it was in 1948.

We must take pride in the fact that the UDHR has become a powerful tool for both citizens and governments in the pursuit and protection of fundamental rights.

We must take pride in how the 30 non-binding articles of the UDHR have spawned a body of binding international human rights covenants, treaties and regional human rights instruments, and influenced national constitutions and laws.

We must take pride in the fact that, today, the majority of the people around the world are aware of and believe in the fundamental truth of the value of Human Rights and Human Dignity; that few would dare say that these are not important or are secondary to other pursuits.

We must take pride in the increased ownership of human rights accountability by UN Member States through the Human Rights Council and procedures such as the Universal Periodic Review (UPR). Through the UPR the human rights situation in every Member State is reviewed on a regular basis, irrespective of which treaties the state has ratified.

We must firmly believe that the failures, ambivalence and double standards that we observe today do not in any way suggest, that the ideals of human rights have somehow become dated or are out of fashion. Failure by others to live to expectations, relativism and economic and political expediency must not be allowed to trump the universal and timeless ideals of human rights, of freedom and of human dignity.

Allow me to acknowledge the active engagement of the State of Eritrea at the Human Rights Council, particularly at the UPR. Since 2009, the Government of the State of Eritrea has received 761 recommendations for all three UPR cycles, and it has made remarkable progress by accepting 595 (almost 60%) of the recommendations. Eritrea’s progress in the area of collective rights, basic services and social protection are commendable.

Eritrea’s presence at the HRC places the country on an important world stage and gives Eritrea an important opportunity to disprove all those who may doubt the country’s commitment by demonstrating human rights in practice at home in every sphere, civil, political, social-economic and cultural and in this regard, the UN welcomes further dialogue and engagement.

The UN takes particular pride in the partnership it has with the Ministry of Justice.  But our partnerships with the ministries of Foreign Affairs, Health,  Education, Labour and Social Welfare and others, as well as with the National Unions, also included elements of access to justice work.  Allow me to particularly commend the Minister of Justice and her team for the “Law and Nation-Building week” initiative which UN Heads of Agencies and I, had the honour to take part in earlier today.

It is evident from our partnerships and from what we learnt a the “Law and Nation-Building week” today that tremendous efforts are being made at reforming the “justice ecosystem” which provide important opportunities.  There are of course gaps and challenges and more engagement, including with the Human Rights Special Procedures, would go a long way in further expanding and deepening the required synergy between justice and the rule of law.  The UN in Eritrea stands ready to walk with the country to expand our dialogue and actions particularly on the more challenging issues.

I am particularly proud as we also conclude the 16 days of activism against Gender-Based Violence today that the 50 member states of the UN who came together to draft the UDHR were led by a woman – Eleanor Roosevelt.  And that it was infact another woman in the delegation –  Hansa Mehta a staunch fighter for women’s rights in India and abroad who is widely credited with changing the phrase “All men are born free and equal” to “All human beings are born free and equal” in Article 1 of the Universal Declaration of Human Rights.

Allow me to conclude with this important quote:

“Where, after all, do universal human rights begin? In small places, close to home – so close and so small that they cannot be seen on any maps of the world. Yet they are the world of the individual person; the neighbourhood he lives in; the school or college he attends; the factory, farm, or office where he works. Such are the places where every man, woman, and child seeks equal justice, equal opportunity, equal dignity without discrimination. Unless these rights have meaning there, they have little meaning anywhere. Without concerted citizen action to uphold them close to home, we shall look in vain for progress in the larger world.’

As we celebrate the 73rd anniversary of the UDHR, let us be grateful to its inspired crafters for their foresight in bequeathing us such an enduring instrument.

Let us also recognize that it falls on us and subsequent generations to fulfill the crafters’ dream and to seek to expand, not shrink, the enjoyment of human rights.

Let us redouble our efforts, wherever we are, to work toward the full realization of the timeless ideals of human freedom and dignity through the implementation of the Universal Declaration of Human Rights across the globe.

Let us continue to stand up for our rights and those of others. Let’s stand up for equality, justice and human dignity.