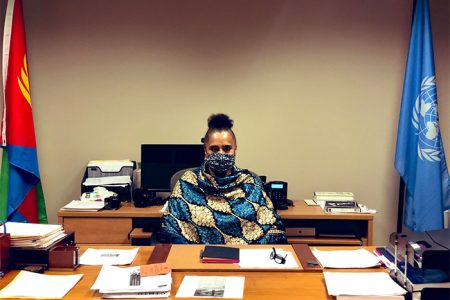 Editor’s note: recently it was announced that Eritrea’s Permanent Representative to the United Nations (UN), Ambassador Sophia Tesfamariam, would serve as Chair of the African Group of Permanent Representatives at the UN for the month of June 2021. Undoubtedly, this is a highly significant moment, both for her individually and the nation of Eritrea as a whole. Here, we offer a brief overview of the UN and some background about the African Group, while also sharing Ambassador Sophia’s message upon her assuming the position of Chair of the African Group.

According to its Charter, the UN aims “to save succeeding generations from the scourge of war, to reaffirm faith in fundamental human rights,… to establish conditions under which justice and respect for the obligations arising from treaties and other sources of international law can be maintained, and to promote social progress and better standards of life in larger freedom.” In addition to maintaining peace and security, the UN seeks to fulfill several other important objectives. These include: developing friendly relations among countries based on respect for the principles of equal rights and self-determination of peoples; achieving global cooperation to address international economic, social, cultural, and humanitarian challenges and problems; respecting and promoting human rights; and serving as a center where countries can organize and coordinate their actions and activities toward these various ends.

One of the UN’s most important structures is the UN General Assembly (UNGA). The UNGA, which is the main deliberative, policymaking, and representative organ of the UN and comprises all 193 Member States, provides a unique forum for multilateral discussion of international issues including peace and security. Each of the 193 Member States in the UNGA has one vote. The votes taken on designated important issues, such as recommendations on peace and security, the election of UN Security Council and Economic and Social Council members, and budgetary questions, require a two-thirds majority of Member States, but other questions are decided by a simple majority.

Within the UNGA, Member States are divided into various geographical groupings. These are the groupings through which elections are conducted into various UN bodies and agencies. The continent of Africa is allocated 3 non-permanent members of the UN Security Council, 14 members on ECOSOC, 13 Members on the Human Rights Council and the President of the General Assembly in years ending 4 and 9.

The Africa Group at the United Nations is made up of the 54 African Union Member States at the UN. The bloc coordinates its efforts on various topics, ranging from health and migration to issues of peace and security. The group generally holds regular meetings to receive briefings from guests and UN officials and discuss on UN resolutions and topics so that a common African position can be reached.

The group is chaired by an Ambassador from a Member State, with the position rotating monthly. The African Union Observer Mission serves as a coordinating secretariat for the group by arranging meetings, supporting the Chair, and generally providing logistical and administrative assistance where necessary.

It is both an honor and privilege to serve the African Group (AG) for the first time. It is not a task I take lightly and know that it will be a most rewarding experience. It provides a platform to engage with other stakeholders on behalf of the AG, advance the visibility of our membership at the UN, and hone new skills.

With the pandemic continuing to rage, 2021 will be a critical year for Africa. The COVID-19 pandemic and its impact on all 17 SDGs has shown that it is not just a health crisis but rather, a global human and socio-economic crisis. The impact of the COVID- 19 pandemic threatens to reverse progress, hitting those most vulnerable hardest, leaving many behind further.

Addressing the pandemic-related global health and socioeconomic recovery, effects of climate change, reducing biodiversity loss, and environmental degradation will take center stage for the foreseeable future. As the recent discussions during the Africa Dialogue Series showed, Africa can leverage its many opportunities to help strengthen resilience to overcome its myriad challenges.

Africa’s increasing youth demographics and its wealth of natural resources offer distinct advantages for the development of its trade, industry, employment, and tourism sectors. Science, technology, and innovation have been identified as being key to economic transformation in Africa. Africa needs to reaffirm its identity and take ownership of its future.

It is only when Africa’s economies, the quality of its infrastructure, the standards of its health and educational institutions, the level of its artistic, scientific and technological products, the effectiveness of its institutions and enterprises, and more importantly the quality of life of its citizens, reflect more accurately its great potential that we can rightly speak of Africa taking its rightful place in the world.

The Africa Group will explore all avenues for Africa’s post-COVID recovery and towards achieving the Sustainable Development Goals, in fulfillment of Agenda 2063, and its aspirations for the Africa we want.

Ambassador, and Permanent Representative of Eritrea to the United Nations