H.E. Ambassador Isa Ahmed Isa submitted a copy of his credentials to the Minister of Foreign Affaires of the Republic of Sudan 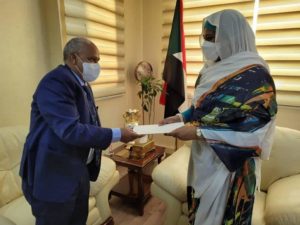 Mrs. Maryam Al-Sadiq Al-Mahdi, Minister of Foreign Affairs, received in her office today Ambassador Issa Ahmed Issa, who presented a copy of his credentials as Ambassador Extraordinary and Plenipotentiary of Eritrea to Khartoum. Ambassador Issa Ahmed Issa conveyed the greetings of Eritrean President Isaias Afwerki to the Minister, expressing his deep congratulations to her on the occasion of her assuming the Ministry of Foreign Affairs, wishing her success in her mission, which comes at a time when the region is witnessing thorny issues, but he expressed his confidence in the minister’s ability to cross Stage successfully. The meeting touched on the bilateral and fraternal relations that bind the two countries and ways to develop and strengthen them at all levels, especially the social and cultural aspects, as the Minister of Foreign Affairs valued the eternal bilateral relations that bind Sudan and Eritrea, stressing Sudan’s keenness to strengthen and develop them in a way that guarantees security, stability and well-being for the peoples of the two brotherly countries.