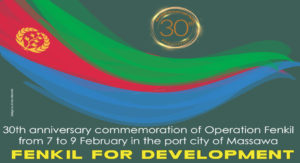 Each year, in the month of February, Massawa takes center stage in the heart of Eritrea as it commemorates Operation Fenkil. History has come to many places, has stayed awhile and, after its departure, has rendered those places famous. In Eritrea’s saga, perhaps no place has taken on greater historic importance than the Northern Red Sea city of Massawa.  Operation Fenkil would forever hold a place in the minds of all Eritreans.
On February 8, 1990, the EPLF forces began the offensive by cutting off the critical supply route from Massawa to the Asmara garrison. The surprise attack stunned the Ethiopian military and by the following afternoon the EPLF forces were in the suburbs of Massawa.
On the third day of the offensive, the Eritrean forces captured the Ethiopian naval base near the town. The only remaining portions of the city to rid of Ethiopian troops were the islands.
Operation Fenkil was one of the most decisive military operations that heralded the end of Ethiopian colonialism in Eritrea.
The operation was carried out through the coordinated attack of the infantry, the mechanised and the then nascent naval forces of the Eritrean People’s Liberation Front (EPLF).
The port city of Massawa was crucial for the Ethiopian Second Division. It had been a life-line for the shipment of its armaments and other logistics.
Understanding the importance of the port city to the survival of its war machinery, the Dergue regime spent many years building strong fortifications that surrounded Massawa.
The gallant Eritrean freedom fighters scored a decisive military victory over the then biggest army in Sub-Saharan Africa that was armed to the teeth with sophisticated Soviet weaponry. “The operation was a pinnacle of success to the EPLF besides proving its steadfastness and just cause,” said Mr. Andebrhan chair of the association of the former 16th and 70th EPLF divisions. “After the demise of the Nadew command, the collapse of the Ethiopian army in Operation Fenkil was another crucial turning point in the history of the armed struggle,” he added.
It was simply a bitter pill to swallow for the Dergue soldiers that they would never henceforth defeat the Eritrean freedom forces.
Each year, in the month of February, Massawa takes center stage in the heart of Eritrea as it commemorates Operation Fenkil.