Where Will the U.S. Strike Next in Africa? 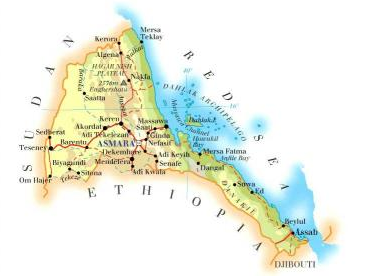 The U.S. is stalking Africa like an imperial predator. Eritrea is on the short list of who’s going to be attacked next. Eritrea, says the U.S., creates instability. However, “it is not little Eritrea that is destabilizing the Horn of Africa, but the United States, which has made the region a front line in its so-called War on Terror.”

Where Will the U.S. Strike Next in Africa?

“Eritrea’s real sin is to be one of the very few nations in Africa that do not have military relations with AFRICOM, the U.S. war machine.”

Under the direction of the United States, the UN Security Council recently extended sanctions for another year against the northeast African nation of Eritrea. The country of 6 million people, nestled against the Red Sea, is on America’s hit list. In the imperial double-speak of Washington, Eritrea is described as a “destabilizing” force in the region – which simply means the government in Asmara has refused to buckle under to U.S. military domination of the Horn of Africa.

Back in 2009, Secretary of State Hillary Clinton threatened to “take action” – and, by that, she meant make war – against Eritrea if it did not stop supporting the Shabab resistance fighters in Somalia. There was no evidence that Eritrea was, in fact, arming the Shabab, and there is no evidence that Eritrea is doing so, now – as the UN Monitoring Group on Eritrea and Somalia admits.

The monitors, who are, in effect, tools of U.S. policy, reported that they found “no evidence” of Eritrean aid to Somali fighters over the past year, and concluded that, if such assistance exists at all, it is “negligible.” Yet, the UN Security Council, under U.S. pressure, extended the sanctions, anyway. Washington claims that Eritrea’s alleged support for the Shabab has only halted because of the sanctions, and it’s, therefore, too early to lift them – which amounts to punishing Eritrea for having the wrong intentions, whether it acts on them or not.

“In the imperial double-speak of Washington, Eritrea is described as a ‘destabilizing’ force in the region.”

It is, of course, not little Eritrea that is destabilizing the Horn of Africa, but the United States, which has made the region a front line in its so-called War on Terror. Washington’s closest ally in the neighborhood is Ethiopia, from which Eritrea won its independence in 1993, after a 30-year war. The U.S. instigated, armed, financed and gave logistical support to Ethiopia’s invasion of Somalia, in 2006, plunging that country into what United Nations observers called “the worst humanitarian crisis in Africa.” Under American direction, Kenya also invaded Somalia, in the midst of a great famine, last year. The U.S. bankrolls, arms and trains the nominally African Union force that occupies Somalia’s capital, and has turned neighboring Djibouti into the main base for the U.S. Africa Command, AFRICOM.

And there sits Eritrea, surrounded by warring American puppets, interfering in no one’s affairs, yet determined to defend her sovereignty – accused by the world biggest and most aggressive power of destabilizing the region.

Eritrea’s real sin is to be one of the very few nations in Africa that do not have military relations with AFRICOM, the U.S. war machine. That puts a bulls-eye on her back, along with Zimbabwe and Sudan, which U.S. Ambassador to the UN Susan Rice demanded be blockaded and bombed back in the George Bush administration. Barack Obama’s Africa policy is an extension and expansion of Bush’s aim to militarize the continent, and the much older U.S. policy to create chaos and horrific human suffering in those regions it cannot directly control. In practice, Obama’s doctrine is the same as Bush: “You are either with us or against us.”

Eritrea rejects that doctrine; that’s why it is a target. For Black Agenda Radio, I’m Glen Ford. On the web, go to BlackAgendaReport.com.

You are missing some Flash content that should appear here! Perhaps your browser cannot display it, or maybe it did not initialise correctly.

Tags: Where Will the U.S. Strike Next in Africa?