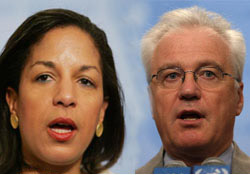 On Monday, the UN Security Council approved a new unjust Resolution (2023/2011) that expands the sanctions on Eritrea. The resolution was supported by 13 members of the Council, while Russia and China abstained.

Though the two countries are usually reluctant to support UN sanctions, the Russian representatives made a ‘curious remark’ on the alleged Eritrean attack plots.

The Russian Ambassador was quoted by UN Department of Public Information as follows:

Council President Vitaly Churkin (Russian Federation), speaking in his national capacity, said his country had abstained in the vote on the current resolution, even though he understood the many concerns expressed today by IGAD member States. Russia was categorically against terrorism in all its forms. However, regarding certain reported incidents, the Security Council had not been presented with proof of the perpetrators of the reported attack. When it came to guiding the Security Council, he said guidance should be given by the resolution, and not by another body, which could lead to different interpretations of the text.

His concerns about the current resolution included the issue of the diaspora, as well as the inclusion of phrases that could have double meanings.

Diplomatic work needed to be done and broad and multifaceted dialogue was needed to establish peace in the region. He called on all parties in the region to conduct such a dialogue to move towards a settlement of the issues.

Though the above-quoted statement, to some, looks vague, it appears the Russian envoy was referring to the alleged Eritrean plot to bomb the January 2011 AU Summit in Addis Ababa. The Security Council’s Monitoring Group on Somalia and Eritrea implicated Eritrea in its report last July.

The US Representative to the UN Ambassador Susan Rice, however, dismissed the Russian doubts, in a remark to a reporter, saying:

With respect to the Somalia-Eritrea Monitoring Group evidence regarding the plot — the thankfully foiled plot — and planned attack on the African Union Summit in January, the evidence provided by the Monitoring Group we know to be very compelling and we have every confidence in its full veracity.

The Ethiopian Government enabled every embassy in Addis Ababa that wished to come and view the evidence themselves. Some took the opportunity to do so; others didn’t. I don’t understand the basis for Russia’s claim that the evidence was not available or not compelling. From the United States’ point of view, we have every confidence in the veracity of that evidence.

Amb. Rice had also addressed, during the interview, a few more questions regarding the procedure and timing of the new resolution.

Read below the full text taken from U.S. Mission to the United Nations.
—————-

Ambassador Rice: The United States is pleased with the adoption today of Resolution 2023, imposing additional sanctions on Eritrea for its failure to comply with its obligations under previous Security Council resolutions, including 1907, passed two years ago this month.

This resolution underscores the international community’s condemnation of Eritrea’s destabilizing behavior in the Horn and its support for terrorism. It strengthens the provisions of 1907 and imposes additional obligations on Eritrea and limits its ability to continue to use the mining sector and the diaspora tax to fund its illicit activities.

We think this is an important step that is a good affirmation of the unity of the international community in response to the pleas that we heard from the leadership of the IGAD states this morning, who were unanimous in underscoring their concern about the threat posed by Eritrea and their call upon the Council for stronger sanctions.

I want to congratulate Gabon and Nigeria for their leadership in sponsoring and shepherding the resolution, and I’m happy to take a couple of questions.

Reporter: Ambassador, you saw that the Foreign Minister of Eritrea [inaudible] letter to the Council, asking them that the act should be postponed until the President could come. I was just wondering, was there a need to rush this through?

Ambassador Rice: We do not think this resolution was rushed. Discussions began on the resolution back in October. There were negotiations throughout the month of November. On Wednesday, the Council decided to schedule a vote for today, Monday. We issued an invitation on Wednesday evening to the Eritrean President to address the Council Monday morning. On Thursday, we got a letter from Eritrea saying that they didn’t intend to come. On Friday, they applied for visas at our Embassy in Asmara. They applied for 13 visas on Friday morning. Ten were issued within a few short hours. The final three were issued before — or by 10:00 the next day. All the visas were issued in 24 hours, and President Isaias’s was issued just hours after it was applied for, which, I think as many of you know, is close to record speed.

We had been expecting that the Eritrean delegation would arrive. Our Embassy was awaiting details on their flight information so that we could process that as we normally do. It never came. And then we got another letter yesterday saying that for logistical reasons, unexplained, they weren’t coming.

They had ample time to be here, in person, or through other means, as the other IGAD delegations did. And we have no explanation for their not being here except that they, perhaps, didn’t like what was going to happen today.

Reporter: Ambassador, they also seemed to say — they said it sort of lacked due process, to have the resolution already in blue and going to be voted on. Sort of like, what was the point of talking if everything was already set up with no chance to go and check with capitals or to reconsider the resolution?

Ambassador Rice: Let me address both those matters. First of all, you’ll recall that Eritrea requested to address the Council last summer. It sent its Foreign Minister and a senior presidential adviser. We spent a couple of hours with Eritrea and other IGAD delegations, hearing their viewpoints. This was soon after the Monitoring Group report was made available. They had an opportunity to address those allegations. We had a discussion and a very full exchange of views. So, there was not any absence of opportunity for the members of the Council to hear Eritrea’s point of view and that of other regional states to inform our deliberations.

The Eritreans had the opportunity to be here again today and make their case. They chose not to do so. The other IGAD states took that opportunity, I think, to good effect. With respect to the Somalia-Eritrea Monitoring Group evidence regarding the plot — the thankfully foiled plot — and planned attack on the African Union Summit in January, the evidence provided by the Monitoring Group we know to be very compelling and we have every confidence in its full veracity.

The Ethiopian Government enabled every embassy in Addis Ababa that wished to come and view the evidence themselves. Some took the opportunity to do so; others didn’t. I don’t understand the basis for Russia’s claim that the evidence was not available or not compelling. From the United States’ point of view, we have every confidence in the veracity of that evidence.

Thank you very much.