Tourism and Jobs: A better future for all 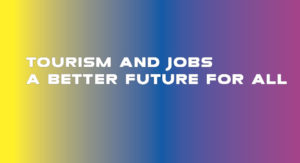 World Tourism Day, which falls on September 27, is being celebrated today under the theme “Tourism and Jobs- A better future for all”.

The objectives of the UNWTO are to promote and develop sustainable tourism to contribute to economic development, international understanding, peace, prosperity and universal respect for, and observance of, human rights and fundamental freedoms for all, without distinction as to race, sex, language or religion.

The family posed for photo in front of Asmara International airport for their wondrous memory.

So why do people travel? People travel for various reasons. Simply put they do not want to stay in one place for so long. Some people want to work in some faraway place and want to see the difference to the place of their birth or their country.

Others travel to visit their families in faraway places. People who want to see the beauty of countries and their people travel to discover as much as possible. Some are very much fond of taking pictures so that they can keep it in their special album. They create a small and cozy home museum and proudly show it to their friends and relatives. As Gustave Flaubert said, “Travel makes one modest. You see what a tiny place you occupy in the world.”

During her recent visit to Eritrea, a middle-aged Spanish woman said: “See my fingers and my neck, it is bare. I for one will not enjoy wearing gold or diamond necklaces or any ornaments for that matter; instead I enjoy traveling around the world and discover all kinds of geographical and archaeological things and culture of different people of our planet earth. So far I and my husband have visited 157 countries.”

A family from Denmark that has travelled widely has been to Eritrea. The father has visited 196 countries, and the mother has visited 120 countries. Their children, aged 12 and 7, traveled to 79 and 64 countries respectively.

When the opportunity arises, it is hard to decide whether to leave your family and open a business far away from your place. Some businessmen would rather set up their business in other places because they believe it is more profitable than staying in their birth place.

Traveling is not a luxury reserved only for rich people. You can travel as long as it is within your budget.

You can travel by bus, bicycle, or even on foot as some people going on a pilgrimage do. One does not necessarily need a huge amount of money to travel. We can budget our trip and enjoy the discovery of a place other than where we have lived for so long.

A vacation is meant for us to take a break from the drudgery of everyday life for a given period of time to have physical and mental relaxation and revitalization. Working without vacation tends to wear people down over the years. It becomes increasingly difficult for them to be productive and innovative.

In our world today people seek adventure endlessly. Climbing to the challenging heights of the Himalayas, on the one hand, and to the scorching heat of the desert safaris, on the other hand, travelers show their love for travel.

The number of tourists world-wide is keeping on rising. Middle class people and even people with limited income are making all kinds of efforts to travel. The next frontier for travelers is said to be the space, from traveling to the nearest moon to the deep inter stellar adventure.

According to the WTO, there are more than 1.4 billion tourists visiting many countries in our world every year. Out of this number only 67 million, 7% of the total, visit the African continent.

Having realized the economic benefits of tourism, many countries are heavily investing in various infrastructures and the social media. The more tourists come to a given country the more jobs are created. The tourism sector contributes a lot to the labor market of a country.

According to the World Travel and Tourism Council’s report of 2017, tourism generates 10% of employment around the world. That’s 1 in every 10 jobs. Globally, 109 million people work directly in travel and tourism — which is equivalent to the population of South Korea and Italy combined — not only as pilots, chefs, hotel staff, tour guides or on cruise ships, but as accountants, designers, and engineers for tourism companies, or supporting the industry with laundry services, food production or handicraft making. A further 183 million indirectly depend on the taxes and spending of these tourism employees for their jobs. The tourism industry in developing countries plays a prominent role in the development of those countries’ economies as it practically provides job opportunities to skilled, semiskilled and unskilled working people.

The top ten countries that depend on travel and tourism for employment are predominantly islands, seven of which are in the Caribbean. The Indian Ocean destinations of Maldives and Seychelles are also in the list as is the gambling hotspot Macau. The economic importance of tourism to islands, particularly ‘Small Island developing states’ (as identified by the UN) cannot be underestimated, and in 2015 the UN itself highlighted the role of tourism in providing sustainable livelihoods in its ambitious Sustainable Development Goals.

Other notable countries among the top ten, which almost entirely depend on travel and tourism, are the Caribbean islands, Seychelles, Cambodia, Albania, New Zealand and Mexico

The Eritrean Association of Tourism Services has decided to dedicate this auspicious occasion to the “Aba Shawel” Sub zone within the Central Zone. While the majority of the buildings in Asmara enjoy the engineering feat of the Art Deco that won the UNESCO recognition in 2017, “Aba Shawel” appears to have missed such an opportunity. However, there is the trace of the indigenous people dexterity in creating their own style of structural shelter, which kept them in absolute harmony for centuries.

Yet the most significant aspect of Aba Shawel is the unique social cohesiveness that kept the residents united. In their place there is no individualism as such.

People live in harmony and they share, in most cases, every bit of supply that comes their way. Their crowdedness is not a threat but an opportunity to mingle, socialize and share.

An area that lacks the parameters of good town planning will be vulnerable to the adverse effects of natural and manmade calamities such as earth quakes and fire. In such emergency encounters it will be difficult to deploy firefighting trucks and ambulances. Rescuers will find it difficult to find a leeway.

By the mid 1960’s some partial efforts were made to open an adequate space of streets by piercing through the crowded houses and narrow streets of Aba Shawel. As a consequence some houses were demolished and the occupants had to be relocated to Haz Haz. The residents felt that their integrity was being destroyed. They showed formidable resistance.

The style of living in Aba Shawel has pretty much remained the same, marked by unity and integrity.

Many famous men and women have emerged from Aba Shawel. Great artists, business people and people in high profile have their roots in Aba Shawel.

As a country continues to grow the face of slum areas will naturally be affected by the redesigning in the town planning. Such a move is likely to enhance the wellbeing of the citizens in general. No matter how much modernization may engulf the Eritrean people, their cohesiveness and life sharing style will continue unabated for years to come.

One of the striking features of attracting tourists is “Peace”, which Eritrea has in abundance. With “Peace” tourists will enjoy the culture, architecture, gastronomy, landscape, events, shopping, and many more. These features attract people to the destination and contribute to the overall experience of the trip. Ultimately the flow of tourists will continue to rise, thereby creating the opportunity of many jobs and better future for all. Eritrea remains a dreamland of tourist destination. Welcome to Eritrea!!!!

Tags: Tourism and Jobs: A better future for all