The True Origin of Habesha 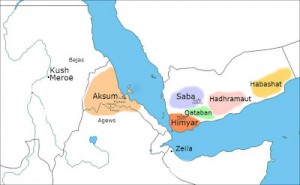 For over two millenniums, the word ‘Habesha’ and its numerous variants (Habashat, Habasa, Habesh, Habeshi, Abesha) have been used to name geographical pockets of territory and people extending from the Arabian Peninsula to the furthest limits of the Horn of Africa region. Although the word is of great antiquity, there is no consensus on what it actually means. In order to understand why this is the case, we must first look back at its origins.

Most of the earliest inscriptions mentioning Habesha deal with wars, alliances and peace treaties among rivaling Yemeni kingdoms – this reference below is no different:

This inscription tells us that Shamir of Dhu-Raydan, who is almost certainly the Himyarite king Shamir Yuhahmid, requested assistance from the Habashat clans to go to war with Saba, a rivaling Yemeni kingdom. The inscription also credits Ilmuqah, who was the Sun God that most inhabitants on both sides of the Red Sea worshiped, for granting them victory over their Sabaean rivals.

According to Dr. Eduard Glaser, a renowned Austrian epigraphist and historian, Habeshas were originally from southeastern Yemen who lived east of the Hadhramaut kingdom in the modern district of Mahra.[2] He believed the etymology of Habesha must have derived from the Mahri language which means “gatherers” [2] (as in gatherers of incense). He asserted that the Mahrites and their language should be regarded as the descendants of the people and speech of ancient Habeshas.[2]

Side note: Here’s a brief video showcasing Mahri, an ancient Semitic language Dr. Glaser believed to be the original language of the Habashats.

While it may be a stretch to claim who the direct descendants are based on scant Sabaean-Himyaritic inscriptions made two thousand years ago, Dr. Glaser seems to be right in claiming the original Habeshas were from Yemen. In fact, the earliest mention of the word Habesha in the Horn of Africa was only in the 4th century CE by the Aksumite king Ezana. After conquering neighboring kingdoms and territories on both sides of the Red Sea, Ezana styled himself as:

“Ezana, king of Aksum, and of Himyar, and Kasu, and Saba, and Habashat, and Raydan, and Salhen and Tsiamo, and Beja, the King of Kings”[3]

Definition of names referred in quotes

In reference to Ezana’s inscription, Professor Max Müller, a German philologist, believed the King of the Habashat had no common territory with the King of Aksum and the two kingdoms were separate appeared evident to him.[4] He points out that since both the kingdoms named before and after Habashat are found in Arabia it was clear to him that the Habashats were in Arabia as well.[5]

Based on the inscriptions the Aksumites left behind, they certainly did not regard themselves or their territory as Habesha. For them, Habeshas likely meant people who collected incense in South Arabia. Even Cosmas Indicopleustes, the famous Greak-speaking Egyptian traveler who visited the Aksumite kingdom in 525 CE, made no reference to Habesha.[6] So it raises a question: when was Habesha used in reference to the Horn?

It was not until long after Aksumite kingdom had ended that Arab travelers and geographers began to describe the Horn region and its inhabitants as Habeshas. The first among these travelers was Al-Ya’qubi, who visited the region in 872 CE. From his chronicles, we learn there were five independent and rivaling Beja kingdoms in present-day Eritrea and that ‘Habeshas’ were living alongside them. He also mentions an important Habesha capital near the Eritrean coast called Ku’bar (the site is still undiscovered but it’s believed to be in Eritrea).[7]

Al-Ya`qubi describes the Eritrean highlands and seacoast as:

“a vast and powerful country. Its royal town is Ku`bar. The Arabs go their to trade. They have big towns and their sea coast is called Dahlak. All the kings of the Habasha country are subject to the Great King (al-malik al-a`zam) and are careful to obey him and pay tribute.”[8]

Decades later, Al-Mas`udi, a tenth-century Arab traveler to the region, gives a similar account in his geographical work Muruj al-Dhahab, the `Meadows of Gold’.

“The chief town of the Habasha is called Ku`bar, which is a large town and the residence of the najashi (nagassi; king), whose empire extends to the coasts opposite the Yemen, and possesses such towns as Zayla, Dahlak and Nasi.” [8]

Centuries later, another Arab traveler, Al-Harrani, writes in 1295 CE that:

“one of the greatest and best-known towns is Ka`bar, which is the royal town of the najashi . . . Zayla`, a town on the coast of the Red Sea, is a very populous commercial centre. . . . Opposite al-Yaman there is also a big town, which is the sea-port from which the Habasha crossed the sea to al-Yaman, and nearby is the island of `Aql.”[8]

It should be noted that Habesha was frequently used as mere geographical expressions by early Arab and European travelers in much the same way as the entire eastern African littoral, including much of the Horn, was once encompassed within the term ‘Azania’. As geographical expressions, they were once convenient and representative of deep-seated ignorance of the region as a whole, although they may also have been informed by local indigenous ‘knowledge’.

Arab travelers’ accounts show Habesha was embraced by some of the local inhabitants of the region by the mid-9th century CE. In order to make sense of this, early European historians hypothesized the highland regions of Eritrea and northern Ethiopia must have mixed with large groups of people from ancient Yemen. Despite lacking tangible evidence, this narrative has persisted among many historians and the general population. However, new discoveries by archaeologist indicate the people of the Horn adopted material culture and deities from South Arabia not as result of mixing, but because they were “within the religious and economic orbit of greater Saba and local people took up various aspects of the material culture to signify their membership in this broader community.” [9]

Side note: Dating back to 800 BCE, the Ona sites (located near Asmara’s Sembel district) were the first settled civilization in the Horn of Africa. According to archaeologist Peter R. Schmidt it was this civilization and not sites in Arabia that were the vital precursors to urban developments in Southern highlands of Eritrea and northern Ethiopia later in the first millennium BCE.

In addition to being influenced by their Red Sea neighbors, their decline may have been the cause for the adoption of the word Habesha. By the end of the 8th century CE, most of the prominent Yemeni kingdoms ended and areas they once controlled were under foreign occupation. Yemen’s turbulence, coupled with its ecological volatility likely shifted the international trade of incense from South Arabia to the Horn region. With Habasha originally used to describe people who gathered incense, this term was also given to the region by early Arab merchants and travelers as a geographic expression that some of the inhabitants of the Horn adopted over time.

Similarly, European travelers and missionaries had a similar experience with the term Abyssinia.  When Portuguese missionaries arrived in the interior of what is present-day Ethiopia in the early 16th century CE, they took the altered word Abesha (without the letter “H” beginning) which is used by Amharic speakers and subsequently Latinized it to ‘Abassia’, ‘Abassinos’, ‘Abessina’ and finally into ‘Abyssina’.[10] This Abyssinia term was widely used as a geographic expression for centuries, even though it was a term not used by the local inhabitants.

In modern times, Habesha has become a complex phrase that has specific social, geographical and sometimes political connotations. Its lack of a consensus definition leaves it quite vulnerable to constant modifications and interpretations. More concerning of late is the politicization of the word by Ethiopianist who have been repackaging the term to mean anyone from Ethiopia and Eritrea despite the fact that majority people in both countries do not regard themselves with the term.

So what does Habesha mean?

Habesha is not an ethnicity; it’s not a country; nor is there a common language or religion they collectively follow. Many Eritrean youths even argue its an obsolete term that undermines their national identity. Because of these differences, it’s incredibly difficult to give a definition that satisfies all groups equally. Perhaps the best way to define it is by not trying at all. Habesha in many ways is a state of mind – hard to describe, but you know it when you see it.

Tags: The True Origin of Habesha