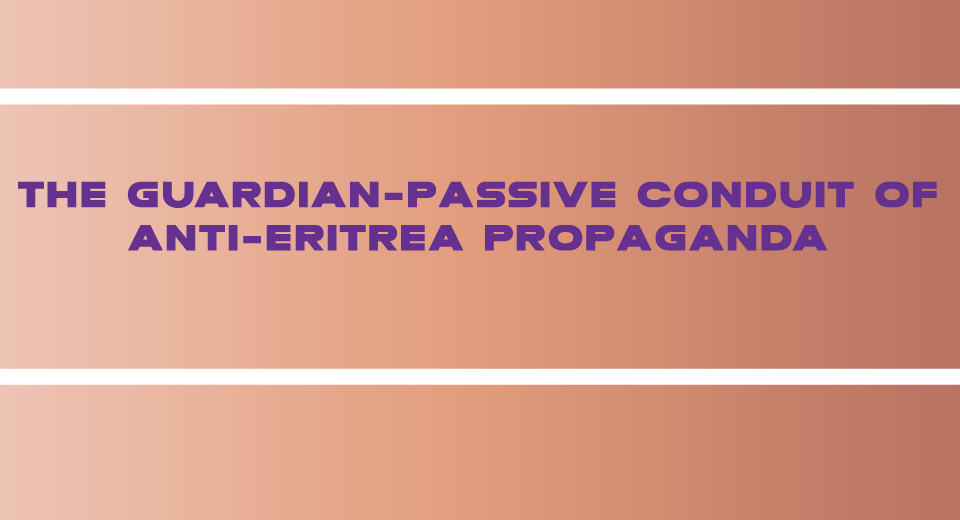 The last few months have been exciting and full of jubilation in Eritrea – so why is the Guardian still stuck in its outdated narrative of this Horn of Africa country?

Eritrea and Ethiopia signed aPeace Declaration in July officially ending twenty years of instability and tension. Since then, regular flights resumed between the two capitals and the borders have opened for people of both countries to travel freely.

Since the Peace Declaration was signed, Asmara has been busy hosting statesmen of Ethiopia, South Sudan, Somalia, Egypt and most recently Italy. In just a few months, the tumultuous region has made significant leaps towards peace and sustainable partnerships, which Eritrea has an undeniable significant role in. South Sudan, Somalia, Djibouti, Saudi Arabia and United Arab Emirates are all participating in the consolidation of peace in the Horn.

As a direct effect of Ethiopia’s refusal to accept the EEBC ruling and its continuous support by the international community, Eritrea bore the brunt of the no-war no-peace predicament for two decades. This was worsened by the West’s hostile policies, imposing illegal sanctions on Eritrea and utilising international organisations to vilify the Eritrean government and its people. The Guardian failed to report the horrific abuse of human rights of the Eritrean people during the long years of colonisation and the war of freedom. Consequently, it remained silent whilst thousands of Eritreans were displaced or forcibly removed from Ethiopia during the war. It is now quite absurd that the Guardian portrays itself as a dear ally of the Eritrean plight.

At this historic time where Eritrea now finds itself at the dawn of a new era of peace, the Guardian continues to publish outdated articles with claims recycled from regime change activists that have been rebutted many times over. This obsolete neo-colonialist approach is nothing less than theatrical. Given that a Guardian reporter had been to Eritrea recently, there was an opportunity to explore the country and the brutal effects of the war and its aftermath.

Those who have visited Eritrea recently have presented a different narrative.

For example, several European fact finding missions to Eritrea (Danish, UK, Irish)say that what is reported about Eritrea is starkly different to the facts on the ground, a fact thathas been, time and again, confirmed by the Diplomatic community in Asmara. Recently, the German Ambassador to Eritrea, Andreas Zimmerman described the recent developments of peace as a very encouraging sign for Africa and the whole world but he also questioned whether everyone in Europe realises the significance of these developments. This rings very true for the Guardian, which continues to bury its head in the sand, and repeatdebunked narratives on Eritrea.

This begs the question, what is the Guardian’s motive for incessantly producing biased and negative stories on Eritrea, whilst barely reporting on factual concerns of human rights in other countries of the region or further beyond? The Guardian finds itself closely depicting a mouthpiece of a few groups that have found themselves irrelevant in this peace process and are working to sabotage it.

At a time when mainstream media is under fire for deliberate misinformation, it is high time that the Guardian reassesses its position to uphold ethical journalism or could face being branded another ‘fake news’ media outlet.