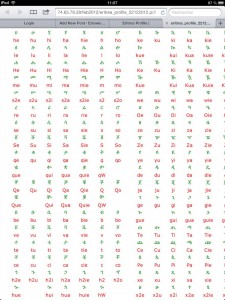 Either by coincidence or in interaction, the emergence and decline of both the Copt and Geez languages takes similar if not identical course of time. The last phase of the Egyptian literary voyage gave rise to the new Demotic linguistic revolution in 700 B.C. The advent of a new language, Copt, with the adaption of the Greek alphabets followed in around 2nd century AD. Subsequently it faded away in 14th century A.D. and began to live only as a liturgical language.
Simultaneously, Ge’ez language in Midre Agaazit (present day Eritrea) began to evolve in around 500 B.C and became popular in the early centuries AD with the advent of Christianity in the land. By 15th century AD, Geez had retired and remained only a liturgical language.

My intention is not to make an analogy between the Geez and Coptic languages, for this is a subject liable to deeper studies. It is however to try to introduce The Ge’ez language and to look at the literary journey it took, its influence by the Arab and Greek literature and how it emerged out independently in the end.

About the language Over 2,000 languages in the world are dead today. Likewise, the ancient Eritrean language, Ge’ez, is no longer a communicating language, and it is on the verge of extinction even as a liturgical language.

One of the ancient languages in East Africa, the Ge’ez language is only one of the few African languages that have their own letters. As asserted by most linguistics, Ge’ez is classified as a Semitic language. Over 1,000 years ago, it was the official communicating language in the ancient Eritrea, Mdre Agaazit. Some archeological findings that affirm this truth are the inscriptions of Belew Kelow and Adulis. Looking at inscriptions of south Arab archaic remains, like for instance Yemeni inscriptions, we still find the same letters. This bespeaks to the assertion that Ge’ez language was derived from the Sabean language.

Centuries ago, an offshoot of the Sabean kingdom was in the North- ern ancient Eritrea, Midre Agaazit. Ge’ez served as the official lan- guage of the kingdom and depend- ing on this historical fact, linguists suggested that Geez was the mixed form of the Sabean, Arabic, and Greek languages. However at this century some ideas that defend this assertion are emerging.

Tigre, Tigrinya and Amharic are the languages that are most related to Ge’ez. They are believed to be descendants of Geez and some linguistics believe they have the same age with G’eez.One of the giant characteristics of the language is the monopoly of its own letters with their original shapes. The 26 letters of the Ge’ez alphabet are not imitated from any other language. This makes it a special language in Africa that took the honor of having its own letters.

For instance, most of the African tongues use Latin letters in their language, as goes for the European languages. However, Ge’ez language has its own inventive letters. This might even be primary evidence that the language is among the most ancient languages of the world.

Another significant trait of the language is its success to blend two sounds of a language, vowels and consonants, in one letter. This contributes to writing more ideas using fewer words. Consequently, the verb formation, syntactic and grammatical system of the language is much civilized than expected.

Deep within the melodic world, the language still stands striking and cultured; it has its own Chants. The chants are not only different but also artistic. These melodies are called qine and against every ones expectation, they have their own musical notes. These notes help the deacons and priests to recite the chants easily Although much emphasis has not been given to this language, the few researches so far made serve as precursors telling Ge’ez is as an- cient as the old languages of Africa. Hence, it must be studied deeply.