The Emergence Of The EPLF As A political power    Saved The Geopolitical Interests Of Eritrea”: PFDJ Secretary Mr. Alamin Mohammed Seid 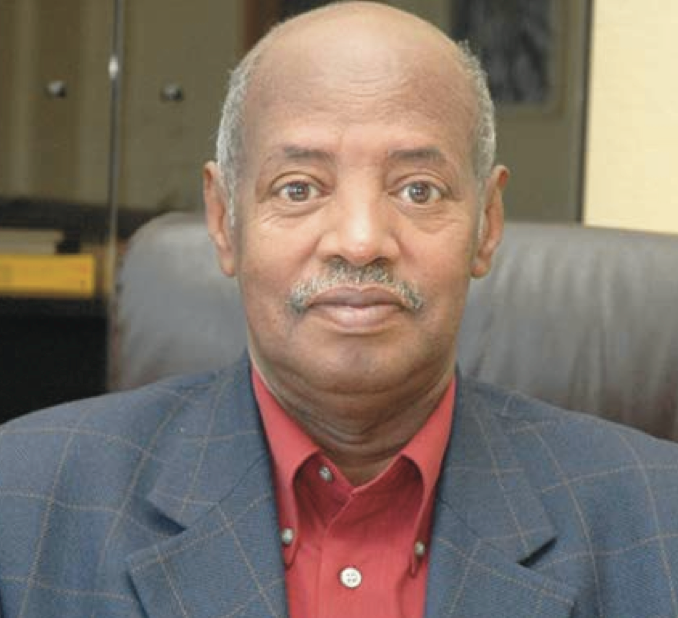 Exactly 25 years before the EPLF staged a lightening offensive against the largest and greatest army of the Derg, the Nadew command. Many historians compare this offensive so worlds’ greatest victory- like what Basil Davidson, reffered the offen- sive as the african Dien Bien Phu. Commemorating this special event, Mr. Alamin Mohammed Seid, Sec- retary of the PFDJ, conducted an extensive interview with the local Medias. Excerpts of the first Part of the interview follow:

Mr. Alamin Mohammed Seid, first of all we would like to thank you for granting us time for this interview. As the questions are extensive, we will attempt to address them stage by stage. The first stage covers the period between 1977 and 1987, where many political and military developments were seen. It was also a stage where the Eritrean People’s Liberation Front (EPLF), due to the intervention of the Soviet Union, had to retreat from many areas it had lib- erated. How can you describe the situation during that stage?

I would first like to express how good it feels to have this meeting on this occasion. It is very important today to look 25 years back and ana- lyze the circumstances then. If we are going to talk about the demise or fall of the Nadew Front (or what we call the Nakfa Front) and the libera- tion of Afabet, we need to trace back the circumstances before it see the situation between 1977 and 1987, so just we can have a whole picture.

How was this front annihilated? What are the victories reaped from it? How did the circumstance itself come into being? It is significant to see these questions in all dimensions one by one.

One of the things we have to men- tion is that things had changed af- ter the Strategic Retreat. As history witnessed it, at first, meaning until

1977, the upper hand was of the Eritrean Revolution, particularly of the EPLF. However, after that things changed. One of the most important changes within the 10 years was the unification of the different parties in the Eritrean Revolution through the Second Organizational Con- gress. After that the struggle began to follow the path that the EPLF had chosen and was committed to. This is not to say there hadn’t been any attempts for the unification earlier to that however the Second Organiza- tional Congress was a turning point.

Another significant change within this period was the intervention of the Soviet Union. This intrusion of foreign powers could be called two strategies. This means, there were the enemy and its allies who are against the rights of the people of Eritrea (the Soviet Union and its followers, South Yemen, some Pal- estinian organizations and others) on one side and the EPLF and all freedom fighters within the Eritrean Revolution on the other.

The conflict and discrepancy was therefore between these two forces. This stage was very complicated and challenging. But how did the EPLF get pass this stage? First and for most it was passed because all the nation- alist Eritreans, whether those within The EPLF, The ELF, or any other or- ganizations, stood united against the foreign offensives directed against Eritrea on one hand and against those who were following the under nationalistic path within The Eri- trean Revolution on the other. This stage could be called historical as it was the stage where the righteous nationalists were verified.

Another happenstance with n these ten years was the famine. This famine was challenging in every di- mension. It was challenging for the people of Eritrea, challenging for The EPLF, and challenging even to the entire horn of Africa. However the EPLF got through those rough days by providing the basic needs like food and medicine to our people who were stranded without any sup-

plies. We can say efficient manage- ment and frugal allocation of things got The EPLF through that harsh period.

Another thing that can be men- tioned in this period is the achieve- ment in increasing political aware- ness. From 1977 to 1987 political consciousness was awakened sig- nificantly. Effective political cam- paign on both the freedom fighters and the people was successfully un- der taken. I mean think about it! To retreat back to Sahel from Seydichi! The Strategic Retreat was a miracle by itself. If we ask whose miracle it was, well it was a miracle all na- tionalists who were operating within The EPLF and those who were doing other heroic deeds elsewhere. It is their courage, potency and sacrifice that got us where we are now. One of the challenges in those days was finding a way to revive the people’s spirit. How can different socials forces, farmers, students, workers, and others be organized? It was not easy organizing these groups to play their roles and fulfill their duty. At that stage giving the people political power was a big task. The strategy of The EPLF was liberating the land and the people gradually. What does liberating the land and the people gradually mean? It means after lib- erating the land making the inhab- itants have political power in ad- ministering their area; establishing people’s assembly, the challenges of establishing elder’s council wasn’t easy. The ultimate goal of this was to implement the basic motto of The EPLF which says “Let the mass be conscious, organized and armed.” First how does the mass become conscious, how is it organized af- ter that, and get armed in the end? These were the basics.

Tireless efforts were also exerted at that stage in securing the role of women. This doesn’t mean women didn’t have any role prior to that. However, it was at the phase of 1977 up to 1987, a significantly vast work

that had women in the core was done in facing the enemy in political and military arenas and fighting against the backward attitudes against wom- en. Therefore the view of the EPLF is concerned we can say Eritrean women have played their role by the encouragement of the EPLF, under the programmes of the front.

Another thing that cannot be overlooked within this period is to smother the Eritrean revolution from two sides and the successful effort of the EPLF against this conspiracy. Squeezing the life out of the revolu- tion in the military arena and stifling the EPLF in the media and diplo- matic arena by demonizing it were the agenda of the double bladed con- spiracy. In this arena just like all the others the EPLF reorganized to its best capacity and renewed its plans and accomplished effective politi- cal and diplomatic tasks in and out of Eritrea. That meant reflecting the aim and legitimacy of the struggle of Eritreans.

To the contrary, at a time when the EPLF had withdrawn to North Eastern Sahel and the enemy had reoccupied several cities and towns, with many people losing hope for the struggle, the EPLF was able to continue working with clear and de- fined policies.

In short this stage was one where the EPLF foiled consecutive of- fensives and managed to build its “People’s Army.” That was really an indescribable feat, and het, the EPLF was able to pull it through.

There are issues in this stage that we need to address. Times during the Russian intervention in 1977, 1978 were hard and intricate: what was the secret that enabled the EPLF to remain solid and organized?

The secret was mainly he Eritrean resilience during that bitter stage. In 1977, 95% of the Eritrean terri- tory was controlled by the Eritrean Revolution with 90% being under the EPLF. Then came the foreign in- tervention and we had to withdraw from all of that.

Ethiopian regimes are always in a habit of seeking foreign support. Emperor Menelik sought the help of the British and others to consolidate his power. Haileselasie similarly had the support of western powers to consolidate his grip in power during the Second World War. Eritrea was made to be federated with Ethiopia by the West and the US in particu- lar.

When the Dergue regime failed and ran out of options in 1977, it sought the assistance of the Soviet Union and never before seen mas- sive military support started flowing from Moscow to Addis Ababa, then ferried or airlifted to Asmara. In such a situation to be able to maintain your potency, despite having with- drawn from 90% of Eritrea that was in your domain, was an illustration of a tolerant and wise leadership. And as history has shown this was realized through martyrdom, brav- ery, courage and faith in the EPLF. 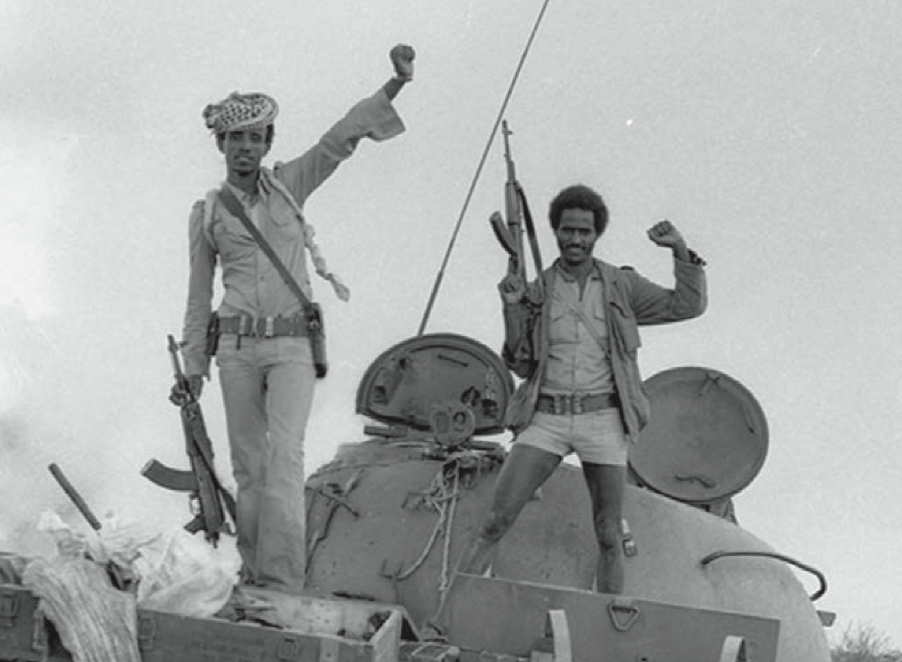 Even today, regardless of what stage lies ahead of us, if we are go- ing to work all we need to do is to make the necessary adjustments and further strengthen the EPLF policies and I am sure that we will succeed in the remaining phases.

Back in those times, the Eri- trean revolution was isolated and unaccepted by both the Eastern and Western Camps. It was even said to be “com- mitting suicide.” What was it that both camps could not really see? And how can you relate the revolution that was deliberately wronged with the one that strived to con- tinue?

Eritrea is located in the Red Sea region in the Horn of Africa, which is a location

of geopolitical interests. So if you are to control the Red Sea, the Horn and even the Indian Ocean, you need to have access to Eritrea. And that was the problem for the Eastern camp, Western camp and others. And protecting their vested interests in the Red Sea or the Horn was definitely not the EPLF or the Eritrean Revolution, but the military regime in Ethio- pia. It was first tried with Haileselassie but the plan failed with his demise. And then came the military junta, which was pampered with

all types of help. On top of that, the powers decided that if their geopolitical interests were to be secured the Eri- trean revolution or the EPLF had to be eliminated. But the EPLF was native owner to the land and its people fierce fighters since the 1940s.

Generally speaking, Eri- treans as a people owe their present stage to the EPLF. The emergence of the EPLF as a political power saved the geopolitical interests of Eri- trea. And I believe that what- ever is left will also be dealt with by the People’s Front.