The long waited moment has finally arrived ! After days and weeks of impatience, London officially became the Olympic city for two weeks (27.07-12.08) with the opening ceremony of the games. Spectacle guaranteed ! Here we go ! After  7  years of work, a cost of 12 billion euros and  for transportation and security, Queen Elizabeth II finally gave the kickoff of the London Olympics. To everyone’s surprise, the Olympic cauldron was lit by a group of seven young British hopes. “I declare open the Games in London celebrating the 30th Olympiad of the modern .” With these words of his traditional flute – like voice to the Stratford stage, in front of 80,000 spectators and more than one billion viewers, the Queen signed a record both Olympic and family.Indeed, London is the first city in the world to achieve the treble. The Summer Games of 1908 and 1948 respectively had been inaugurated by the great grandfather of Queen, Edward VII, and her father George VI. As is customary.

The Greek delegation led the parade of nations during which paraded some of the estimated 10,500 athletes from 204 countries.

At the head of the ERITREAN delegation, Zeresenay Tadese, had the honor of carrying the flag at this memorable show. 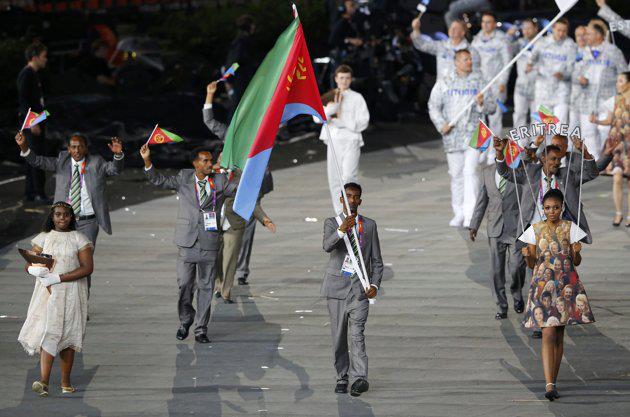 Zeresenay Tadese , and Teklemariam Medhin (Hazega) might try to for the 5000 as they already have got the minima or qualification standard.

Weynay Gebreselassie 03rd August 2012 first Hit round one and final will be on the 05thAugust 21:25

The Eritrean Team are so far understood to be in great shape both Emotiionally and physically, and they are being coached by the individuals stated below.