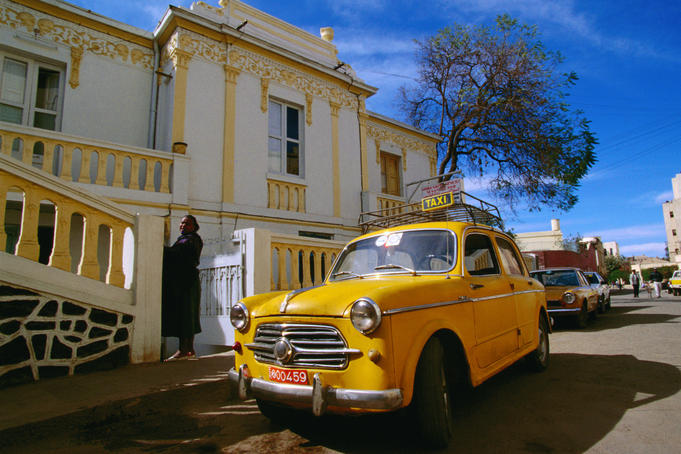 Stalinist-style buildings were slated by contemporaries even as they were erected in post-WWII Berlin; architecture on Karl-Marx-Allee was mockingly dubbed ‘wedding-cake style’. No surprises that now communism is kaput, Soviet-era hallmarks have been preserved with a degree of tongue-in-cheek. Preservation wasn’t easy: following the Fall many favoured obliterating communist architecture. Now if Soviet sights are your thing you can, besides visiting the Wall, catch live music at the old Träenenpalast (‘hall of tears’; where families said farewells near the Wall), see a movie at communist cinema Kino International or experience the DDR Museum, where exhibits even allow you to get spied on by the Stasi.

Soon after pre-Fall film The Lives of Others was released in 2006, Ostel, self-styled ‘Der DDR design hotel’ opened its doors. Secure a stay in its communist-themed rooms.

Now it’s a colonial gem of the Andes rivalling Cuzco for majesty; 20 years ago it was the heart of the Shining Path terrorist movement that decimated the Peruvian highlands, with travellers steering well clear. The turnaround in Ayacucho has been monumental: paved roads only reached here in 1999. Since then tatty house facades have been spruced up and streets pedestrianised to get that idyllic, untouched-by-time feeling flowing again through the city. A cluster of chic-but-cheap hotels and restaurants have opened too, all in complete harmony with the buzzing colonial vibe.

Cream of the crop of charismatic colonial accommodation in Ayacucho is Hotel Santa Rosa. Check their Spanish-language website or call in (Lima 166, Ayacucho).

Rallying from devastation is typical of Beirut: a city set back by two major conflicts in the last 30 years. Still, incredibly, meze and macchiatos are served up from its relaxed restaurants and cafes in a downtown rebuilt to its former grandeur. Hamra, a hotbed of Lebanon’s civil war, now has shops and clubs favoured by an international following of fashionistas and partygoers. Formerly on the front line, Beirut National Museum was torn apart by militia fighting: renovation has seen the museum regain its status as a world-famous cultural centre. Much like the city as a whole, actually.

At the heart of downtown, Etoile Suites has individually-designed rooms and a rooftop terrace.

Many who have glimpsed visually-arresting Asmara call it Africa’s most beautiful city due to its innovative art deco architecture, built by Mussolini during his unsuccessful campaign to create a second Roman empire. For much of the last 50 years, however, Eritrea was embroiled in war with neighbouring Ethiopia, first for independence and then over territory. Tensions between the countries remain, but the Eritrean capital is no longer off-limits. Its treasure trove of beautiful buildings now beg for discovery, including Benito’s old party headquarters and Fiat Tagliero, a futuristic fuel station shaped like a plane poised for take-off.

Few hotels in Asmara have their own websites: instead visit www.asmera.nl for intriguing information on the city covering accommodation to architecture.

When the ‘Glasgow’s miles better’ campaign launched in 1983, the city was being mentioned in the same breath as ‘knife crime’ and ‘decay’. Campaign slogans, most famously fixed to rusting gasworks in the industrial outskirts, initially seemed far-fetched: yet they worked. Glasgow reinvented itself and was soon winning accolades like European City of Culture. Championing industrial heritage became integral to new-look Glasgow. The once-grim River Clyde, heart of the city’s post-WWII slump, has morphed into its cultural focal point with museums replacing derelict docklands. Ambling today through a centre of astounding architecture and cool cafe-bars, it’s hard to imagine the bad times ever existed.

Trundle down the Clyde in the spirit of Glasgow’s 19th-century entrepreneurs on the Waverley, the world’s last ocean-going paddle steamer.

Beleaguered by earthquakes and blitzed during the Nicaraguan Revolution, it’s a wonder León has emerged from the ashes of its all-too-recent past with anything left worth seeing, let alone oozing colonial charm. When it became the Revolution’s first city to fall to Sandinistas, then-president Somoza famously responded: ‘bomb everything that moves until it stops moving’. Plenty of signs from the conflict remain. Bullet holes from street fighting still riddle buildings; visit Museo de Tradiciones y Leyendas (Museum of Traditions and Legends) for an overview of the Sandinista rise to power.

What is it about badly bombed cities and vibrant underground music scenes? Not that Rotterdam has nothing else besides its tradition of top electronica and hip hop to tempt travellers: its resurgence following the WWII annihilation of its historic heart has been remarkable. The area once Blitzed has reinvented itself through cutting-edge design projects, recently including a series of colourful lights demarcating the limits of Luftwaffe bombardment. Blight took a while to become bite but cultural renaissance now pulsates through the 2007 City of Architecture, along with a feast of festivals celebrating everything from film to Caribbean carnival.

Dine out almost 100m up in Rotterdam’s highest building, Euromast.

Sequestered in a portion of Russia rarely visited by foreign travellers, Volgograd and tourism have rarely gone hand in hand. Having seen Volgograd reduced to rubble after the Battle of Stalingrad (as it was formerly known), the then-US ambassador would lament this a ‘dead city’, but Volgograd is proving there is life after death. The battlefield is now renowned as an immense park of monuments to the Soviets that defended the city, crowned by the formidable 85m-tall Motherland Statue. Volgograd is a smart city but will never be a looker like St Petersburg – come instead for a moving crash course in WWII history at the many memorials and museums.

Yellowknife rose to riches when gold was discovered nearby and slumped right back when gold-mining waned during the 1990s. Now the metropolis of Canada’s Northwest Territories (population almost 20,000) has again put its dark days behind it. Thanks to a diamond boom the economy is as buoyant as a Hudson Bay seal pup and the town is reaping the benefits. Now a state-of-the-art heritage centre looks back fondly on the gold rush. Meanwhile, in quirky Old Town (known as ‘The Rock’), designer architecture is replacing the ramshackle huts of old; the wonderful Wildcat Cafe serves as a reminder of the town’s tough gold-prospecting times gone by.

Fish, kayak or go aurora-viewing on the lakes north of Yellowknife at the cozy Yellow Dog Lodge.

Ask anyone across the former Yugoslav nations: Belgrade is where the big night out is. Bombing during the Kosovo War along with one of the world’s worst-ever hyperinflations brought this city to its knees but the music scene survived, booming to make this one of Eastern Europe’s party capitals. Being the cradle of the 1980s Yugoslav New Wave got the ball rolling and Belgrade today is, from rock to rave, a magnet for music-lovers. Being repeatedly razed to the ground also fashioned a riveting cityscape for Belgrade – it’s a potpourri of ancient forts, neoclassic and modernist masterpieces.

Tune in to Belgrade’s classical music extravaganza, Bemus Festival, or go wild up the road at Novi Sad’s Exit Festival.