Symbol of resistance and perseverance of the Eritrean people : Nakfa

For every Eritrean Nakfa has a special meaning. Nakfa means endurance, perseverance and belief. Nakfa was a place where Eritrean liberation fighters put their strong belief and conviction that one day Eritrea will be an independent country where its people will walk proud as independent and free people in their own land. Nakfa was the foundation of the true State of Eritrea that we have today. When we celebrate our independence anniversary it is Nakfa that is cherished and remembered most for it was the foundation of all the successes the EPLF attained until the last day, 24th of May, 1991.

In 1977 Nakfa fell in the hands of the Eritrean People’s Liberation Front and remained under it until the end, Eritrean Independence. The trenches from huge rocks split by hoes and hammers and other small equipment defending Nakfa were built by the fighters amidst the aerial bombings and shelling. From the holding stations for the reserve groups, to underground care centers, command posts, to the never ending curves of trenches, every thing is breathtakingly inspiring.

The stone structures, dug deep underground, served not just as the protective shelters for the fighters, but became places where friendship were cemented, commitment and courage displayed, pain and hurt shared, and where the fate for Eritrea and her people was laid. From here the Eritrean freedom fighters have gone through trying times, endured and fought and clambered up a steep slope to prove themselves strong. The endurance they have displayed coupled with perseverance in the face of conspiracy has helped Eritreans outlast subjugation, dependence, indecency and other ignoble human qualities.

From Nakfa, right from 1977, a unique sense of nationalism, and nationhood was born, and the gallant fighters knew that nothing was to deter them to continue their struggle with determination to the end until the occupation forces are routed out from Eritrea. They knew within their hearts that whatever the circumstance their commitment, courage, tolerance, and readiness to face whatever challenge was what matters for them. 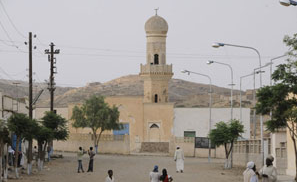 The attempts of the Ethiopian regime to recapture Nakfa miserably failed and the enemy forces became so weak that after Nakfa the major towns and cities of Eritrea, except Asmara, Massawa and Barentu, fell in the hands of the EPLF fighters. Asmara was encircled and was looking for its final day until the major powers including the former Soviet Union, Cuba, South Yemen and others came to the rescue of the Derge regime.

The Derge regime, which took power in Ethiopia as the result of power vacuum in that country after the fall of Haileselesie regime immediately claimed it was a communist regime and sided with the Soviet Union. The Soviets in return began to supply the Derge regime with whatever military hardware, fighter jets they felt enough to crash the EPLF forces.

They also trained hundred of thousands of soldiers. And in 1978, the Derge regime convinced it had the necessary military equipment and ready and trained personnel, launched its military operation through different fronts with different military task forces such as 501, 502, 503, and 505 military task forces. However, it was not easy to crash the Eritrean forces as simple as that. With all the military equipment, ground, air and naval forces coupled with interferences of foreign powers, the liberation forces were not found to give up easily. Hence, the Derge regime in its bid to destroy the EPLF had to launch seven separate offensives until it was totally impotent and easy to rout it out from the country.