STATEMENT : BY H.E. MR. OSMAN SALEH, MINISTER OF FOREIGN AFFAIRS OF THE STATE OF ERITREA, DURING THE UN GENERAL ASSEMBLY MEETING ON APPRAISAL OF THE GLOBAL PLAN OF ACTION TO COMBAT TRAFFICKING IN PERSON 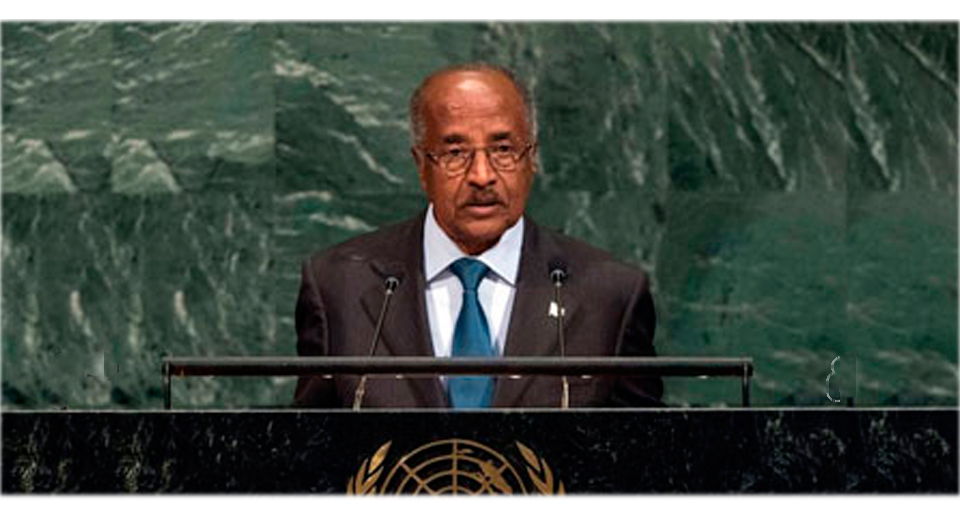 It is a great honor for me to address this Assembly on behalf of the Eritrean people and government who for the past half a centuryare resolutely fighting for human dignity and regional stability. They have been at the forefront of the struggle to combat and eradicate human trafficking in all its manifestations.

Eritrea welcomes the convening of this High-level meeting to appraise the implementation of the UN Global Plan of Action to Combat Trafficking in Persons. Periodic reviews could provide member countries with the opportunity to assess the progress made and deliberateon the challenges in the implementation of the Plan of Action. However, without focused international cooperationto eradicate the causesof human trafficking—extreme poverty, global inequality, the vulnerability of irregular migrants, conflicts and wars of aggression as well as sexual exploitation, cheap labor and organ harvesting—our next appraisal could be a discussion of gaps and not progress.

The interrelated crimes of human trafficking and smuggling of migrants are posing grave challenges to security and development of the Horn of Africa. Many people, especially youth, continue to fall victimsto criminal groups as they attempt tomigrate to Europe and the Gulf. They face abduction, extortion, gender related violence, torture and death. The dearth of regional understanding and robust cooperation between countries of the region and countries of destination has, until recently, meant impunity to the traffickers and smugglers.

The Eritrean government has for years called for an independent international body to investigate human trafficking in the Horn of Africa with the aim to bring those responsible to justice. Eritrea’s repeated requests to the UN Secretary General and UN Security Council to initiate such an investigation remains unheeded. Many of those responsible inthe trafficking of Eritreans continue to live in European countries and conduct their criminal activities with money they raise under the guise of supporting victims.

The recent announcement of Italian authority regarding collusionbetween human traffickers and individuals, ostensibly involved in rescuing of migrants in the Mediterranean Sea is atestimony.They are investigating a person whose involvement in smuggling of Eritrean migrants and his relations with human traffickers in East and North Africa has been known to the Eritrean government for years. More international effort is needed to ensure that no case of human trafficking goes unprosecuted. Each of those involved in the heinous crime of human trafficking must come under law and face punishment.

Let me assure you, the people and government of Eritrea will steadfastly continue their fight against human trafficking and smuggling and expose their sponsors. Eritrea will continue to work with the countries of the region bilaterally and within the African Union Horn of Africa Initiative as well as with European countries to eliminate this crime.

Tags: DURING THE UN GENERAL ASSEMBLY MEETING ON APPRAISAL OF THE GLOBAL PLAN OF ACTION TO COMBAT TRAFFICKING IN PERSONMinister of Foreign Affairs of the State of EritreaStatement by H.E. Mr. Osman Saleh