Eritrea and Ethiopia join in peace after two decades of hostilities 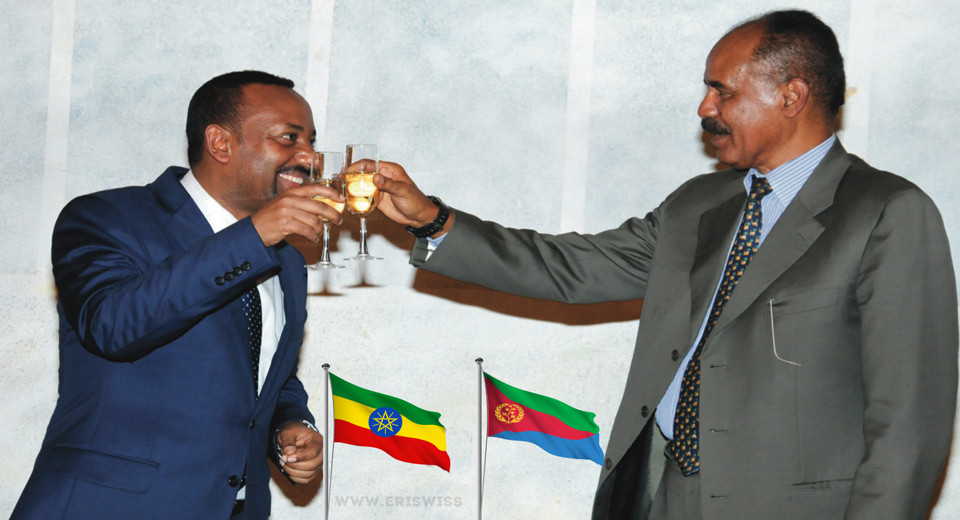 After twenty years of conflict the Eritrean and Ethiopian people are now officially at peace as President Isaias Afwerki and Prime Minster Abiy Ahmed join hands in brotherhood. As such, Sunday, July the 8th, became a historic day for Eritrea and Ethiopia. The two countries agree to work together for peace and development.

For the first time in almost a quarter of a century, Eritrea’s and Ethiopia’s national anthems, echoed from Asmara International Airport, Sunday 8th, at 9:00 AM.

Once in their car, on their way out of the airport, President Isaias took notice of veteran Eritrean footballers and national sports starts, among which, Olympian Zeriesenay Tadesse and young international star cyclist Merhawi Kudus. The leaders stepped down to salute the sports men.

Meanwhile, since early in the morning, communities from different parts of Asmara gathered in Semaetat Avenue and peacefully marched through Harinet Avenue and Bahti Meskerem Square shouting slogans of love both in Tigrigna and Amharic.

Om the news of the Ethiopian’s landing in Asmara International Airport, hundreds of thousands of people sprinted to stand on both sides of the avenues starting from the airport to the center of city. Citizens and foreigners of all ages flocked in the streets. It looked like nobody was left at home. But not only homes, the churches as well must have been emptied. Clergies had decided to take Sunday mass out to the streets to honor the guests.

The Eritrean people welcomed Dr. Abiy Ahmed and his message of peace, from the Ethiopian people, with utmost respect and sense of companionship. The Eritrean and Ethiopian flags were waving gloriously in the skies of Asmara. People wore shirts with pictures of both of the leaders and had their faces painted in the colors of the Ethiopian and Eritrean flag. Scarfs and head bandanas representing the flags were common too. Slogans of memorable catch phrases of both leaders, such as “Game Over” and “Love Wins” were pending from all sided.

Eritrean mothers, as crafty as they are, were busy coming up with traditional folk songs and rejoicing, dancing to them. It’s astonishing how fast they were composing folk songs highlighting the event. Some of the folk songs referred to Abiy Ahmed as “morning sunshine” and Isaias Afwerki as “Hub of Patience”.

The ride to the presidential palace, the final destination for the morning schedule, was slow as people were running after the motorcade. The leaders’ car had its windows down giving a chance for the people to shake hands with the leaders who made a longstanding dream come true.

Eritrea’s war disabled came out to the streets when the motorcade approached the area of Denden Camp. The people’s cheers reached the skies once the leaders bowed in respect.

The motorcade approached, Fiat Tagliero, an architectural marvel, and the number of people coming to the streets r rose notably. Young and old, literally, run after the motorcade to the center of the city like children in a big playground.

Starting from Shida, to the City Park and the Cattedrale, people didn’t have enough space to stand on both feet. The streets were crowded and the motorcade was plainly surrounded by people of all ages.

Asmara’s icon, Cattedrale, cheered the news of peace when the motorcade approached it with its colossal bells ringing, adding melody to the glorified roars of Eritreans. The flow was the same while the motorcade toured the city until it reached and entered the presidential palace.

Meanwhile, outside in the streets, the merriments continued with heightened spirit as the crowds danced and screamed in joy. Everyone was celebrating in different ways, tone and languages but one thing the hundreds of thousands of individuals had in common were tears of joy. People cried and comforted one another in each other’s hugs.

I stepped out of the presidential palace to talk to people and conduct interviews with a special focus on young people, but I couldn’t get a decent conversation. People pulled me in their hugs and dances, and for a while, I stopped being a journalist and celebrated the news of peace and the thought of being a free young Eritrean identically to fellow young Eritreans.

A group of young men in their early thirties attracted a big crowd. These young men, members of the eighth round to Sawa, dressed to impress in suits and traditional clothes for the day. They had made an appointment to meet in Harinet Avenue to pay tribute to their friends who didn’t make it alive from the war. While they cried in a mix of painful memories, replaced by joy, they put their fallen martyr friends, comrades, to finally rest in peace.

Streets were blocked. Cars and people roamed mindlessly through the city to the glory of peace till late in the afternoon. Happy would be too little of a word to explain the situation. It was actually a blissful euphoria that dominated Asmara. Simultaneously, all major cities and small towns of Eritrea were in the same state of jubilation. In Massawa and Assab, the Eri-Ethio flags, dashed from civilian boats through the waves of the Red Sea.

In the afternoon, following a short break at Asmara Palace Hotel, the Ethiopian delegation made its way to the Presidential Palace. President Isaias offered, then, a spontaneous invitation to his house. He took the guests to his house where they caught his family in pajamas rejoicing in the typical Sunday family day afternoon coffee ceremony. Welcoming guests with what you have is a tradition Eritreans are known for.

Hospitality is a norm. Likewise, the President’s family and his neighbors hosted the Prime Minister, Eritrean ministers and the Ethiopian delegation to their humble family living room. Minister Askalu Menkerios made her way to the kitchen and helped with setting the table. While, the youngest, Dr. Abiy, handed snacks that traditionally are served side by side the coffee ceremony, typical, of Eritrean and Ethiopian families. As the guests made their way out, President Isaias’s neighbors gathered in the president’s house’s yard, door step, to greet the unexpected guest next door, with flowers and snacks.

In summer a taste of the seasonal fruit, Beles, is mandatory. Therefore, the delegation’s next destination was down the roads to Massawa right outside of Asmara.

In the evening hours a state dinner was organized in honor of Dr. Abiy. The event was highlighted by fraternal speeches from the leaders directed at both the Eritrean and Ethiopian people. In his speech, President Isaias, applauded Dr. Abiy’s bravery in coming forth with peace, referring to the unrestrained and enthusiastic emotions of Eritreans out on the streets as the true meaning of what Eritrea is all about. Dr. Abiy, on his part, expressed Asmara’s and Addis Ababa’s readiness for greatness. He also expressed deep sorrow for the humanitarian damages the war brought upon Eritrean families.

That night, bars and clubs of Asmara were packed more than ever. Countless partiers paused their parties for a while and cheered Dr. Abiy on his way to his hotel after the state dinner. He was greeted, once more, in the morning, as the motorcade headed to Denden State Hall.

On July 9th, the people of Asmara held their breath as Ethiopia and Eritrea signed a joint declaration of peace and friendship. The two countries agreed to sail towards development, peace and stability at regional level. Moreover, according to the joint agreement, diplomatic relations are to be restored between the two countries as trade, communication and transport will resume and embassies will be opened.

President Isaias Afwerki and Prime Minister Dr. Abiy Ahmed discussed issues of collaboration, regional stability and harmony as well as economic advancements. The leaders also shared visions to the interest of the Eritrean and Ethiopian youth in their academic and professional endeavors.

The past couple of days were genuinely emotional to the people of Eritrea. A huge burden has been lifted from the two people who have missed each other dearly and now can see in each other’s eyes past feelings of hatred or resentments.

On the same day, telephone lines between Ethiopia and Eritrea were opened. Families in both sides made the lines busy for the first time in more than twenty years. But new friendships were being made across both countries… I was packing to leave the office at around midnight. The office’s phone rang out of my expectation. I picked the phone to hear a group of people screaming merriments in Amharic. I roughly understood their greetings, but still, replied in my language. We were using the little we know of our respective languages to say peace –selam and love you. And just like me, many more Eritreans have been getting random calls from Ethiopian people and vice-versa.
Eritreans have been referring to this day as the second 24th of May. Congratulations to us all. Patience and resilience pays off greatly.