SANGANENE: Conflict Resolution at Its Best 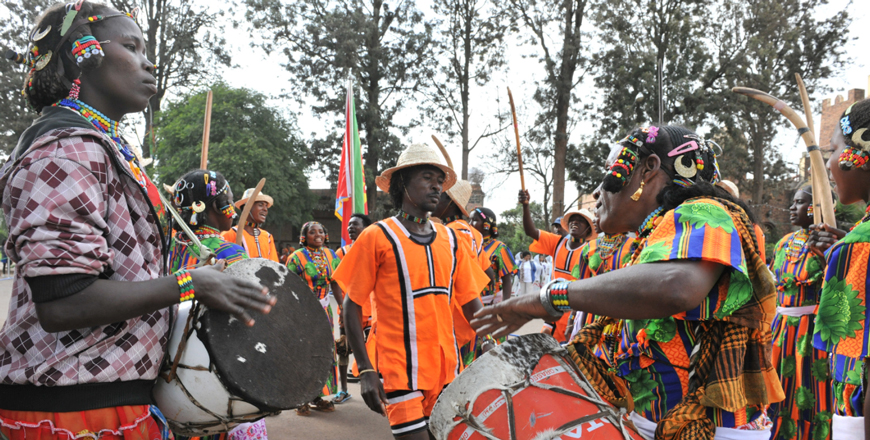 Amongst the Kunama ethnic group in Eritrea, there are people called Sanganene. Sanganene is the plural form for Sanganena. There can only be one Sanganena in any Kunama community at a time.

Sanganene is a family that only deals with reconciliation. If a murder occurs, all the reconciliation process is processed by the Sanganene family. The practice of San- ganene dates back over 2000 years and the elders of some villages say that the concept of Sanganene came into being during times when there was no government. The ancestors created the idea of reconciliation in order to settle murderous conflicts between families.

There is no one who dares to fight or do something bad in front of these respected families. If peo- ple are fighting and someone from the Sanganene family appears in the scene, all fighting stops immediately. Insults and bad behavior are never allowed in the presence of a Sanganena.

In number, the Sanganene are many. They live at different places within the Kunama ethnic group’s area. In Fode there is one San- ganena. And there are some San- ganene in areas such as Sona near the Gash River. There is a concen- tration of Sanganene families in villages such as Binbina, Shambiko and Bishuka.

If someone kills a person, the chief who lives in Binbina as- sumes the responsibility of a sur- rogate for the perpetrator. He sorts out the problems in the entire Ku- nama ethnic group, making him the chief Sanganena. The living Sanganena is called father Gaallee Ella. Except father Galee Ella, no one is allowed to perform any rec- onciliation activity. No one can perform the reconciliation even if they know the ritual. Only after his death can someone else inherit the title.

If there has been a murder, the killer takes refuge in either one of the Sanganene families. Hav- ing done that, he has to inform his immediate family. Following such an incident, his entire family and other relatives are in danger of fall- ing victim to an act of vengeance so the whole family and relatives have to take refuge at the nearest Sanganene family.

Once word is circulated, the San- ganene families organize a shelter for the killer’s extended family and provide round the clock protection against retaliation by the victim’s family. The next day, the main Sanganena calls for a meeting be- tween all the families involved in the feud.

The Sanganena formally informs the victim’s family that the alleged killer is under his protection and that it would undertake full investigation to determine whether the accused is guilty or not.

Once the investigation is conducted and any guilt is ascribed to a person, his or her family is ordered to provide compensation, which is usually in goods and live- stock. The family of the guilty party is allowed a certain period to put together a compensation package. In the meantime, the family of the victim must refrain from avenging their kinsperson.

While the family of the guilty side tries to put together the com- pensation package, they must regu- larly update the Sanganena with a progress report. In turn, the San- ganena reports to the victim’s fam- ily. All communication between the two parties is always conducted through the mediation of the Sanganena.

During the day of reconciliation between the two families, nobody is allowed to go to work. On that day, all the families meet at the place of the Sanganena. At midnight, they slaughter a goat and collect the blood in a Taffera a small gourd. A young and strong boy from the Sanganene family is selected to go to the hut of the guilty party’s fam- ily unnoticed and throw the gourd on the roof. This symbolizes the need for reconciliation.

The actual reconciliation itself is conducted in a wild and uninhab- ited area. The Sanganena supplies a fat ox. In the wild, they go near an anthill and cut the first leg of the ox with a sword while he is alive. After it is dead, half of it is eaten by the men present in the recon- ciliation process while half of it is taken back to the village.

Once they are all back in the village, a fully made up couple adorned in jewelry from each feud- ing family are presented to the rec- onciliation process. Each woman then proceeds to do the other one’s hair – both hairstyles have to match. Both men, dressed as if they were going to a wedding ceremony, also sit facing east.

The uncooked bone from the up- per arm of the ox, bared of all the meat and blood, is then placed in a hole on the ground along with a Teffera (gourd) filled with goat’s blood. Following that, the Sanganena spits on theTafferathree times and on the fourth go, hits the bone as hard as he can. When the bone is broken, he mixes the marrow with a concoction prepared ritually. He spreads the mixture on the two men from forehead to chest.

Both men are then instructed to touch forehead to forehead, nose to nose, and chest to chest and the ac- tion subsequently symbolizes the merging of the respective families. Once that process is completed, there is no fight or any thought of revenge instead, the two families become relatives. The philosophy behind Sanganene is that a killing does not get resolved by punishment but through unity.

The reconciliation process does not involve dancing and singing like other ceremonies and the Sanganena is not paid for his ser- vices. The process helps to prevent bloody fights between families from getting out of hand and con- sume whole communities.