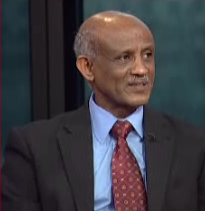 An Eritrean ambassador says UN-led sanctions on the country are a product of big nations and media institutions mainly driven by corporate interests.

Press TV has conducted an interview with Tesfa-Michael Gerahtu, Ambassador to the UK/Ireland, to further discuss the issue.

The following is a transcription of the interview.

Press TV: Eritrea has been in the news for a variety of reasons, certainly in the Western press because ‘you’re supporting terrorist movements, you’re supporting attacks on tourists’. Time, I guess, to give your version since we hardly hear about the Eritrean version of events in the mainstream media.

Gerahtu: There is pattern of behavior that has developed in the last 10, 11 years, and that’s whenever we want to do something or whenever there is a certain failure, take Eritrea as a victim, fabricate stories and blame anything and everything on Eritrea.

So, the recent allegations about Eritrea supporting the Afra Liberation Movement to do a tax on the tourist are really nonsense.

Number one, our track record in fighting terrorism is very clear. We fought against regional terrorism from 1991 up to 1997. And being a secular country, we are totally against extremism and terrorism.

And the second important thing is this is an internal situation, an internal condition. They have been fighting against the Ethiopian government for quite a long time.

And third is, in order to divert attention, Ethiopia has always been blaming, bombing and many other things that have been said before.

Press TV: Well, it’s Addis Ababa’s view that gets a hearing in the state department in Washington. But you have hosted a high delegation from Asmara here in London recently. It’s a bit strange, one would think, Britain a strong ally of the United States which is backing militants that are opposed to your country. How come Britain is seemingly keen to make some kind of ties with Eritrea?

Gerahtu: Well, in the first place, all these fabrication stories about Somalia are very much known to those who accuse us more than anybody else.

But to come back to the point that you mentioned, yes, there was a high-level delegation composed of the Minister of Foreign Affairs Osman Saleh and the Presidential advisor, Mr. Yemane Ghebreab, who visited the UK at the invitation of the FCO.

In the last three, four years we have been working very hard to see how we could raise our visibility and promote constructive engagement to the UK government.

Press TV: You see, a cynic might say this sudden interest is not so much due to you being able to address the balance about what you feel is unfair coverage of Eritrea and more to do with a lot of exciting business interests in Eritrea at the moment. I understand inward investment is on the increase?

Gerahtu: Generally, let’s be honest with you, in the last ten years the whole effort by different corners, and by raising the hostilities against Eritrea which is unwarranted, the whole idea was the Eritrean economy was to collapse in the next two, three years.

In 2010, in September, the ICG, the International Crisis Group, issued a similar report talking about the failure of the Eritrean economy, Eritrea moving towards a failed state and by 2010 the whole Eritrean economy is going to collapse.

But what we saw at the beginning of 2011 was a different orientation.

Press TV: How did they get it so wrong? You’re not seriously saying there are agents of US-backed Ethiopia in these institutions? These are supposed to be cold-hearted economists assessing the figures.

Gerahtu: To go into the cracks of the matter, as one of the investors in the mining sector in Eritrea said during the investment meeting that was organized by Mr. Henry Bellingham, “if you want to know Eritrea, you can never know Eritrea from your office, from the internet. You need to go and find [this order]…”

Press TV: That’s an advertisement for the Eritrean tourism industry.

Gerahtu: And I will add to that the perceived image created in the West especially in the ideological apparatus — in particular in the media institutions – it’s completely opposite to the real image justified in Eritrea. And that’s the problem with many quarters, they fail to understand Eritrea.

But most of the time for geopolitical reasons, for other interests especially economic interests, there is a deliberate move, a deliberate effort to tarnish the image of Eritrea.

This is a country, as I said before there is a different history, that now is a nation-building process that is based on sound experiences that focuses on owning our own decisions, promoting self-finance without resorting to aid, and creating of a national capacity that favors foreign direct investment.

Press TV: Well the geopolitics, I suppose in Africa itself is changing recently. I mean, we’ve got the fallout of the Libyan intervention, thousands of weapons and so forth; we’ve got threats of famine towards Marley and guns from the Libyan intervention. We’ve got all these different things happening, is there no prospect of any kind of talks with Ethiopia? Or if anything, is Ethiopia becoming more strident in its attacks on Eritrea?

Gerahtu: In the first place, Eritrea has a very clear position, history and proxies as far as regional peace, regional integration is concerned because we are people destined to live together, not for now only, tomorrow, the day after tomorrow and for generations to come. Our joint survival depends on the harmonization of our efforts complimenting each other.

But the question when it comes to Ethiopia is, Ethiopia has been the main reason for the instability of the whole of the African regime because there has been an inherent established thinking and practice based on the ideology of aggression in the politics of hegemony which has been seen in all the successive regimes in Ethiopia including the present one.

The border war and the present stance of the Ethiopian government not to withdraw, not to honor the international agreement made by the independent boundary commission in the higher court and its continued occupation of sovereign territories until now in open defiance to international law is a reflection of its ideology and politics.

Therefore, the only way that we could move forward towards peace security is for Ethiopia to show mutual respect and compliance with international law. And there are a lot of issues that we could discuss for our joint survival.

Press TV: Well, Washington and Brussels, though, keep pointing to human rights as the main reason for their interest in supporting Ethiopia, as it were. Did you detect any difference? Did the foreign ministry who was visiting the EU detect any differences, or the general assembly, about the sanctions regime? -Because there are sanctions on Eritrea.

Gerahtu: Well, as we said several times, the sanctions are unjust, illegal and irrational.

Press TV: So where did all the rumors come from?

Gerahtu: It’s a way of trying to intimidate and nail down Eritrea for various means.

I’ve written an article under the title, “How fake crisis are made and how a fake crisis was created to tarnish the image of Eritrea.” -And which Eritrea was accused of giving a submarine base to Iran, which doesn’t exist in this world. No such story exists in this world.

That was reproduced again and again by BBC, by CNN, and they tried to make it a big story. And even an MP raised it in the parliament that Eritrea has given a submarine base to Iran, this is a dangerous situation in the Red Sea basin because Israel also has a military base in one of the islands of Eritrea.

All these fake stories! You could count hundreds and hundreds of fake stories made against Eritrea, and everybody knows that they are not true.

When Ethiopia invaded Somalia at the end of 2006, they tried to create a myth about that invasion. The single thing that was fabricated was that Eritrea has sent 2,000 Special Forces to Somalia to assist the hedonist Islamic courts.

And there was a reason for that, to divert attention from the main issue of the invasion but, at the same time also, create a certain context: anybody who says Eritrea is there, Eritrea and Ethiopia are at odds, and therefore Eritrea is sending 2,000 troops.

So every person is forced to go to a conclusion which says Eritrea has started a proxy war in Somalia. Where are these 2,000 soldiers?

A fabrication after fabrication, lies after lies, to tarnish the image of Eritrea but, at the same time, to divert attention from the sense of the problems in the region.

Press TV: News stories like the one you mentioned can, of course, kick off unforeseen consequences. How prepared are the Eritrean government to respond to that? -Because a news story like that can presumably catch wild fire and lead to consequences on the ground, perhaps.

Gerahtu: Well, as I said, we are living in a dangerous time. One of the important dimensions that has to be looked at objectively and critically is how the ideological apparatus of these big nations functions in order to completely destroy the image of countries or groups or people or whatever.

And the media institutions are part of the ideological apparatus of the states that this stage of development is mainly driven by corporate interests.

Press TV: What is the state of business of Eritrea?

Gerahtu: By 2010, we achieved significant growth in the country. This has nothing to do with the booming mining sector now. Of course, we started to export gold in 2011 which we have to see its dividend in profits maybe in the near future. This is something home grown.

Press TV: Well, we’ll keep a close look on Eritrea on this show even if the mainstream media takes another kind of look on the country.