Right of reply to the Statement made by the Representative of Lithuania on behalf of EU, the Republic of Germany and Austria 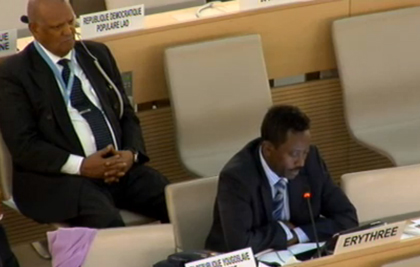 My delegation is deeply dismayed by the acrimonious statement made by the representative of Lithuania on behalf of the EU as well as Germany and Austria on their national capacities. The statement laments Eritrea’s non-cooperation with the Special Rapportuer to the country. This issue has been discussed with Ambassadors of the EU member states in Eritrea within the framework of the ongoing dialogue. As such, we fail to see the rationale of its invocation here.

On a more broader perspective, Eritrea objects in principle to the appointment of any country-specific mandate-holders as it believes that such course of action negates the role of the concerned state; defies impartiality, neutrality, objectivity; and, politicizes human rights issues. Eritrea’s objection to special mandate-holders is based on its firm belief and desire to avoid the politicization of human rights issues to the detriment of the noble cause of human rights that we deeply cherish. The approach has indeed proven to be confrontational and not different from the blaming and shaming pattern followed by the abandoned Human Rights Commission.

My delegation believes that this is also the principled position of many delegates and it was loudly spelt-out by those who took the floor before me. I will not pass without seizing this opportunity to remind the EU that this is becoming an important trend in all the regional and international blocks to which Eritrea belongs and hold the same belief on the appointment of special mandate holders to any country.

In the event, my delegation would like to reiterate Eritrea’s firm position that dialogue, constructive engagement and strengthening of the institutional linkages for the success of the UPR mechanism is central in addressing any fundamental human rights challenges. It is with this conviction that Eritrea remains engaged in a series of meetings on human rights issues with the EU member states representatives in Eritrea frequently.

Eritrea, therefore, once again calls upon the council in general and the EU in particular, to work for the rectification of the position followed against Eritrea so as to continue with the path of constructive engagement and dialogue.

I thank you Madame vice president.

Tags: Right of reply to the Statement made by the Representative of Lithuania on behalf of EUthe Republic of Germany and Austria