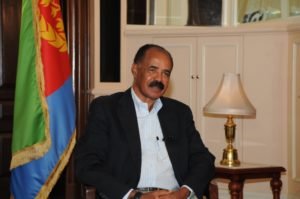 In an interview conducted with national media outlets on Saturday 3 November 2018, President Isaias Afwerki discussed the significance, progress, and regional ramifications of the recent historic peace agreement between Eritrea and Ethiopia and other related developments. Excerpts of the first part of the interview follow.

The border problem, the failure to implement the EEBC decision, should not be seen in isolation; outside the larger context.   The problem should be seen within the backdrop of unwarranted hostilities waged against Eritrea by the previous three successive US administrations in the past 27 years after Eritrea’s independence.  And this was also closely intertwined with US, post Cold-War, new global strategy

The Hanish dispute (with Yemen) did not occur, out of the blue, suddenly.  It was part and parcel of the larger scheme pursued by Washington, and the West in general, of working through regional proxies and surrogates to advance their agenda of the new world order.   The political approach in this configuration involved the propping up of pliable regional proxies while punishing and cornering those who did not toe the line.

Eritrea began to be perceived as a hindrance to the pursuit of US/Western regional strategy within the framework of this uni-polar world order.  The inevitable corollary of this perception were the formulation and pursuit of hostile policies against Eritrea; to corner and put the country under relentless pressure; to force it to succumb to these adversarial approaches.

Otherwise, if Yemen truly entertained good-faith claims on Hanish island, why didn’t it raise it  before with the powers who had colonized Eritrea? Why were claims to this island and issues of maritime boundary raised immediately after the assertion of Eritrea’s sovereignty and independence following a long political and armed struggle spanning for 50 years?

And what people may have failed to notice is the peculiarity and anomaly in the ruling of the Arbitral Court.  While the Hanish Island, which was part and parcel of Eritrea in all the previous colonial times, was awarded to Yemen,  the Court decided to give Eritrea fishing rights in Yemen’s territorial waters in that area.  This was done to keep the problem alive and entangle Eritrea in a continuous conflict.

The underlying reason of all these complications is transparent indeed.  Eritrea’s sovereignty was not palatable to those masterminding the new world order. Therefore, the Hanish conundrum was first concocted.  And after Hanish, the Badme case ensued.

If the Badme case was really a good-faith border dispute, then it could have been settled through bilateral engagement and various other means. In reality, good-faith border disputes would have been susceptible to prompt solutions as the borders in our region were established through formal or unambiguous, colonial treaties.  Our stance, from the outset, was in fact to resolve the dispute through bilateral means and in the event of failure, through international arbitration.

The US was involved as a facilitator in the early days of the dispute.  The US Secretary of State at the time, Madeline Albright, sent her envoys towards that end.  We were earnestly engaged in the process hoping for a prompt resolution of the case.  Apparently, an enduring solution was not desired on their part.  The dispute became more confounded; came under the purview of the OAU (in Ouagadougou) to later explode into a full-fledged and costly war that lasted for two years.

The Eritrea-Ethiopia border dispute was later referred to arbitration.  Again, the Arbitral Award was not implemented; not because it was rejected by the TPLF regime but primarily by those who were embroiled in compounding the conflict.  Because they wanted to use it as an instrument for keeping Eritrea “hostage”.   The new reality we see today is indeed a result of the political dynamics in Ethiopia in the past years and the resilience of the Eritrean people.

To revert to the prevalent trend, the Djibouti “border dispute” was conceived as another tool for harassing Eritrea.  Why were border issues provoked intermittently and given such prominence? We need to ask serious questions to probe the underlying motives and operational modalities in order to avert similar subterfuges in the future as we strive earnestly to cultivate positive bilateral and regional ties

Finally, in 2009, a decision was made to impose sanctions against Eritrea. This may be considered the ultimate attempt to victimize Eritrea after accusing it of supporting Al-Shabaab. This accusation was not based on fact and law.

But in similar fashion as the three border issues, the sanctions regime was concocted to force Eritrea into submission and to dominate the region.   The TPLF regime was hand-picked to serve as the pliable surrogate in our region to subjugate Eritrea.  We can see it as the vehicle that appeared in the third era – Eritrea was subjugated under for fifty years from 1941 until 1991 where various powers, the British, the US and the UUSR propped up Ethiopian colonial rule in Eritrea; after Eritrea won its independence through a long armed struggle for liberation.

The TPLF’s assigned role has however been increasingly weakening in the past years.  It survived literally under intensive care and subsidy in the past five to seven years.  This must also be juxtaposed with far-reaching changes in the global order.  We have to take stock of changes in Europe, the financial crisis in the last decade etc.  All these factors are interlinked.

Against this complex backdrop, the political dynamics inside Ethiopia for radical change ultimately became unstoppable.  Indeed, this is perhaps best epitomized by the resignation of former Prime Minister Hailemariam Desalegn.
In a nutshell, the recent developments in Ethiopia can be seen as bringing to an end the spiraling regional crises that beset our region in the post-Cold War period. The scheme to dominate the region through regional surrogates, which lasted almost 30 years, has ended with the coming to power of the new Ethiopian government.

The changes we are witnessing in Ethiopia and Eritrea today reflect the outcome of the two peoples’ resistance and resolve. We are now entering a new era, marking an end to decades of dominance and resistance that began at the end of World War II.

In 1991, there were prospects for peace and development for the peoplse of Eritrea, Ethiopia, and the region as a whole. But that was cut short by global and regional factors. The two peoples  have learned a lot from the lost opportunities – the Ethiopian government’s declaration of its acceptance and readiness to implement the Boundary Commission’s ruling, which heralds a new era, demonstrates this. The question now is about the potential of the new era and how we handle it.

These new developments must be gauged properly and all our efforts must be marshaled to bolster the conducive climate for its consolidation.  This is our first priority and primary responsibility.    We have a lot of major tasks that must be accomplished in different sectors in the future; in the times ahead. But, the utmost focus of the people and Government of Eritrea must be the consolidation of the peace process that has ushered in a new epoch. We are working vigorously to create mutual trust; an atmosphere of congenial mutual consultation.   Ultimately,  we need to gauge progress on the basis of concrete benchmarks and figures. We need to strengthen the basic pillars in order to secure future progress and development.

We cannot be complacent and presume that external challenges and conspiracies, both regional and international, have been vanquished; that they will no longer arise to undermine the new era of peace. Accordingly, our utmost priority is to strengthen mutual trust; to better align our respective programmes and perspectives.  The reservoir of political goodwill on both sides is huge indeed.  We must also take into account that there are internal subversive elements and unreconstructed remnants of the old order whose aim is to curtail progress of the new reality.  The mutual trust we have fostered has already enabled us to register rapid progress in many areas.

We should not harbor doubts and indulge in speculative analysis on the viability of the process underway.  Yes, there will be challenges but we have to confront them resolutely.   And as we work vigorously to consolidate the process, we must also keep in mind and lay the basis simultaneously for the larger objectives that we cherish and aspire for.

The challenges we face will be myriad indeed.  Various external forces are still bent on creating hindrances and driving a wedge between us.  We can see the ethnic strife stoked in several parts of Ethiopia.  Certainly, various fault lines and legacies of the past cannot be eliminated over-night.

We need to focus on the bigger picture of and enhance the complimentarity and synergy that we can tap to better address economic challenges faced by the two countries.  Our horizon cannot be limited to mere transaction of goods with the opening of the border.  We need to look beyond these single parameters to recoup lost opportunities and seize the new reality to boost shared economic vision between the two countries. This economic synergy, underpinned by security and political cooperation, can have a strong impact in the region. In this case, an ongoing exchange of ideas is opening new opportunities in the developments of the peace process. What we anticipated three months ago and the momentum we have witnessed on the ground is very promising. The steps we are taking in major sectors, particularly diplomatic, political, security, and economic sectors are very satisfactory.

In the Joint Declaration of Peace and Friendship, we have underlined the need to take our actions beyond bilateral reconciliation towards regional stability. Indeed, boosting bilateral relations will not be a success when critical matters in the rest of the region remain unsolved. We followed the same principle in 1991 and we still believe and are working together to establish regional stability for common benefit.

The situation in Somalia or South Sudan can have a direct or indirect impact on us. Therefore, we need to support positive engagement in those cases and we should not see them as different, in any way, from our bilateral relations.  If we look at the VAT  –  not in the sense of its fiscal meaning of value added tax but Value of Added Time –  in this process,  I would confidently say that the accomplishment made vis-à-vis the four months of the new epoch have been  incredible indeed. Still, we will not relax based on what we have accomplished so far. In fact, we will increase the pace and further strengthen our efforts.

I can say that we have gone beyond what was outlined in the Declaration. Of course, the Declaration includes points anchored on the general vision of the two countries, but in reality, a lot more has been done in a very short time.