7th Congress of the
National Confederation of Eritrean Workers (NCEW)

Distinguished Participants of this Congress, 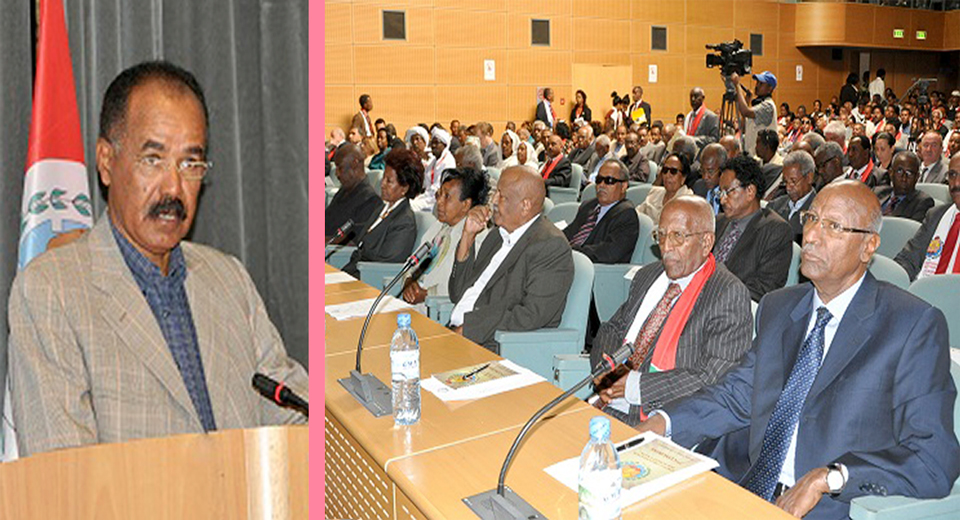 Allow me first to express, at this auspicious moment, my warmest congratulations to all members of the National Confederation of Eritrean Workers (NCEW).

This Congress is taking place, if only by happenstance, at a time when Eritrea has just celebrated the 25th anniversary of its (post-independence) nation building journey.  As such, and even as we pay tribute to the long and proud history of struggle of Eritrean workers, it is imperative and timely to ask what the NCEW has achieved in this past quarter of a century.  Where does the NCEW want to go and how will it proceed in the years ahead?

These questions are not pertinent to the National Confederation of Eritrean Workers only.  They are equally relevant to various government bodies, social associations, corporations and different enterprises.  And beyond national entities, the subject matter is also relevant to our close and distant external partners.  In the event, these issues will require objective and profound assessment.

The vision and strategy of nation building that we have tenaciously pursued in the past quarter century include:
1.    Ensuring sustainable improvements in the quality of life of our citizens, and, the maintenance and preservation of this task as a central goal or objective;
2.    Increasing productivity and output for genuine economic growth and prosperity;
3.    Building extensive infrastructure, with even and fair spatial distribution, in all sectors (roads, ports, airports, water systems, electricity, transport, health and education, manufacturing, services… etc.) so as  to pave the ground and stimulate overall productivity and economic growth;
4.    The creation of extensive employment opportunities in all sectors, industries and enterprises in accordance with their respective potential and comparative advantages;
5.    To build efficient/effective and clean institutions in phases;
6.    Above all, to cultivate, organize and enhance a professional, experienced and highly disciplined labour force in all sectors, industries and enterprises.

How many of the visions, strategies and plans spelled out above have we achieved in the past quarter century against the backdrop of a devastated, literally below zero, economic reality that we inherited and that was further compounded by limited, underdeveloped and unexploited domestic endowments, as well as the relentless national security and economic hostilities and subversions that were employed against us through different forms and facades.  These intertwined phenomena will require sober and objective appraisal that is not tainted by emotional or presumptuous approaches.

Our domestic reality and its checkered trajectory cannot of course be seen in isolation.  It is indeed influenced by global and regional realities and developments.  Our approach has consequently remained comprehensive and holistic.

The spiraling turmoil, devastation, and economic suffering that is afflicting various parts of the world today, and especially our region, is too palpable to merit further elaboration.  These crises are inextricably linked with acts of those who claim or believed that their camp “has triumphed” after the end of the Cold War and who thereby aspired to create a uni-polar world.

Indeed, periodic and appalling statistical explanations that accentuate prevailing acute economic polarizations in society: commonly described as the 1% against the 99% – (in reality, the ratio is 0.001% vs 99.999%); statistical data circulated by Oxfam recently that amplifies “the wealth of a handful billionaires amid the impoverishment of  billions of people”;  or, other anecdotal instances such as the fact that  “the wealth of the four richest people in Indonesia is equivalent to the aggregate income of 100 million citizens in the country” all corroborate the imperative for profound and serious appraisal of global realities.

Demonization of all arguments and concepts that challenge the validity/ideology of the prevailing global order; weakening and vilification of workers’ movements and other forces that seek social justice; exaltation of speculative practices of international banks;  shrinking of the middle class even in the industrialized nations (known as the 1st World); increased marginalization of countries (mostly found in Africa) that are in the early stages of economic development resulting in their confinement to the production of raw materials and their attendant deprivation from developing their infrastructure, industries and modern services;  ensuring that these countries are governed by corrupt and pliable regimes that serve “external” agendas,… etc.,  are some of the tools routinely invoked to secure the pre-eminence of the uni-polar international system.  Other more perplexing practices include inducement of debilitating brain drain and migration of the professional and educated segments in these countries, while manual labourers without the requisite expertise are not spared and exposed to “modern slavery”.

In a nutshell, the scheme involves the unfair exploitation of resources, the denial of jobs and job opportunities to augment the number of destitute populations who survive on charities.  The climax of this “film” or “operation” is shedding crocodile tears of “benign concern”.  These are some of the sad hallmarks of global realities in the past quarter century.  These trends warrant a more profound and objective appraisal that is corroborated by quantitative data more and beyond the succinct and general description that I have tried to outline.

Our ongoing endeavours to chart out our future developmental path – and the associated questions of: from where we have started? Where we are now? Where we want to be? And how we want to reach there? – are naturally predicated on detailed and comprehensive evaluation of the domestic and global realities and trends that I have described above.

Perhaps we cannot expect the current Congress of the NCEW to examine all these issues exhaustively to come up with comprehensive answers.  Nonetheless, I hope and trust that the Congress will map out a road map for enhancing its role in future programmes geared towards the achievement of our domestic priorities; especially in regard to the augmentation of job opportunities, work ethic and labour productivity in all sectors, industries and enterprises as well as in the cultivation and consolidation of external ties and solidarity for sharing experiences.  Let me conclude by wishing you success in all your proceedings.