Over 2000 Swedish-Eritreans demonstrate for their rights in Stockholm

Over 2000 Swedish-Eritreans braved the cold to demonstrate for their rights in Sweden. The demonstration called by the Eritrean communities and the three Swedish-Eritrean associations affected by the recent arson of their community centers.

The march that started from Humlegården in central Stockholm and ended at the Swedish Parliament, reminded the Swedish MPs and politicians that, the rule of law should also apply to the Swedes with roots in Eritrea. They demanded constitutional rights of association and rights to be respected! They demanded an end to the harassment of Swedish-Eritreans in Sweden. Especially by the Swedish media!

The total silence of the municipal and parliamentary politicians is causing concern among many of our members says a representative of the affected Associations, Senai Haile. The children who daily use the burned premises for their activities are astonished that no politician has stepped forward and condemned the arson. Many more express great disappointment at the lack of condemnation in the Swedish media. 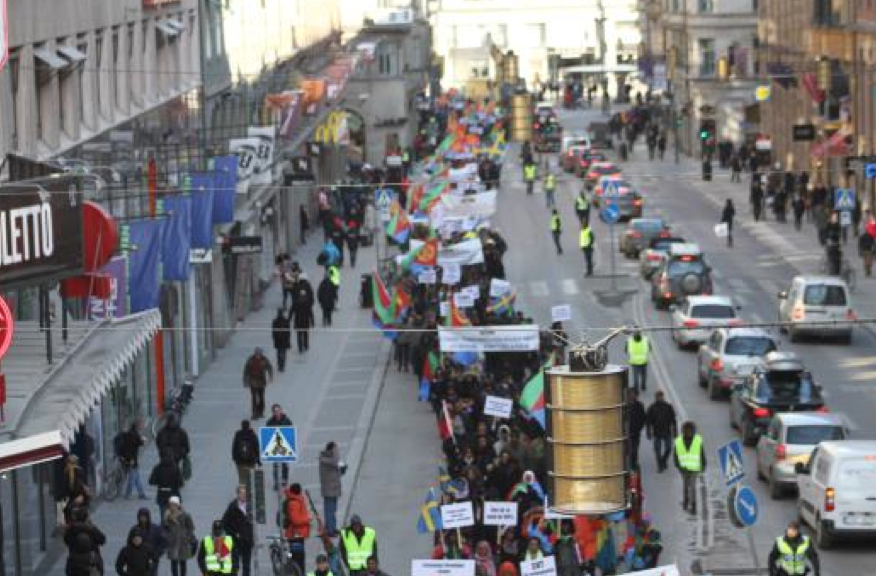 The demonstrators were also critical of the Swedish news coverage of the tragic incident. Instead of condemning the arsonists, the Swedish media in an irresponsible way spread misleading and biased news. Among others, the Social Democratic MP, Arhe Hamednaca freely ravaged his heinous and irresponsible statements instigating that those who use the community centers would have set fire to their own premises. To portray he victims as scapegoats is unacceptable and should be condemned. Balanced news coverage should have heard what the victims have to say.

Eritrean National Association would like to thank, all those who had traveled all the way from Umeå, Gothenburg, Örebro, Uppsala, Skara/Linköping, Malmö-Lund, Jonköping, Linköping , and many other places outside Stockholm, to demand their rights before the Swedish Parliament. We also want to direct our thanks to all organizations outside Sweden who sent their solidarity messages.

Tags: Over 2000 Swedish-Eritreans demonstrate for their rights in Stockholm