Norway’s Ministry of Justice satisfied with his trip to Eritrea 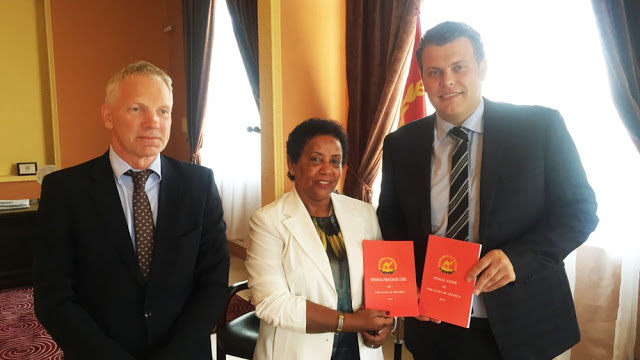 During the visit, the Kallemyr see a copy of the new Criminal Procedure as the country has long worked with. Here he is with Norwegian ambassador to Sudan Morten Aasland and Eritrea Attorney Fozi Hazim. PHOTO: PRIVATE

State Secretary in the Ministry of Justice Jøran Kallemyr returned to Norway on Saturday. NRK reports, the Secretary was very satisfied with his trip to Eritrea.

Ministry of Justice has long worked to bring about a return agreement with Eritrea. Eritreans are by far the largest refugee group who have been granted asylum in Norway in recent years.

“We went to Eritrea to obtain confirmation that they intend to comply with the maximum limit of 18 months of national service, and ensure access for observers from Norway so that you get to see the changes then actually implemented, and to assess the state of the country,” says Kallemyr.

As Eritrean authorities now promise that the country’s national service will be down to 18 months, according to the Norwegian government that stays basis for asylum seekers may be remitted.

Very satisfied with the trip

During the visit, the Kallemyr see a copy of the new Criminal Procedure as the country has long worked with. He has not yet considered the content of the law, but believes it will be extremely important when it comes to human rights issues, such as how many hours to elapse before being prepared for incarceration.

“We are very positive on the new law, then the question is, of course, how it can be implemented to ensure a fair trial and an open process around proceedings,” says Joran Kallemyr.

“The immigration authorities must have a good knowledge of conditions in the country before we can return people. The foundation is not good enough today. We have not been enough inside Eritrea that we know the facts,” he continued.

According to the State Secretary, Norwegian authorities have now been given the green light to send experts and observers who can assess the situation in the country.

Kallemyr said he got a far better impression of the country than he had expected.

Jøran Kallemyr strolling on the streets of Asmara“My impression is far better than I had thought. Now we were, admittedly, only in the capital Asmara, but there we walked around freely at night, put on regular restaurant, it was full of life in the streets, the TV in the bar showed BBC World and there were internet cafes with access to Facebook,” says Kallemyr .

He thinks it is wrong to compare Eritrea with North Korea.

There are major challenges in terms of human rights in Eritrea, but the question we need to get answered is whether it is right that everyone who comes from Eritrea for political asylum in Norway.

“We politicians should not consider land situation in Eritrea – the important thing is that we have secured professionals access. So we have to examine how the situation really is before we consider asylum foundation,” concludes Kallemyr.

Tags: Norway's Ministry of Justice satisfied with his trip to Eritrea