Eritrea shares abundant coastal natural attractions. It possesses an escarpment with spectacular views from the highland plateau to the coastal plains. It is also a country endowed with around 2,234 kilometers coastline that entertains a varied unique natural features including “three seasons in two hours, and a place with the lowest point on land: Denakil Depression. Along the Eritrean coast, temperatures average is from 27°C to 30°C in the daytime; whereas in the Danakil Depression in the southeast, temperatures may reach 60°C. Hence, what makes a potential destination for tourists to this region is not only the above mentioned unique features but also the magnificent scenery and hot springs, and rich natural habitat of bird life, wildlife, and marine life .

For this reason, part of the coast, the Semenawi Bahri (Filfil), a few kilometres from Asmara, is protected area for the county’s national park for it is a region with numerous species of flora and fauna. Studies have proved that the region is rich in wildlife such as ground hornbill family bird life that includes francolins, sunbird, shrikes, canaries, turacou, serins, starling, green pigeon, oriole, barbet, robin baboon and babblers. Moreover here and there in the cloudy vegetation of Solomuna area, various love-birds, wood dove, coucal, warblers, perinea, cisticola, woodpeckers, cameroptera, crombeck, varieties of parrots, warblers, tit and hornbill are chanting and dancing together with nature. Additionally, Abyssinian rollers, scimitarbill, flocks of starling, buffalo weavers, varieties of grouse and wagtail in the scrubland and Red Sea coast; stork, herons, crab plovers, larks, sparrow hawk, little green bee-eaters, golden sparrow, speckle-fronted weavers, chatterers and kingfisher in Massawa and environs; francolin, massive thick- billed raven, varieties of pigeon, hornbill, wheatears, turtle dove, wagtail and seed-eaters are dancing along the serene clouds and tranquil vegetation all along the way from Massawa to Asmara. 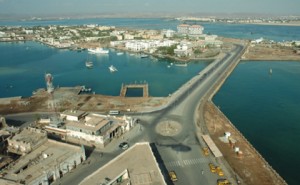 This is not to mention the enumerable wildlife that are enjoying the country’s coastlines with peace and security. Wildlife such as the greater kudu and Tora hartebeest, monkeys, olive baboon, pale or sand fox, common jackal, black-backed jackal, bat-eared fox, genet, African wild cat are some from among the most dominant ones. And in place like that of Buri Peninsula & the Ghelalo- Tio-Badda Triangle wildlife that includes warthog, soemmering’s gazelle, Abyssinian hare and ground squirrel, baboons, dik-dik, dorcas gazelle, wild ass, ostrich and other small mammals are in abundance. Moverover, leopard, bush buck, klipspringer, duiker and warthog are in plenty around the Green Belt of the country, Semenawi & Debubawi Bahri. Whereas places like Dissei Island are known for Gazelle and Dahlak Kebir for Oryx, dugong and green turtles. Not only are this but the Eritrean coastlines and eastern escarpments also unique for a marine life with healthy coral reefs around 350 islands of the Red Sea coast including the Dahlak Archipelago. It is special for a flat reef gardens and cliffs that slope down to the depths of the ocean floor. According to studies, this place is identified for large mounds of brain coral (Porites), and branching Acropora. It also harbors diverse of fish species including angelfish  blue and yellow Arabian, the yellow bar and the striped emperor, butterfly fish, the endemic banner fish with its elongated dorsal fin and blue-striped and other colourful varieties. Moreover, according to researches, the place is a heaven for parrotfish, groupers, damselfish, animonefish, dascyllus, scissortail sergeant, blue and orange sunrise dotty back, small pipefish, red squirrelfish and cubelike box fish and larger fish jacks, snappers, emperors, sweetlips and barracudas. What make it more unique to this place is that it is rich in a variety of crabs, black, white or red sea cucumbers, snails, and jellyfish. Hence, tourists are most attracted to the sandy beach of the Red Sea taking the pleasure in the wide sandy beaches and calm sea waves along the Red Sea coast; these are the safe heavens to nature-loving tourist. The Gurgusum, Buri Peninsula, Zula  Bay, Mersa Gulbub, Mersa Ibrahim and Ras  Kuba. Dahlak Archipelago with over 350  islands, Dissei Island and Assab Bay islands  entertain tourists with white sandy beaches  and ample opportunities for underwater  exploration. To the adventure tourists, there lies one  of the majestic volcanoes around Dubbi of  Eritrea which was created by the violent  underground activity of the African Plate  (Nubian) to the west and the Eurasian,  Arabian, Indian, and Somali Plates to the  east.

These volcanoes along with other large number of volcanoes lie along the Great Rift  Valley. One may also cruise down the southeastern  portion of the coastal plain and enjoy the Denakil Depression, the lowest and hottest  place on planet, which is also part of The  Great Rift Valley. Again this depression  is the site of what is known as the Alid  volcano. Hence, apart from tourist attraction,  researchers have assessed that the area of this  volcano is a potential for possible geothermal  resources, which may be used in the future to  produce electrical energy for the country. More importantly, however, the Denakil  depression of Eritrea is most attractive to  tourists for it is part of the Great Rift Valley,  the massive fault system that stretches over  6,400 kilometers from the Jordan Valley  in Israel to Mozambique passes through  Eritrea. Besides, Eritrea is gifted with natural hot  springs in many locations such as Akwaar,  Mai Wui, Gahtelai and Arafayle. In addition  to that, tourists are welcome to enjoy the  country’s underwater paradise. With the help  of the Eritrean Tourism Service Association,  international divers may appreciate the  colorful underwater life in Eritrea. Snorkeling  and scuba diving in some of the Dahlak  Archipelago environs including: Desie,  Nakura, Kundbulu, Dahlak, Durgam, and  Durgela are once a life time memory. The underwater adventurers in particular  are most welcome to get pleasure from the  Eritrean Red Sea waters for they possess  the largest number of ancient and wartime  wreck ships. There exist loads of wreck  ships ruined during the Second World War.  There also exists a bulk of Ethiopian wreck  ships destroyed by the Eritrean People’s  Liberation Front during the armed struggle  for independence. Hence, the historical ships in the Eritrean  Red Sea are “a dream come true” to the  international tourists who may want to  dive in search of wreck ship. Studies have  discovered that the Dahlak Kebir Island  in the Gubbet Musnefit area harbors some  Italian wreck ships of WWII. Some of them include: Nazario Sauro, Urania, promoeteo, Giuseppe Mazzini, Bottego …etc. Likewise, as mentioned above, as the Eritrean Red Sea possesses natural sandy  beaches, swimming, fishing, and other water  sports are common on the offshore waters.  Not only this, but also the Eritrean Red sea  is attractive for it possesses more than 350  islands out of which the Dahlak archipelago  ranks the biggest archipelago comprising  some 210 islands. Hence, Eritrea serves a  cruise tourism supported by yacht stopovers,  small ship cruises in the Eritrean Red Sea for  the islands lovers