The National Union of Eritrean Women (NUEW) Celebrated, under the theme,: A Skilled Girlforce. 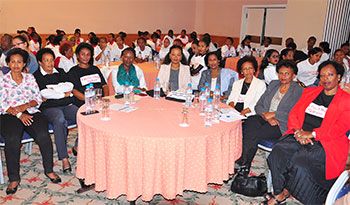 The National Union of Eritrean Women (NUEW) and other Government partners celebrated the International Day of the Girl on 11 October, under the theme, With Her: A Skilled Girlforce.

In a hall packed to capacity at the Asmara Palace, the event featured riveting testimonies from girls and women who battled all odds to complete their education and inspired other girls to make positive changes in their lives. There was also a presentation on the findings from the recent research initiative, Formative Research and the National Strategic Plan to End Underage Marriage in Eritrea.

The event was supported by UNICEF Eritrea, and was preceded by a march in the morning by schoolchildren from the Red Sea and Barka High School, who carried banners that promoted the theme for the day.

“NUEW has helped to improve the capacity and competence of Eritrean women and girls since its inception during the struggle for independence, and it has encouraged women to take part in nation-building since independence,” said Ms. Tesfamicael.

She mentioned that one of the core goals of the NUEW is to improve the status of Eritrean women by raising their political, economic, and social status.

The theme for this year’s event, With Her: A Skilled Girlforce, is set against the backdrop that 1 billion young people including 600 million adolescent girls globally  will enter the workforce in the next decade. More than 90 percent of these young people who are living in developing countries will work within the informal sector, where low pay and exploitation are common.

In many developing countries, girls face multiple forms of gender discrimination. Early marriage of girls is also a factor whereby girls are denied the right to complete their education, and to learn life-skills and the ability to gain meaningful employment to become self-sufficient. This, in turn, keeps women tied to low-skilled work with very little pay and traps them in an intergenerational cycle of poverty.

“Today we commit to break the barriers girls face, including harmful social practices, that impede their education, knowledge, and their ability to become a meaningful part of the new skilled workforce,” said Ms. Shaya Ibrahim Asindua, UNICEF Deputy Representative.

In her speech, Ms. Asindua also congratulated the National Steering Committee from the Ministry of Health, the Ministry of Labour and Social Welfare, and the NUEW, who worked steadfastly to bring this important study to light, which will help to end underage marriage in Eritrea.

This was followed by a detailed presentation by Dr. Ghidei Gebreyohannes, from the Asmara College of Health Sciences, on factors contributing to underage marriage in Eritrea. Additionally, the Fiorina Cultural Group entertained the assembly with lively dance routines, as well as a drama that drove home the message about the benefits of getting girls married only after they complete their education and attain maturity.

The crowd was inspired by powerful testimonies, particularly of 19-year-old Fatuma Ali from the Afar community in the Southern Red Sea region, who resisted marriage when she was 16. “I was the only girl from my community to complete lower secondary and to transit to secondary school. My parents were told that I should get married and that there was no need for a girl to gain so much education,” said Fatuma, who was determined to complete her education.

She convinced her parents and gained the support of her father, and today Fatuma is in college and a role model for many. Though it was her first public appearance, Fatuma wants to reach out to communities to talk about the benefits of resisting early marriage and to promote the importance of girls’ education.

The second testimony was by Mihret Berhaki, who was married at 15. Even after having children early, she convinced her husband to support her education. She went on to complete her college degree. Today she works for the Ministry of Information and is expecting her third child.

The third testimony was by Hanna Kahsay Embaye, an accomplished writer and filmmaker. Born in the Gash Barka region, she travelled to Asmara to gain a college degree and to follow her dreams.

“I struggled a lot in the beginning and worked at many low paying jobs washing dishes and clothes for many families. But I never gave up on my dreams to become a writer and a filmmaker,” said Ms. Embaye to cheers of approval from the assembly. Today she is an accomplished professional with three children, as well as a positive role model for young girls and women in Eritrea.

Educating girls is even more imperative when considering that today’s generation of girls is preparing to enter a world of work that is fast being transformed by innovation and automation. Educated and skilled workers are in great demand, but roughly a quarter of young people  most of them female – are currently neither employed nor in education or training.

For girls to acquire the skills and training necessary to secure decent work in the future, there is a need to ensure the following three important goals: Children and girls are in school so they access learning opportunities and progress to secondary school. Girls gain key life skills, such as self-confidence, problem solving, and critical thinking, which are crucial to succeed in this rapidly changing world.

Girls transition from  school to work by getting adequate access to career guidance, female mentors and other relevant training. The commemoration was also an opportunity to accelerate efforts towards Sustainable Development Goal (SDG)   8, which aims to “increase the number of youth and adults who have relevant skills, including technical and vocational skills, for employment, decent jobs and entrepreneurship”. Work towards SDG  8 will contribute to ensuring all girls and women, including those with disabilities, have equal rights, education, and opportunities as called for in SDGs 4 and 5.

The International Day of the Girl, celebrated globally since 2012, is the culmination of youth advocacy around the world, which led the United Nations to declare October 11 as the International Day of the Girl Child. Its mission is “to help galvanize worldwide enthusiasm for goals to better girls’ lives, providing an opportunity for them to show leadership and reach their full potential.”

It is a day when all organisations working for the rights of women and girls around the world come together under the same goal to highlight, discuss, and act to advance rights and opportunities for girls everywhere. This is the second time that International Day of the Girl is being celebrated in Eritrea, and the seventh time globally.

The concluding message for the day was that we should all stand with our girls – the future leaders, entrepreneurs, teachers, scientists and software engineers – to develop their skills and remove other gender barriers that they face, so that every girl can join A Skilled GirlForce.