Stop Harassing Eritrean People and Official Representatives in the Netherlands 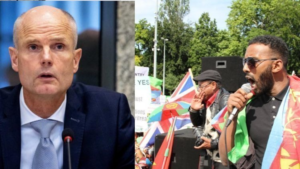 Dear Minister of Foreign Affairs, Stef Blok,
We, the undersigned Eritreans residing in the Netherlands and all over the world, write this petition to object to the false and defamatory smear campaign; which has been waged on our fundraising effort to help Eritrea counter the outbreak of coronavirus (COVID-19) and protect our people.
After the false report by Argos radio program that alleged the Eritrean embassy in The Hague, “uses coercion to raise money among Eritreans in the Netherlands”, you demanded clarification from the Eritrean Embassy. You also made a threat for further actions without any fact-checking of the report.
1. We are deeply saddened that your high office is being used to assist the smear campaign against Eritrea, whose sole purpose is to create a diplomatic rift between Eritrea and the Netherlands.

2. We would like to make it clear to you that the information that was used to pressure your government into making hasty decisions, is completely false and fabricated. The fundraising project was initiated by many Eritrean people around the world, and organised by the wider participation of a coalition of the Eritrean civic organisations including women, youth and communities.

3. We would also like to make it clear to you that we do not need to be coerced to help our people back home from the dangerous virus that has caused large scale loss of life and severe human suffering in the world. The irony is the very groups, who are now actively campaigning to smear the historic noble cause, were shaken by the rapid and very generous response of Eritrean people across the world at the time. For instance Eritrean Americans contributed over 4 million dollars in a matter of a few days.

4. The purpose of the fundraising was to support the effort of the Eritrean government containing the coronavirus outbreak and protecting its own people.

5. We are very proud that our Eritrean government and our people back home have been very successful in containing the coronavirus and taking collective responsibility to look after the mass people in Eritrea. As of October 29, 2020, 461 returnees were diagnosed with the coronavirus in Eritrea and so far not a single death has occurred, out of the 461 infected 405 have already recovered fully and have been reunited with their families and loved ones.

6. Our Eritrean government took fast action before the first case of the virus arrived in the country. While it was spreading from China to many parts of the world, part of the action taken included shutting down international travel, training the healthcare professionals and purchasing supplies of coronavirus test kits and making the country’s own PPE and sanitizer.

7. Further expansion of Eritrea’s infrastructure and laboratory capacity has enabled the mass testing that has been carried out throughout the country. Our government has also established 47 quarantine centres for thousands of Eritrean returnees who have returned home illegally (as travel ban is currently in place) by land and sea from Ethiopia, Djibouti, Sudan and Yemen.

8. The Eritrean government and the people of Eritrea inside and outside the country have been engaged in minimising the impact of the lockdown measures on conditions by helping the most vulnerable and economically affected. The efforts include providing cash, food and essential supplies. The Eritrean people across the world have supported their families, friends and their people back home. Landlords and landladies have suspended rent for tenants.

9. Therefore, in light of the above facts, your government should be supporting these efforts, and certainly not harassing our people and Eritrean official representatives. Of course, these harassment from your government, your media organisations, and the group led by Professor, Mirjam van Reisen, are not new. It is still fresh in our memory, when the Mayor of Veldhoven banned the Eritrean youth conference in 2017. The Mayor took a very aggressive and hostile action on the 650 Eritrean youth participants of the conference, who were thrown out from the city  leaving them in harm’s way and great difficulties. A year later, the Court of East Brabant ruled the Mayor of Veldhoven Jack Mikkers was wrong to ban the conference. It should also be pointed out that your government was opposing the lifting of the UN sanctions on Eritrea, which contributed to the sufferings of Eritrean people greatly. While the Sponsors of the sanctions including, the US were in favour of lifting the sanction, your government opposed the move vehemently until the last-minute.

10. The motive behind your hostile policy towards Eritrea is not clear. Is your government leading the harassment of Eritrean people and the official representatives in the Netherlands? Or has your government caved in to pressures from the anti Eritrea group that is led by Professor, Mirjam van Reisen.

11. The Netherlands-based group that claims to stand for the human rights of Eritrean people is part of the wider groups that are based in London and Sweden. These groups are “regime change” campaigners that were at the forefront of implementing the Western policy to overthrow the Eritrean government for over two decades. The human rights of the Eritrean people is not the concern of these groups. In fact, all their activities, including their campaign to impose sanction on Eritrea was to produce a humanitarian crisis in Eritrea; which could serve as pretext for foreign
intervention. Having been swept away by the massive changes that followed the end of the twenty seven-year rule of the TPLF regime in Ethiopia, and the peace agreement
between Eritrea and Ethiopia, these groups are now trying to regroup.

12. This is the same group that is led by Professor, Mirjam van Reisen. It is now employing the same trick that it used with the 2% story a few years ago. A story that supports their accusation set up in advance, in this case they get individuals who claim: “they had been pressured, including with the threat that the family in Eritrea would not receive food coupons if they did not pay”. Then they get their friends at the media organisations to produce and publish the story. Of course, the Eritrean people at large know these stories are false and fabricated and cheap. However, as you can understand, we are furious that our efforts to help our country in this challenging time are being used for a cheap political score.

13. Let it be clear that Eritrea is a country with a small population and unique history, which has been sentenced to death by the most powerful entities in the world. No stone was left unturned for the collapse of the country for over two decades. In fact, Eritrea was written off as a country that would inevitably collapse by these groups and their backers. The enormous challenges including military invasions, sanctions, political and economic pressures, have affected Eritrean people greatly. With the emerging peace, Eritrea is focusing its effort and resources towards rehabilitation processes, improving the living standards of its people and building a strong and viable political and economic system.

14. In conclusion, We, the undersigned Eritreans, would like to make it clear to your government that we donated our money happily and in a sense of urgency. We are also very proud with the result of our government and the achievement of the people in controlling the outbreak of coronavirus (COVID-19) and minimising its impact on the most vulnerable. We demand your government to stop harassing our people and official representatives in the Netherlands. We demand a formal apology for these wrong doings. We would also like to politely ask that your government reviews its hostile policy towards Eritrea; which is increasingly looking as though it has been hijacked by the anti Eritrea groups. They claim to stand for the human rights of Eritrean people, but their actions over the long years have been to create a humanitarian crisis in Eritrea with the purpose of the failed regime change agenda.

We await your reply with great interest and urgency.
With gratitude