Statement During the Security Council Debate on: “Maintenance of international peace and security: Upholding the UN Charter” 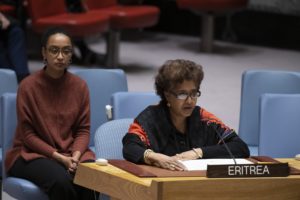 Statement by Ms. Sophia Tesfamariam, Ambassador and Permanent Representative of Eritrea to the United Nations, during the Security Council Debate on: “Maintenance of international peace and security: Upholding the UN Charter”

My delegation wishes to congratulate Vietnam for assuming the presidency of the Council for the month of January and for convening this timely debate on “Maintenance of international peace and security: upholding the UN Chaffer”. I would like to take this opportunity to welcome I-I.E. Mr. Pham Binh Minh, Deputy Prime Minister and Minister for Foreign Affairs of Viet Nam and thank Secretary-General António Guterres and Mrs. Robinson for their statements.

The United Nations came about primarily to maintain and check international peace and security after the devastation, destruction and dire humanitarian conditions caused by World War Il. Established in 1945, its creation was a deliberate attempt “to save succeeding generations from the scourge of war”. The UN Charter was the means to do that. The Charter gave the Security Council the primary responsibility for the maintenance of international peace and security and provided the procedures to handle international disputes and prevent their escalation.

The Charter and organizations of the United Nations are necessary for the arbitration of relations between states, the protection of common principles and the promotion of common values and material well-being. The Charter has been described as the world’s central operating system—”the motherboard of global governance”, which bore ideas such as the Millennium Development Goals (MDGs) and today, the Sustainable Development Goals, which have been embraced globally.

At present time, generations around the world are living in conditions of poverty and peacelessness, where human development, dignity and security remain elusive.

Despite the fact that Article 2 of the UN Chaffer’s call on countries to, “refrain in their international relations from the threat or use of force against the territorial integrity or political independence of any state”, today, there are wars waged in total disregard for the Chaffer of the United Nations and its principles, and the sovereign rights of States enshrined in the Charter are willfully ignored.

Our world has witnessed and continues to witness massive atrocities, mass destruction and slaughter. We have failed to “save succeeding generations from the scourge of war” and the Council’s efficacy is being questioned by suffering people  everywhere. The Security Council has been ineffective and inconsistent in securing peace in our world. In some instances, its actions have contributed to untenable situations, prolonging the suffering of millions in the process.

Many populations around the world are grappling with intractable conflicts beyond their capacities, and the Security Council remains impotent, constrained by geopolitical considerations, double standards, and conflicting interests.

And when it did act, the Council’s actions tend to revolve around managing crises, rather than ending them.

The Security Council’s credibility, integrity and efficacy have been undermined and there are many contributing factors. For brevity’s sake, Eritrea wishes to highlight three of them:

l. Strict observance of the principles of the UN Charter. Eritrea reiterates the importance and validity of collective security by fully adhering to the UN Charter in order to deter war and advance peace. One of the pillars of the UN Charter is for nations to live by their commitments. Treaty commitments aye sacrosanct. States should not be allowed to cherry-pick and the Security Council should also be duty bound to enforce peace accords.

2.    Invocation of Chapter VII. Chapter VLI should be applied only when the situation warrants it. However, at times, the Security Council has acted ultra vires, leading to the imposition of unjust and illegal sanctions on States. The Council has broadly construed its powers under Chapter VIl and expanded its jurisdiction from traditional matters of security to new spheres previously under the purview of other organs and non-U.N. entities.

The Council has also over time “assumed quasi-legislative and quasi-judicial functions, straining conceptions of propriety and institutional competence”. “Discordant Council practice has resulted in a blurring of the lines between the ordinary powers and functions allotted to the Council and those extraordinary powers reserved for situations constituting, at a minimum, threats to     international peace and security”. Hence the need for transparent rules and procedures in invoking both Chapters VI & VIL

3.    Council Agenda item. There is a tendency towards entrenchment of situations in which Chapter VIl has been invoked. Though the Council has explicitly “concluded its consideration” of an item and removed it from the list of matters of which the Council is seized in, it has done so less frequently and in some instances, matters have remained on the Council’s agenda for extended periods. This leads to lack of clarity in assessing both the purpose and endpoint of Council responses to threats to the peace, and allows for the routinization of exception. Clarity and consistency are similarly essential in resolutions pertaining to mandate evolution and termination. Otherwise, overriding political considerations could lead to selective and inappropriate application of the rules.

Adherence to its mandate under the UN Charter will enhance the Council’s credibility, efficacy, integrity and reputation, as well as confidence of member states in its decisions.

In 2020, in addition to the 75th Anniversary of the United Nations, the global community will mark the twenty-fifth anniversary of the Fourth World Conference on Women and the adoption of the Beijing Declaration and Platform for Action (1995). As we enter the “Decade of Action” in pursuit of the Global Goals, and Africa’s Agenda 2063 and “Silencing the guns by 2020”, it will require a renewed and concerted effort by all of us, towards the full achievement of peace, security and development.

The Council can count on Eritrea’s continued support.

Tags: Statement During the Security Council Debate on: "Maintenance of international peace and security: Upholding the UN Charter"