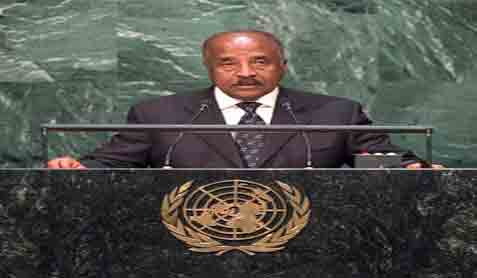 Minister of Foreign Affairs of the State of Eritrea at
The Seventieth Session of the United Nations General Assembly
03 October 2015, New York

Seventy years after the birth of the United Nations with its promise of peace, justice and development for all, of all nations acting in concert for the common good, it is undeniable that we continue to live in an unfair and unequal world, a world where conflicts and wars rage, extreme poverty persists in the midst of plenty, children die from easily preventable diseases and justice is routinely trampled.

The United Nations Organisation itself is a reflection of this unfair, unequal and undemocratic global order. In the UN, the overwhelming majority of member states are marginalized, this assembly of nations which should be the most powerful organ is bereft of real power and influence and power and decision making are dominated by a few among the few. Two decades of talk to reform the organization has yielded zero results. The resistance of those who believe they benefit from the current configuration is so stiff and the ranks of those who seek change so divided by approaches that are driven by narrow national interests, the enthusiasm for reform is giving way to a disquieting paralysis.

Yet, all the member states, peoples and political and social forces that thirst for peace, justice, equitable socio-economic development and the protection and enhancement of the environment cannot give up.

We need to persist in our efforts to rebuild and revitalize the United Nations.

We need to strengthen our solidarity and defend the time-tested principles of equal sovereignty of nations, respect for territorial integrity, peaceful coexistence, the right of nations to choose their social and economic path of development, respect for the dignity and rights of citizens and migrants and fidelity to the Charter of the United Nations and international law.

We need to strive and cooperate at the national, regional and global levels for sustainable and equitable development, a lofty goal that also underpins peace and social justice.

We need to fight to avert an environmental catastrophe that awaits human kind and threatens human civilization. This will require more than human ingenuity and advances in science and technology. We must realize that there can be no technological fix of the environmental challenge. It will require radical change away from economic and social systems based on greed, maximization of profits for the few, massive inequality, unsustainable and unhealthy patterns of consumption and gross wastage.

Eritrea is committed to striving for a fair, just, truly representative and effective United Nations because it was and is now a victim of the United Nations and the powers that have dominated the organization. Six decades ago we were denied of our inalienable right to self-determination and independence; for three decades, we were savagely bombed from the air and the ground, with the aim of crushing our liberation struggle; and today, we are subjected to unfair and illegitimate sanctions and baseless accusations. The United Nations and its Security Council continue to countenance the illegal occupation of our sovereign territory in violation of international law and several Security Council resolutions.

Despite this hostility and injustice, Eritrea achieved independence by dint of a heroic struggle against tremendous odds. Today, Eritrea is making remarkable progress in building a nation based on citizenship and an inclusive state and the respect of human dignity and rights. It is peaceful, stable, secure and harmonious. Achieving unity in diversity, with its people animated by a common struggle and committed to a common future, it has avoided the pitfalls of sectarianism, radicalization and terrorism that have infected the surrounding region and many other areas in the world.

On another front, Eritrea is building a solid basis for sustainable development with social justice by prioritizing education, health, agriculture, industrialization, infrastructure, science and technology, all within a framework of regional cooperation and integration, in the Horn of Africa and the Gulf region across the Red Sea. Eritrea welcomes the adoption of the Sustainable Development Goals of Agenda 2030 which accord with its development vision and priorities and is determined to achieve them ahead of the 2030 deadline.

Maintaining focus on development, Eritrea is fighting human trafficking, stabilizing illegal migration and giving youth and women adequate opportunities to pursue a high quality of life and build their nation. Eritrea is also making its contribution to regional peace, stability and security in the Red Sea and the Horn of Africa.

Eritrea sees its own efforts for peace, justice, development, environmental protection as part of the global struggle for a better and more fair and equitable world; for a strong, effective and truly representative United Nations.