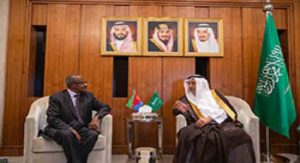 The discussion between the two sides was focused on concrete measures to strengthen and consolidate mutual development, trade and investment ties.

The two sides also discussed on the developments in the Horn of Africa as well as the security in the Red Sea region. During its stay in Saudi Arabia, the delegation will meet and hold talks with other Saudi officials, businessmen and the Eritrean