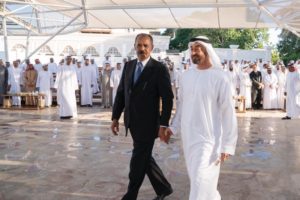 President Isaias Afwerki met on 23 December in Abu Dhabi with Crown Prince and Deputy Supreme Commander of UAE Armed Forces, Sheikh Mohamed bin Zayd Al Nahyan. The meeting was focused on the historic friendship and cooperation between Eritrea and the United Arab Emirates in various development projects especially in the sectors of agriculture, energy and investment.

The two sides also discussed in greater length on prospects of cooperation as well as regional and global developments of interest to the two countries.

The friendly relation between Eritrea and the United Arab Emirates is long standing that began during the armed Struggle for Eritrean independence.