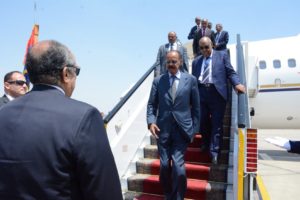 President Isaias Afwerki arrived in Cairo for a two-day visit to Egypt. President Isaias & his entourage are scheduled to meet President El- Sisi & other senior officials to discuss bilateral ties; latest developments on the African continent; &, other issues of mutual interest.

Upon arrival at the Al-Ittihadiya Palace in the afternoon hours, President Isaias was accorded warm welcome by President Abdel Fattah El-Sisi accompanied by guard of honor and national anthems of the two countries.

President Isaias Afwerki and President Abdel Fattah El-Sisi held broad discussions on bilateral relations and regional cooperation, focusing on Red Sea as well as the Horn of Africa.
The two leaders expressed concern about developments in Sudan and called on the Sudanese people and actors to address the demands of the transition period with responsibility and to resist undue external meddling.

During his stay in Egypt President Isaias will hold similar discussions with other senior Egyptian officials.