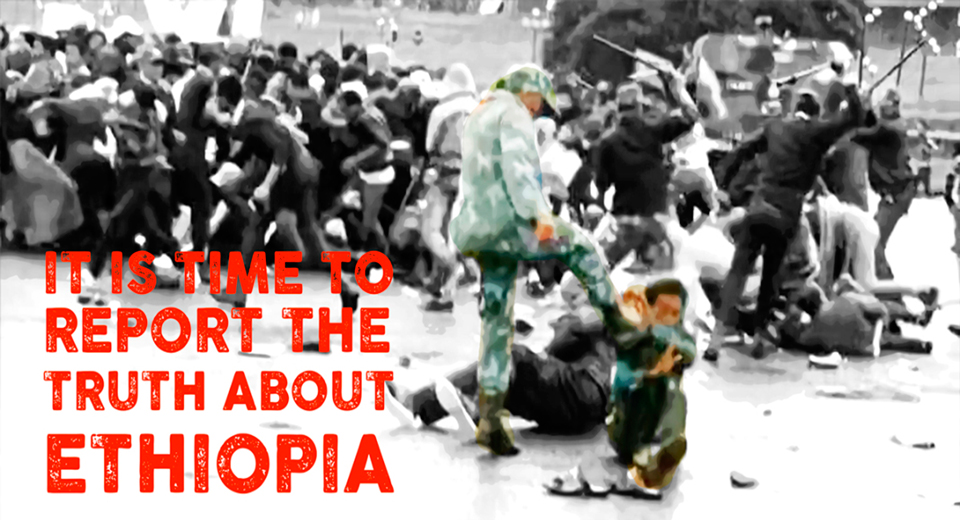 Source: It is time to report the truth about Ethiopia! |

Ever since the great Ethiopian Athlete Feyissa Lelisa crossed his hand in solidarity of Oromo Protests and highlighted his governments human rights violation of Oromos, Amharas and other ethnic groups. We read and saw a lot of commentaries and stories about his courageous act. Then we heard from Western media outlets how Ethiopian government spokesman Getachew Reda gave them his word that if Lelisa return, he will be treated as a hero. This might be seen as a positive and good move by the government of Ethiopia but only gullible journalists or intentional overlooks will believe this as even close to the truth.

Almost most of the people who lived in Ethiopia under the current government or was once lived and emigrated from the country know how this will play if he returns. If he return, yes the government will celebrate him in public, heck they might even put him in open truck and parade him in the city. Then he will be taken to the palace and meet the president and get a gift of some sort. Every one will be satisfied; the western embassies fax their respective countries and say all is well.

Then the abuse starts. How do I know that? Ask human rights activist and lecturer Bekele Gerba if you find him. Bekele Gerba was in Washington DC in July 2015 fresh off a five plus year prison term in which he was sent to jail for unfounded case. When he was here,  he was interviewed by NPR’s all things considered what he will face when he go back. In the interview he said, “Nobody is actually sure in Ethiopia what will happen to him anytime, Anytime, people can be arrested, harassed or killed or disappeared.” and then he went back. He was not arrested right away but about four months later, he was thrown to jail, tortured, humiliated and still languishing in Kilinto jail.

The skillful Ethiopian government cheated its way out of all the public scrutiny to the point where they asked food aid for 10 million starved people in the same day they declared 10 percent economic growth. The question simply is is the Western media gullible or they intentionally ignore the cry of Ethiopians?

We know and it is a public record that Ethiopian government kills its citizens for protesting against what they believe an illegal land grab by the government. We know it imprison journalist, crushes dissent, blocks social media and jam radio waves so news channels like Oromo Media Network (OMN) and ESAT will not reach people. We also know for the past 9 months the government killed hundreds of students, farmers, civil servants, children under the age of 18 and pregnant women (Shashitu Mekonnen) in Oromia region. It is also a public record that scores of people killed in Gonder and Bahir Dar due to the Amhara protests in relation to rightful and constitutional question related to Wolkaite area.

We know all of the above mentioned events unfolded in Ethiopia in the past nine months yet, the government managed to keep the sin hidden from the world until the brave athlete uncovered it. Instead of asking the government about the human rights abuse, once again, Western media is trying to tell as all is good in horn of Africa. Not so fast.

Ask your self. Here is a young athlete with illustrious records that competed in US, Europe, China and won multiple times. He lives in the capital city and have family and children to raise. As a famous young athlete he owns well earned wealth and a life he build for a himself. He represented his country and represents it well by winning a silver medal in the biggest sport stage in the world. Instead of going home to his happy family and country why do he decide to throw it all? How bad it has to be at home for him to decide not to see his kids and wife for uncertain future?

One can raise a reasonable question by asking these questions. Any reasonable journalist understands his fear of persecution watching him whisper and checking his back multiple time while talking to journalists as if the government come and yank him out of the interview.

I believe journalist have a responsibility to investigate and report the human rights violations in Ethiopia. It is time to question the politicians that emboldened undemocratic governments like the one in Ethiopia by giving them aid to kill and harass their own citizens without any accountability.

It is a time for journalist to do the heavy lifting in Ethiopia to save life. It is not only enough to show emotions while reporting kids being pulled out of bombed-out buildings, by uncovering the truth, journalist can help avoid the war that causes it.

Tags: Source: It is time to report the truth about Ethiopia! |