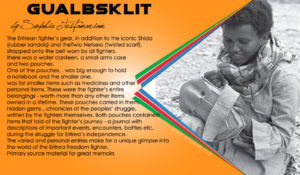 The Eritrean fighter’s gear, in addition to the iconic Shida (rubber sandals) and theTwio Netsela (twisted scarf), strapped onto the belt worn by all fighters, there was a water canteen, a small arms case and two pouches.

One of the pouches, , was big enough to hold a notebook and the smaller one, , was for smaller items such as medicines and other personal items. These were the fighter’s entire belongings – worth more than any other items owned in a lifetime. These pouches carried in them, hidden gems…chronicles of the peoples’ struggle, written by the fighters themselves. Both pouches contained items that told of the fighter’s journey – a journal with descriptions of important events, encounters, battles etc. during the struggle for Eritrea’s independence. The varied and personal entries make for a unique glimpse into the world of the Eritrea freedom fighter. Primary source material for great memoirs….

These chronicles attest to the scrupulous record keeping of the Eritrean Peoples’ Liberation Front (EPLF) and the yet to be told story of a peoples struggle for liberation. No need to fight with mingled memories and myths, it is all there in black and white…It’s all in there, each event, each mission, each fight…recorded for posterity with much humility, and never any exaggeration. These journals are the Tegadlay/Tegadalit’s subjective portrayal of events, record of life in the trenches, a rare and vivid insight into the liberation war and the fighter’s own observations and recollections. An exhaustive portrayal of the liberation struggle is still wanting…but the individual accounts can serve as a beginning – as triggers to nudge hidden memories. There will be a lot missing, as not all fighters were able to preserve their gears – some were removed by the enemy, some lost in the chaos and destruction of Africa’s longest war of liberation.

In order to appreciate the magnitude and cost of the Eritrean struggle, it is necessary to recall that in the beginning, the Eritrean People’s Liberation Front was made up entirely of young men and women who left their homes and villages, fleeing the enemy’s barbaric scorched earth policies. They had virtually no weapons, no international influence, no funding, and no experience in warfare. But they exhibited remarkable strength of will, courage, and amazing ingenuity. Armed with these qualities and little else, these gallant fighters vanquished the largest army in Africa, which was supported by the superpowers of the day. The struggle entailed grave dangers, and extraordinary sacrifice. Eritrea’s Martyrs left an indelible impression on their comrades, the Eritrean people, but most of all, on Eritrea’s history.

At home, I nagged my reluctant aunt who fought in the liberation war, into opening up her suitcase to pull out her gear belt and the Gual Bsklit, buried deep beneath. Why were these treasures kept hidden from sight? Why they were not displayed in the armoires in clear view of all? My aunt was very protective of these items and she told me that they did not belong with all the other worldly possessions in the home. She said they belonged to a life and time that was different in every way. Too precious to risk contamination, she preferred to preserve them in their own space… not to be disturbed…just like her memories of the past.

After much prodding, she allowed me to reveal the contents within. Opening each pouch, I laid out the items on the dining room table. It was as if I had opened a treasure chest. Each object brought memories of a time spent with her comrades and a life spent in the struggle, which she said, was the best she had ever known. The tears flowed uncontrollably. I too found myself shedding tears for her, and her comrades. With great reluctance and more aggressive prodding on my part –  including threats of not ever coming back again, I managed to pull painful memories hidden in her heart, and in these items.

I threw questions at her… to pry open an era that remains unscratched-to fill the lonely gaps of exile and separation –  and of the intense camaraderie forged in the trenches. How does one reveal the essence of a war fought with such great passion and sacrifice? The fighters lived in extraordinary times…they had the front row seats at the making of history and I realized how much there was to tell, how much I did not know – but also how much they preferred to keep sacred, lest they risk belittling its enormity through the use of mere words.

These journals contained entries of life lived in a battlefront, a life shared with comrades. If pieced together, if told in full, it would tell a story of unparalleled valor, of conquering death and fear, of love and loss, of learning and giving, of knowing with certainty that the struggle could survive your death, and that of many others-that victory was imminent. Yes, in that tiny pouch, lay memories of an era lived, only to be revived by the inquisitive. Eritrea’s fighters will not volunteer any information, steeped in a culture that frowns on self-indulgence, of speaking about oneself. Every Eritrean family has links to the struggle. The freedom fighters came from every ethnic and religious background, and all contributed to the success of the Front and each has his or her own vantage point and recollection…

Unfortunately, this culture of silence and preservation, has contributed to the distortion of Eritrea’s history and allowed for the unscrupulous attempts at rubbishing its record. Most of all, it has prevented it from being told in full…These journals are a gem and provide a glimpse into the lives of Eritrea’s freedom fighters – a treasure throve of information, to be preserved for posterity. I could only imagine the volumes that can be produced if all the stories were pieced together. But how? Who could present it without blemishes? Who could nudge the memories from the crevices of the minds and hearts of the fighters? Not willing to give up, I continued my search.

As I took the contents off the belt, I found other items in the pouches. There were pictures and letters sent to her, as well as other personal items, including medication. Each pill reminded her of incidents that required medical treatment…She was reluctant to share that too. And I also found something that I had never seen before. It looked like an origami envelop, some kind of letter fold. It was an announcement of the martyrdom of a comrade. It contained the name, date and place of martyrdom. Through these origami envelops, the fighters were notified of the martyrdom of a spouse. Where were you when you received the news? What did you do? Did you mourn? For how long? A million and one questions…but like everything else about the struggle, they presented as trivial questions…she chose to not answer.

28 years after independence and she was still hanging on to her memories . . . unable or reluctant to put them into words…not willing to disturb the unreachable chambers in her mind – where her memories seem to feel the safest. From the battalion leaders to the others in the rank in file, each keeping note of events in real time, and keeping account of their fellow comrades, especially the Martyred. One can only imagine the many stories that could have been told if only we could locate these pouches and the gems they held within.

At this year’s commemoration, the lyrics of the song by the famed Eritrean musician, Henok Teclay “Nago” asked poignant questions. Who could accurately depict the Eritrean Martyrs’ sacrifice? Could the painter’s brush bring to the canvas an accurate portrayal, could the hues and shades capture it accurately? Could a writer find the words to tell the story in full? Would a sculpture, even one made of gold and crowned with jewels adequately represent a life given or portray the enormity of the sacrifice? So would we ever be able to tell their story? Maybe not, but the Gual Biskilit’s hidden in each home may be the place to start….

Each fighter has a story to tell… sentiments of many moments to share…. but will they do it…can they do it…Do they want to? The best we can do is keep asking. I found one Gual Biskilit that provoked some telling…let us find more.