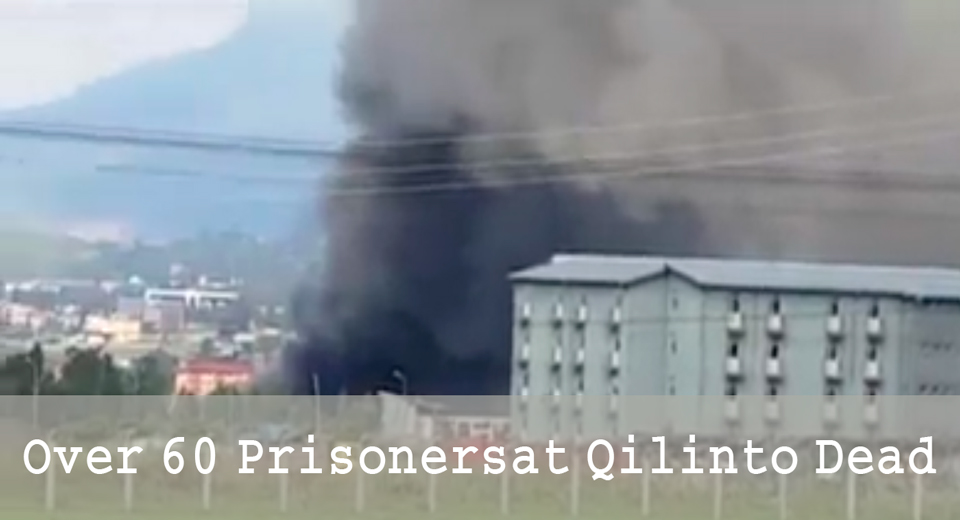 Hospital sources told ESAT that they have received 60 bodies from Qilinto prison on Saturday and Doctors confirmed that all of the victims died from gunshot wounds. Their bodies were riddled with bullets, according to the doctors.

Fire broke out at the Qilinto prison outside the capital Addis Ababa on Saturday sending a shockwave to the entire nation on the safety of several political prisoners held at the notorious dungeon. Prison sources said the fire was started as a cover up for the extrajudicial killings at the prison.

It has now been confirmed that the fire had actually deliberately started by the prison security after they shot and killed four prisoners. The majority were shot dead by snipers from the rooftop as they run away from the engulfing flames to save their lives. Some actually were shot and killed as they try to dowse the fire that broke out in one quarter of the maximum security prison.

Hospital sources also told ESAT that they were instructed to identify the bodies only in codes, not by the identities of the deceased. Agazi Special Forces and Federal police prevent families of the thousands of prisoners from visiting the hospitals to find if their loved ones were among the dead.

A visit by families of hundreds of prisoners at the various other prisons where the remaining prisoners were reportedly transferred were to no avail as security forces would not tell them if their loved ones were in those prisons.

Some families of prisoners who went to the Kality prison on Monday run into the guards who work at Qilinto and asked them if their loved ones were alive and transferred there. The guards told them to come back after five days.

An estimated 3000 prisoners of conscience, mostly Oromo opposition figures and Ethiopian Muslims who demanded political and religious freedoms were being held at the notorious dungeon when fire broke out on Saturday. Forty one representatives of the Muslim community, fifty youth from Amhara region detained in the recent protests and Airforce pilots thrown to jail for bogus charges of affiliation with an opposition political party were among the political prisoners at Qilinto.

This is the third time in a span of short period when a prison filled with political prisoners catches fire. A prison in Gondar and Debretabor caught fire as the brutal forces of the TPLF shot at inmates who were trying to run away from the fire.

Ethiopians doubt if those fires were accidental. The fires only happened in prisons where dissenters and democracy activists were held.

A fire that broke out at the Kality prison nine years ago killed at least 150 prisoners. Hundreds of political prisoners including the then leaders and members of the Coalition for Unity and Democracy, a.k.a Kinijit were jailed in Kality after they won the national election in a landslide. The regime rigged the election, security forces killed 198 demonstrators in Addis Ababa who demanded their votes be respected, and opposition political leaders were put behind bars following the election in 2005.