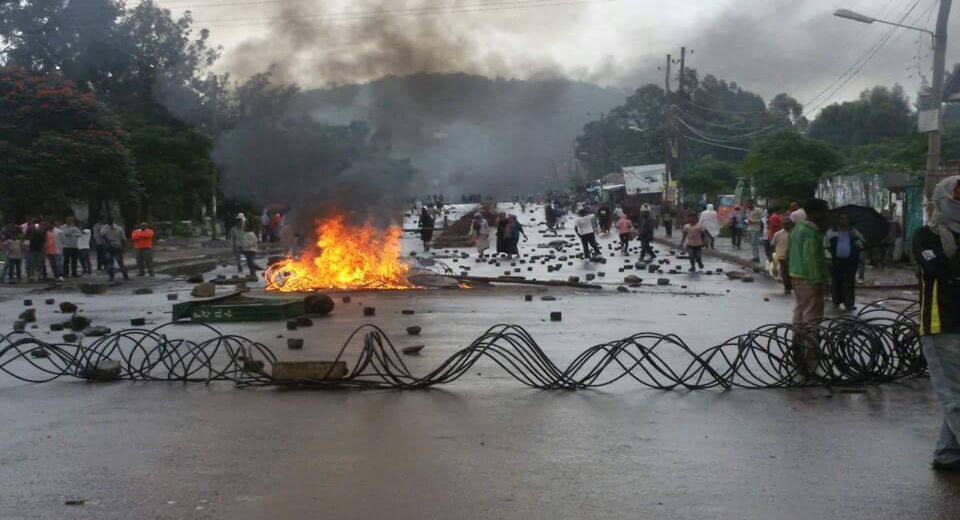 The blue skies over the city of Bahir Dar were covered in smokes on Monday, on this deadly day of protest against TPLF oligarchy, as people in the Amhara region of Gondar and Gojam intensified their defiance against the Tigrayan minority rule. Trails of smokes were rising all day into the skies of the city of Bahir Dar as protesters burnt tires on the streets and set ablaze businesses affiliated with the regime as well as houses of officials and spies of the regime.

Several towns and localities in the Amhara region were declared free of the control of the TPLF regime and the people in these areas have established their interim administration and security led by religious figures and elders.

In Gondar, between Hamusit and Wereta, on a bridge called Gumara, 7 members of the federal police and 4 farmers were killed in a gun battle on Monday. Four people were also reportedly killed by regime forces in Simada.

The stay-at-home protest in Bahir Dar turned into a street protest when regime forces attacked a group of vigilante youth who were raising funds and helping the poor in the city. The residents then took to the streets and burned tires and attacked businesses affiliated with the regime. At least four people were shot and killed by regime forces in Bahir Dar on Monday and several others were wounded.

Details are scanty but in Tis Abay, in a place called Genji, 30 kms from Bahir Dar, armed farmers have engaged regime forces in gun battle.

In Meshenti town, two horticultural farms were set on fire by protesters, turning the flower fields into ashes. One person is feared dead in Meshaenti in Monday’s protest. The town of Merawi declared itself free from the TPLF rule as local officials and police have left the town. Protesters burnt the houses of the officials and police as well as businesses affiliated with the TPLF.

Similarily, in Dangla, protesters burnt houses and businesses belonging to the local administrators and search by the protesters into the house of a notorious police known for his cruelty found that he has hidden 50 quintals of sugar, 50 containers of edible oil as well as 4 weapons. Residents set the officer’s house and vehicle on fire. Also burnt to the ground was a house belonging to a member of the TPLF who shot and injured several people.

In Gondar, Amba Giorgis, residents stopped a truck loaded with 500 cases of beer, dump the beer and used the plastic cases to block the highway. Two trucks carrying 32 cattle were also stopped at Amba Giorgis. The trucks were let go after the residents confiscated the cattle. The beer and cattle trucks were targeted by the protesters as the businesses belong to the regime business empire.

In Belesa, armed farmers in 11 buses were heading to Maksegnit to back up the residents of the town who were under attack by regime forces. A standoff ensued and continued for hours on Monday when regime forces stopped the buses.

North Gondar, South Gondar, West Gojam, Awi and East Gojam are areas in the Amhara region that were freed from TPLF control over the weekend. Protesters in theses towns and localities have replaced the regime flag with the Ethiopian flag.

The regime meanwhile sent over 2000 Agazi Special Forces to the Amhara region over the weekend to squash the ongoing protest. The people in the Amhara region were alerted on the coming of the forces and they have blocked main highways reaching several towns in the region.

What began few weeks ago as a protest against the forceful incorporation of the people of Wolkait, Tegede and Telemt, and their land into the Tigray region has now grown into a demand for the removal of the brutal regime in Addis Ababa, where Tigrayans control every aspect of the lives of the people. Protesters in Amhara and Oromo regions demand for the end of a complete domination of the country by one ethnic group that represents only 5% of the population.

At least 700 people in the Oromo region and 200 in the Amhara have been brutally murdered by TPLF forces.