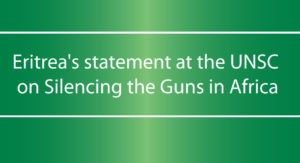 Statement delivered by Mr. Amanuel Giorgio, Charge d’affaires of the Permanent Mission of Eritrea to the UN, during the UN Security Council Open Debate on “Silencing the guns in Africa” under the agenda item “Cooperation between the United Nations and Regional and Sub-regional organizations”
New York, 27 February 2019

Let me take this opportunity to thank Equatorial Guinea for organizing this open debate themed “Silencing the guns in Africa”, an important  and timely topic  for our continent. My thanks also go to H.E. Simeon Oyono Esono Angiie, Minister of Foreign Affairs and International Cooperation of Equatorial Guinea, for presiding over this session of the Council.

Let me also seize this opportunity to express thanks to the  Under-Secretary­ General for Political Affairs, Ms. Rosemary DiCarlo, and the AU High Representative for silencing the guns in Africa, H.E. Mr. Ramtane Lamamra.

My delegation  associates itself with the statement made by the Permanent Representative of Benin, H.E. Ambassador Jean-Claude do Rego, on behalf of the African Group.

Africa is endowed with huge human and natural potential that can transform the lives of its citizens and the world at large.

The wave of decolonization in the 20’h Century brought hope for a collective work in the continent to ensure peace, justice and development, as well as safeguarding the independence and interest of African nations.

In Africa, from the East to the West and in the North, extremism, and terrorism are spreading, taking advantage of state fragility and insecurity. The result is a deteriorating condition for millions of Africans, intergenerational poverty and inequality, migration, environmental degradation and recurrent droughts.

Nothing is more descriptive of the continent’s situation than the fact that over 75% of the Security Council’s agenda is focused on Africa.

Without discounting the complex challenges for causes and  dynamics  of  inter­ states and intra-state of conflicts, Eritrea is a firm believer in Africa’s potential to silencing the guns and affording its citizens the life that they deserve. It requires political will to reclaim the priorities and the narration of the continent.

The need for the nations of the African Continent to have the political space in charting their own development and political paths is critical. What Africa needs is less external interventions and more partnerships. The region has to strengthen its own mechanisms for prevention, peaceful resolution of  conflicts  and  peace building in order to avoid violent conflicts and prevent post-conflict states from sliding back to conflicts.

The Horn of Afl-ica region is one example of a region which experienced decades of human suffering as a result of conflicts, with peace having been elusive for many of its citizens. Yet, in recent months the historic peace deal between Eritrea and Ethiopia has resulted in rapid positive changes marking the dawn of a bright era in peace, partnership and development for the entire region as well as creating oppmiunities for peace across the region.

The new found peace has so far, resulted in the opening of border, movement of the two peoples, uniting of families, resumption of trade, start of communication links, cultural exchanges and more. An important take away from the new developments in the Horn of Africa is the importance of leadership, political will and ownership of conflicting parties to resolve their conflict by themselves.

The recent peace has also opened doors for the consolidation of peace in the rest of the region. In the tripartite agreement signed between  Eritrea,  Ethiopia  and Somalia, the countries agreed to cooperate in advancing the goals of their people, promoting regional peace and  security, building close political, economic,  social, and cultural and security ties.  Moreover, during a separate meeting between the Presidents of Djibouti and Eritrea, they pledged to open a new chapter of cooperation in their relations. These developments are the result of a courageous choice made to close the era of conflict and zero sum game. The new peaceful dynamics in the Horn of Africa will be a huge boost to the ambitious objectives of silencing the Guns by 2020.

The citizens of the Horn of Africa have embarked on an arduous journey of transforming the region for present and future generations. Determined  to  get  it right this time around and make up for lost decades and missed opportunities for peace and economic progress, there is a sense of great responsibility to ensure what has been achieved so far is inclusive and sustainable.

In conclusion, while we hail the rapid progress in the past few months, we are mindful of the challenges ahead in the creation of durable peace  and also sustainable development in the region as envisioned in agenda 2063. We will be counting on your solidarity to sustain the peace while yearning the same for the rest of the African region.

Tags: Eritrea's statement at the UNSC on Silencing the Guns in Africa