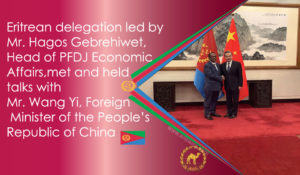 et, Head of PFDJ Economic Affairs, met and held talks with Mr. Wang Yi, Foreign Minister of the People’s Republic of China in the sideline of the meeting on the Implementation of the Follow-up Actions of the Beijing Summit of the Forum on China-Africa Cooperation (FOCAC).

The two officials discussed on bilateral ties of cooperation and regional and international issues of mutual interest.

Mr. Hagos underlined the long-standing ties between the two countries, Eritrea’s development matrix that is based on the promotion of trade and investment as well as China’s support in the past years which has been impacting in several sectors.

Foreign Minister Wang Yi on his part indicating the historic relations between Eritrea and China expressed his country’s readiness to work with Eritrea at regional and global forums.

Indicating on significance of Eritrea’s strategic location, Mr. Wang commended the active involvement of Eritrea in the Horn of Africa and expressed readiness to develop cooperation with Eritrea in the sectors of construction, health as well as oil exploration.

At the meeting the two sides identified areas of cooperation and discussed on their implementation.