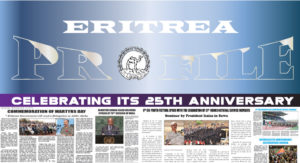 Profile, the English language newspaper in Eritrea, is celebrating its 25th Anniversary. Since its inception, it has been embroiled in the most tumultuous time in Eritrea’s post-independence history.

Profile kept the population abreast of developments on the war front, in the various nation building endeavors, and also news about the Diaspora. Today, Eritrea and Ethiopia are at peace after a difficult 20 year conflict and the UN Security Council has also finally decided to lift the illegal, unfair and unjust 9-year long sanctions, paving the way for greater engagement with the international community, which had isolated itself from Eritrea and its people.

I have been one of the lucky contributors from the Diaspora that has had the opportunity to share my thoughts on a variety of topics and issues and develop a column readership at Profile. Writing about the many places I visited in Eritrea, the development projects and the many hundreds of people I have met over the years, and the expansive Diaspora population that has greatly enriched my life, can make for more than just a column or two. The complex issues relating to the delimitation and demarcation of the Eritrea Ethiopia border, the illegal and unjust UN sanctions and the assault on Eritrea’s cultures and traditions at the UN Human Rights Council, the proliferation of NGOs in cyberspace etc. etc. provided an opportunity to research and learn about the international system and its fault lines. Providing balanced reports on important issues of the day and insightful analysis, Profile readers can find content from a diverse array of voices, with varying expertise and knowledge.

I am still learning the rules and what it takes to be a good columnist. It is important that he /she should be able to deliver materials on time, have interesting stories to tell, and keep to the allotted space (word count). Alas, I have not been able to do any of that and yet, I persist, because that is what Eritreans do. My pieces tend to be longwinded, with good reason. I insist on providing adequate background and references, and by the time I get around to adding my two cents worth, half my allotted space is gone. I get it that long winded articles are hard on the readers. While those reading articles in print tend to more leisurely peruse content, and don’t mind the long pieces, keeping the balance has been tough with the digital skimmers. And when I began writing, it was to vent, to exhale….so my tone was expressly e m o t i o n a l . Profile would not be the place to do it , as the standards are much higher than in my other blogs. Today, I can honestly say that it has had a profound impact on me as a writer, as I have learned to say more with less , not engage in polemics, and to write passionately, not emotionally.

Often asked about where I get my ideas from. My topics are usually sparked by some obscene commentary on Eritrea n the mainstream media or academic journals, off the cuff discussions with friends and colleagues etc. I have been lucky in that there are very few times that I have struggled to come up with a topic to write about. Eritrea has been prominently placed in the mainstream media for the last two decades and responding to the distorted narratives, mis-information and mal-information has been the bulk of my contribution. For Profile, beyond providing information about Eritrea its people, is also sought to “counter the widely spread unjust narratives about Eritrea and its people”, and so I found my niche. Profile’s readers vary; some prefer the interactivity of the web, others the portability and permanence of print. Its readership is growing both in print, and on the internet, and me with it.

This is the era of digital media and over the years, we have seen the proliferation of information producers- citizen journalists. Profile has contributed to the rise of citizen journalists who have graced its pages with news, insights and opinions. Eritrea’s development strategy centers on the full participation of the people in the development of the country and at Profile and in all areas of information at the Ministry of Information, Eritreans from all walks of life are participating in the process of collecting, reporting, analyzing and disseminating news and information. Eritrea’s history is replete with stories of such participation by ordinary citizens, in real time. With a Diaspora population in just about every continent, Eritrean Profile has wide coverage and reach.

With advanced technology, this rich culture of expression and exchange enriches Profile’s content as the writers come from a variety of vantage points, to offer wide ranging perspectives to audiences, who are just as varied. Each learning from the other. With the advent of the internet, there has been an avalanche of information available, and with it, the public is asking for greater commitment to the fidelity of information, hence Profile’s strict code of ethics for all its contributors- to seek the truth. Contributors to Profile have come to appreciate the commitment to high standards. Deadline or not, nothing is done for expediency, and week after week, writers are encouraged to produce content that is both educational and interesting …and make it worth the reader’s time.

In 25 years, Profile has borne witness to much of Eritrea’s post-independence development, as well as its challenges. In the pages of Profile, one will find in the many writings, the sheer will and determination of Eritreans amidst international isolation and hostility. Eritrea’s core quality and success, much like the Profile, is its resilience in a very tough and hostile media environment. It is very difficult to respond to every single article or report that distorts the reality in Eritrea, but every effort should be made to do so. I am of the belief that silence means consent and no disparaging report on Eritrea should go unanswered.

Eritrea was forced to defend itself in the 1998-2000 bloody 2-year war of aggression and invasion with Ethiopia. It also faced an intense psychological warfare amidst illegal, unjust and unfair US engineered sanctions. Eritrea experienced an unprecedented, coordinated assault on the young nation, its people and government and the media played a huge role in the dissemination of erroneous narratives. It seems all instruments of power were used by the international community, to isolate and undermine Eritrea’s economic and political development. The 20 year long onslaught was another “war without missiles”. The people of Eritrea and Ethiopia in particular, and the people of the Horn region by extension, were denied the one thing they yearned for the most…peace. Profile and its many contributors were there to record the injustices.

Profile was there to record the nation’s post-independence challenges as well as its successes. There has been much done in Eritrea that should have made for headline news, but the hostile environment buried the truth. For instance, the great strides Eritrea has made in education and health care and the home grown programs that enabled it to be one of the few countries in sub-Saharan Africa to achieve most of the the UN Millennium Development Goals is something that others could have emulated. Eritrea’s carefully crafted strategy for meeting the nation’s food and water security needs is one that has yet to be told in full.

Profile is recording rare archeological finds that tell Eritrea’s ancient story and debunking long held myths about the region and its inhabitants. Profile is not just recording Eritrea’s socio economic and political development and nation building, it is also recording Eritrea’s history, and all contributors, bear responsibility for its accuracy.
French sociologist Gabriel Tarde wrote in 1898 that newspapers:

“…both enriched and leveled … the conversations of individuals, even those who do not read papers but who, talking to those who do, are forced to follow the groove of their borrowed thoughts. One pen suffices to set off a thousand tongues…”

The Eritrean conversation is ongoing…and Profile strives to bring the voices of many.

Allow me to take this opportunity to congratulate the staff at Profile for this momentous milestone. I am not just a contributor for Profile, but also one of its avid readers. I am not much into making resolutions or making promises I can’t keep, but I know one thing for sure, I will always have something to say. I just have to figure out the best way to do it. I hope to continue to produce content fit for Profile, as often as possible. The competition is getting stiffer and some great writers have come on board. I could write another page or so about the about the many prolific writers that have graced the pages of Profile in the last 25 years. I could also write about my most favorite stories, and the most pleasant encounters and interviews…But I better stop right here…I have to stick to my allotted space.