Eritrea : a Family Nation that Persevered 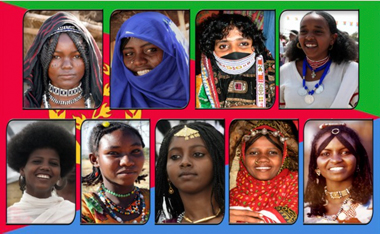 At times, it is hard to describe the essence of the nation and people of Eritrea to the outside world. That is in large due to the fact that Eritrea is unique nation with unique people that have defied insurmountable odds time and again to emerge victories.

Eritrea’s challenges are almost always existential and the people, innately understanding this reality, have established impenetrable mindset to overcome ever-mounting challenges and manage to sail above it as if telling the world bring- it-on. For, nothing that the enemies throw to divert or stop Eritrea from the march to success that the people have embarked-on earnestly can alter the trajectory.

Eritrea has long found ways to describe this march-forward with unique language that emanated from the days of the armed struggle for the liberation. It goes, “The Camel will march ahead as the DOGS bark.” That means there is not enough noise in the world that can change the ways of Eritrea.

Hence, and in light of the fact Eritrea is celebrating 25 years of independence during this month of May, it is high time to visit the essence, the core, to remind-how we got here. To remember the cost paid and to rewind experiences that molded Eritrea and shaped her collective identity.

To simplify and understand this point clearly all one needs is to examine Eritrea pre independence when Eritreans where fearful for their lives-livelihood and their future and, when they were forced away from their homes under duress. When Eritreans where getting killed, imprisoned and tortured by Emperor Haile Sellasie and Mengistu Hailemariam of the Derg. When the super powers first the US and later the Soviet Union assisted Ethiopian regimes to annihilate Eritrea and systematically empty Eritrea.

This was a premeditated approach designed and executed to annihilate Eritrea from existence, to weaken nationalism, to intimidate, harass and quell uprising. This was deliberate strategy that aimed to disburse the youth that they saw as threat. This was done to deny Eritrea the fighting force that is the youth then as in now systematically. Then as in now the carte-blanch-asylum to Eritreans was common practice though not as pronounced as blatant it is today.

However, what they failed to add into their calculation is the spirit and will-power of the people. They failed to examine the spirit, will, determination, courage, bravery and the willingness to sacrifice whatever it took to gain independence by defeating the enemies that imposed its will on the people illegally and brutally.

What is the secret?

The secret has always rested on the people. Eritreans dream, eat, breath and drink Eritrea. The resilience and can do victorious spirit of the people Eritrea can be described as one indestructible ship in the middle of a turbulent ocean with insurmountable waves. Yet, even while in the turbulent waters, Eritreans go about their business unfazed and steadily knowing fully what is ahead, victory.

That is the hallmark that expresses and sustains Eritrea.

It is the most appropriate expression that Eritrea chose to start the torch of 25 Years Independence Celebrations to start from Nakfa because Eritrea is the torch that burns in the heart of all Eritreans no matter where they reside and irrespective of the circumstances they live. Eritrea endures no matter what. Only, and only because Eritreans all over the world carried and carrying the torch for freedom and independence. Nakfa is the belly.

The story is, Eritreans, unbound by religious beliefs, unfazed by the challenges of the world, understanding that ethnicity and regional diversities are the blessings that work as the web network that bonds us all. Understanding that the nine ethic groups are the most beautiful and colorful expression of their identity; Eritreans have, for over 50 years championed each other en-route to the most important struggle to freedom as one and succeeded.

The independence of Eritrea is therefore the expression and direct outcome of the united struggle.

The struggle for independence of Eritrea was waged in the belly of the beast in Asmara, in the suburbs, main cities, villages and remote Areas within Eritrea. It was fought in the Middle East, Africa, inside Ethiopia, Sudan, in Europe and North America diplomatically, raising awareness while raising funds, providing moral boost to those in the field and by providing expertise.

The people of Eritrea fought as one; truly fought as one family because the blood spilled to gain this precious gift of independence and in defense of the nation was gift of blood that every Eritrean family paid dearly. Hence, the family bond that exists in Eritrea is etched in blood. That is what makes Eritrea a family nation, a nation born out of the shared family blood.

This is a bond that will endure, a bond that serves as inspiration, as anchor and manages to shield Eritrea from divisiveness that the enemies work day and night to impose. It shields Eritrea from mental slavery. For that is what the visionary front preached and fought against. They preached and fought to attain Self Reliance, a motto and a way of life. They exemplified a can do attitude, a drive that drove the revolutionary front and ultimately the nation to success.

Eritrea became free and attained independence because the people of Eritrea believed that Eritrea is a free nation independent from the rules western powers imposed on her. Eritrea was independent and free nation in the hearts and minds of every Eritrean before formal independence was attained. There existed no doubt that Eritrea will become free in the hearts of every Eritrean. That is the torch that burred in the hearts of all Eritreans everywhere and led them to work with each other and managed to collaborate silently in quest for freedom. Hence, the heroic participation of all Eritreans in the struggle was by far the greatest achievement of the Eritrean Family. Testament to victory for the masses by the