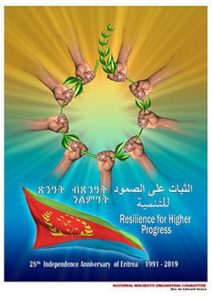 The official 28th Eritrean  Independence Day anniversary celebration will start nationwide from 15 to 24 May under the theme “Resilience for Higher Progress”.

Indicating that sports activities and schools independence week have been underway beginning from 4 May, Ambassador Zemede Tekle, Commissioner of Culture and Sports pointed out that the Independence Day celebrations will incorporate  musical and artistic performances by Eritrean and Foreign artists, handicrafts and innovation exhibitions, carnival, community gatherings as well as cultural and community programs.

Ambassador Zemede also said that cultural troupes for Japan, China and Egypt will stage programs and that will add color to the celebrations.

Pointing out that this year’s Independence Day theme is “Resilience for Higher Progress”, Ambassador Zemede said that that reflects the noble culture and values of perseverance and commitment of the Eritrean people that enable it to reach to this period of peaceful prospect and cooperation.

Ambassador Zemede went on to say that Independence Day anniversary celebrations is highlighted by the strong participation and ownership of the public and called for active participation.