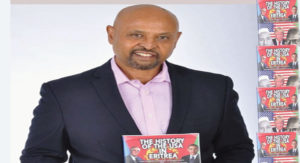 Recently I read the book, The History of the USA in Eritrea: From Franklin D. Roosevelt To Barack Obama and How Donald Trump Changed The Course Of History, written by Amanuel Biedemariam, an Eritrean-American author. Published in August 2020, the book provides a broad overview of the US’ relationship with Eritrea over the decades. Here, I offer a brief review of the book and then a short summary of my recent conversation with the author.

The Greater Horn of Africa comprises Djibouti, Eritrea, Ethiopia, Kenya, Somalia, South Sudan, Sudan, and Uganda. Home to hundreds of millions, boasting abundant natural resources, and blessed with great diversity and vast potential, the region has had a complex, often tragic, history, marked by recurrent famines, seemingly intractable wars and mutual destabilization, revolutions, coups d’etat, territorial disputes, and terrorism. Over the years, the Horn has attracted the attention of foreign actors and been the site of great power competition. Mainly, external players have been drawn to the region by its geostrategic importance; the Horn is the source of the longest river in the world, the Nile, which connects Africa with markets in Europe and beyond, while the Red Sea, Bab el Mandeb Strait, Indian Ocean, and Gulf of Aden represent major global trade sea lanes and key security points. The region’s close proximity to the oil-rich Arabian Peninsula, its role as gateway to the continent, and global concerns about radicalization and terrorism, have also contributed to the Horn’s significance.

Amanuel Biedemariam’s, The History of the USA in Eritrea: From Franklin D. Roosevelt To Barack Obama and How Donald Trump Changed The Course Of History (Lulu Press, Inc., 2020), seeks to explore the history of involvement by one global power, the United States of America (US), in one of the youngest country’s within the Horn of Africa (and the world), Eritrea. Consisting of 199 pages that comprise eight chapters, as well as a general introductory section, Amanuel’s concise book examines how and why the US became interested in Eritrea following World War II, traces the contours of US involvement in the country during the Cold War and the subsequent period during Eritrea’s independence, and unpacks factors that have driven American policy toward the country over the decades.

The book opens with a quick review of Eritrea’s pre-colonial and colonial history, before discussing how Eritrea, formerly an Italian colony and then under British administration, came to be federated with Ethiopia, which was ruled by Emperor Haile Selassie. After a lengthy international process seeking to develop an appropriate solution to the Eritrea question, on 2 December 1950, United Nations (UN) Resolution 390(V), passed by the General Assembly, extinguished Eritreans’ hopes and aspirations for independence, federating Eritrea with Ethiopia. The resolution was backed and sponsored by the US which, within the context of the emerging Cold War, determined that its geostrategic military interests and foreign policy aims could be better protected and served by federating Eritrea with Ethiopia, its close ally and key partner in the fight against the Soviet-led spread of Communism in Africa. A decade later, Ethiopian Emperor Haile Selassie dissolved the federation and annexed Eritrea, triggering a thirty year armed struggle in Eritrea.

The US provided Haile Selassie’s imperial regime with considerable economic, diplomatic, and military support – unmatched in all of Sub-Saharan Africa. In return for helping ensure Ethiopia’s access to the sea, the US was able to secure access to important military facilities and installations in Eritrea, including a communications facility at Kagnew station in Asmara (Eritrea’s capital), which was a vital US intelligence link. At the time, Kagnew was the largest overseas spy facility in the world, with approximately 6,500- 7,000 Americans stationed at the facility.

However, although extensive American support helped Ethiopia establish a large, modern army, regarded as the strongest in “Black Africa”, the imperial regime was unable to contain the Eritrean liberation movement, which quickly grew from a small group of “bandits” into a disciplined, formidable, and highly effective military force. Eventually, the US would be unceremoniously forced out of Eritrea in the late 1970s. In 1974, a committee of military officers, called the Derg, overthrew the 82-year-old Emperor. Soon after, the Marxist- Leninist Derg regime, led by Lt. Colonel Mengistu Haile Mariam, ousted the US from the country and realigned Ethiopia with the Soviet Union.

Although the US had long remained firmly opposed to Eritrean self-determination, US-Eritrea relations were reset after Eritrea became independent in 1993. Following the 1993 referendum, the US immediately recognized Eritrea and bilateral ties between the two countries were positive and cordial, even if there were points of disagreement and sensitive issues. However, relations quickly soured and then would considerably deteriorate under a series of different US administrations (Clinton, Bush, and Obama). The US, singularly driven by a counterterrorism framework, regarded Ethiopia as a strategic regional ally. As a result, Washington supported Ethiopia’s refusal to implement a binding UN peace deal which ended the 1998- 2000 war with Eritrea, and also worked closely with Addis Ababa to isolate Asmara (even helping engineer a set of international sanctions). However, during the Trump administration, Ethiopia and Eritrea finally made peace.

The book finishes by comparing similarities and differences between American leaders and policymakers from different eras (such as John Foster Dulles and Susan Rice), identifying several “silver linings” to be grasped from the US’ involvement in the country, presenting personal reflections, and noting points for optimism moving forward.

For the most part, US involvement in and policies toward Eritrea are demonstrated to have been counterproductive, failing to promote stability in the region and creating various risks for the US. For instance, US policy toward Eritrea led the latter to pivot away from the West and deepen its relationship with China and the Gulf, at the same time that Washington’s strategic interest in engaging constructively with Asmara had actually been growing (due to instability in Ethiopia and Sudan, as well state failure in South Sudan and Somalia).

Amanuel’s work is useful and admirable. By incorporating historical documents and other important materials (e.g., letters, cables, etc.), as well as the views of insiders (e.g., community activists, ambassadors, etc.), he strengthens his arguments and solidifies the overall work. Additionally, the book integrates the experiences and perspectives of Americans who were stationed in Eritrea prior to the Derg expelling the US from the country. The first-hand experience of these individuals and their proximity to the events and topics covered in the book provide useful and deep insights.

As in many developing countries, knowledge and scholarship generated on Eritrea has largely been dominated and driven by non-Eritreans. Eritrean writers and researchers tend to be underrepresented and marginalized in scholarship about the country and its history, with Eritrean works given relatively scant attention. Within this context, Amanuel’s book is worthwhile and significant. It offers a different, unique perspective and an indigenous voice, potentially broadening understanding and deepening the canon of referenced literature.

Overall, the book is thought-provoking and interesting, and it makes an important contribution to the existing body of work on Eritrea and US foreign policy in the region. Well-written, replete with detail, while also straightforward and concise, the book will be of great interest and a valuable resource for students, historians, and researchers, as well as those generally interested in Eritrea, Africa, and regional US foreign policy.

Conversation with the author, Amanuel Biedemariam

Thanks. Eritrean history has mainly been told by others. Our voices and perspectives have been missing. The history of Eritrea has often been based on limited information or largely anecdotal. So, I wanted to expand the discussion and present the Eritrean version of the story. I also wanted to give Eritreans, especially the young and future generations,
another perspective.

The entire process was challenging, except for the writing! I love the search and discovery aspect, as well as putting the pieces of the puzzle together. Everything else was a challenge: copy editing, line editing, formatting, proofreading, designing the book cover, and marketing. Also, since writing is not a habit for many in our community and because there are few established places to turn to for support, things were occasionally difficult. Our community could better encourage and support writing. However, I am very grateful to my friends who looked over early drafts and offered a lot of useful feedback.

The Eritrean story is largely untold. The struggle for independence and role Eritreans played is unique. Until now, writing was difficult. Eritreans struggled against foreign, especially Western, intervention, meddling, and intrigue. I wanted to capture the role of Eritreans abroad and share their special story.
Also, through research over the years I understand how elaborate and extensive the external designs have been. Of course, it is not unique to Eritrea. We’ve seen it in other places: the Congo, South Sudan, Sudan, Rwanda, and many other places. However, the history of the US in Eritrea helps us understand how a lot of this unfolds. It exposes the motivations behind and impact of these external forces.
Finally, the book reaches out to foreign audiences, such as the American people. It can hopefully influence foreign policies in our region, broaden the discussion, and help correct the prevailing false narratives about Eritrea.

Eritreans have not been writing as we should for many reasons. To preserve our history and pass it on to future generations, we have to document it. While writing countless articles about our nation, I also chronicled part of the history of Eritrean communities abroad. I was a part of the journey, and that helped me develop a connection with the stories. I feel that I have captured those well and I would like Eritreans to build upon it. It can also be useful for education, research or in the decision- and policy-making process. I hope my book can support people to people interactions here in the USA, which is also why I created the website USEritrea.com.

Finally, Eritreans should continue to support writing endeavors, which are large undertakings. We all should do what we can to support those who write.