He safely crossed the finishing line with his Sky team-mates on the Champs-Elysees in Paris at the end of the 21st and final stage which was largely a processional ride.

Froome crossed the finish line with his Sky team-mates

During the three-week race, he crashed twice, including one incident where his bike was broken in a collision with a motorcycle.It meant he found himself memorably running to the finish line.

Froome won the Tour ahead of Frenchman Romain Bardet in second and Nairo Quintana of Colombia who was third in the event seen by many as the world’s toughest bike race. 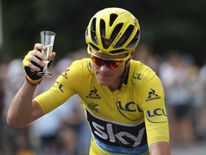 Kenyan-born rider Froome, 31, now adds to his Tour victories in 2013 and last year.