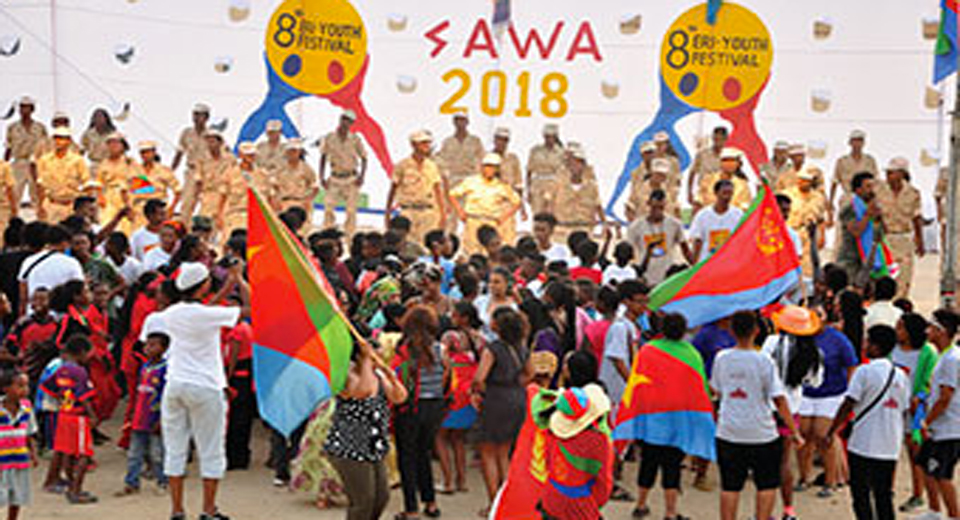 The 2018 National youth festival which began on 13 July, attended by more than 20 thousand participants ended on Sunday 15, July. It was a grand blend of events such as cultural shows, sport, educational competitions, seminars, exhibitions, youth theatres and other activities. The festival, held biennially at Sawa, is organized by the NUEYs, Sawa National Service Training Center (SNSTC) and other partners.

In the last couple of months Sawa has been preparing all the necessary facilities to welcome and accommodate its guests and help the smooth functioning of events. This year’s festival was celebrated along with the graduation of the 31st round and the 9th commencement of Sawa Vocational Training Center (VTC).

To attend the graduation ceremony on July 13, people started to take their seats from as early as 5:00 in the morning. Soon every nook and cranny of the place was filled with attendants. After a minute of silence to pay tribute to our martyrs, blocks of military trainees marched and gave military salute in honor of President Isaias Afwerki. In his address President Isaias told the gathering about his trip to Addis Ababa the next day. He said he was going to deliver the goodwill message of the Eritrean people in order to solidify the peace negotiations reached so far with the Ethiopian government. His address received huge round of applause from the participants.

President Isaias handed Sawa awards to Eritrean youth from the diaspora who demonstrated academic excellence. Award winners expressed their delight for receiving awards from the president and said that this will encourage them to do better for themselves and the nation. The organizing committee said that awardees are selected through national and community-based screening processes and a more enhanced mechanism will be adopted in the forthcoming festival.

Col. Debessay Ghide, commander of the SNSTC, officially opened the day by congratulating the graduates and their families, different institutions who contributed to the success of the event and all the participants. Col. Debessay said that the government is spending a large amount of money to build awareness among the youth, make the trainees physically strong and equip them with knowledge and technological know-hows so that they can be active actors in the nation building process and in safeguarding the national security. He noted that this year’s round of national service participants are graduating, following eight months of academic studies and four months of military and political education. The number of female participants has been increasing, making up 50.8% of this year’s national service graduates.

Mr. Tesfay Tewelde, director of VTC, on his part forwarded his congratulatory message to this year’s VTC graduates and their families. He said that to complete the two-year training program, a significant amount of capital, time and labor has been invested. Mr. Tesfay advised the graduates that their graduation is the end of one chapter in the world of education and the beginning of a new chapter that they should use to upgrade their profession in the practical world of work. VTC has graduated 1127 trainees, 49% of are females are females, in eleven fields. He added that the training center has introduced new fields including electronics, computer maintenance and networking, machine shop, auto-mechanics, refrigeration and air conditioning and is planning to start a program in foundry for the next round of trainees.

Mr. Tesfay noted that this year’s teaching-learning process was successful because of the huge investment the government has made to equip the center with the necessary facilities. The graduates vowed to pay back in kind for the investment made on them. Trainees who demonstrated excellence in the military training and from the VTC received awards from government officials and army commanders.

Enthusiasm of every participant and the national service graduates in particular was visible at the festival. Their excitement and passion could be seen when they were dancing to the tunes of every trumpet beats at the festival.

The eighth Eri-youth festival was lively with cultural celebrations and activities which enriched the understanding of our cultural values and norms. The Eritrean nationals from the diaspora in particular were enlightened with knowledge about the Eritrean ethnic groups and their traditions. Seminars were also held on different topics.

The three-day extravaganza was concluded with prize giving ceremony on Sunday evening. Speaking at the concluding ceremony, Mr. Robel Tewelde, head of the festival organizing committee, said that this year’s organization of the event was effective thanks to the experiences gained from previous festivals.