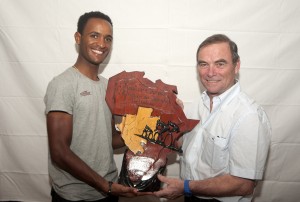 The 8th edition of the Tropical Amissa Bongo that Natnael Berhane received at the hands of Bernard Hinault the award for Best African cyclist of the year 2012. The five-time winner of the Tour de France chaired the jury of specialists who elected African cycling the Eritrean runner last December. This award initiated by the organizers of the Tropical Amissa Bongo was born in 2012 and has already had international repercussions which proves the interest in African cycling worldwide. Tens of thousands daily page views on the website of the event also demonstrate the diversity of nationalities users interested in the Tropical Amissa Bongo, Europe to America to Asia and Africa of course.
Natnael Berhane was able to account for the admiration it arouses Sunday evening during the official ceremony at the Beach Club of Libreville, applauded and congratulated by the entire caravan and runners platoon who had held in Tropical be present. To Bernard Hinault, Natnael Berhane said: “This award is an honor for me and for my country. I hope it will help me launch my career. I thank the organizers for this initiative Tropical but also members of the jury who nominated me. ‘ 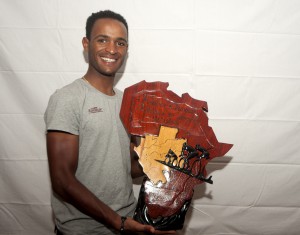 Tags: Natnael Berhane received at the hands of Bernard Hinault the award for Best African cyclist of the year 2012.