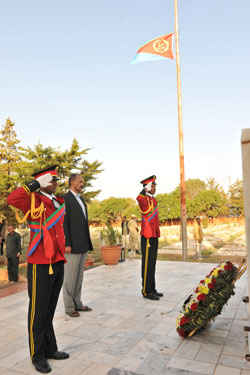 During the official ceremony in Asmara at national level, President Isaias Afwerki, Ministers, Army Commanders, Senior PFDJ Officials, religious leaders and thousands of participants conducted foot trek from Shida Square to the Martyrs Cemetery at 6 AM accompanied by the Marching Band.

Speaking on the occasion, President Isaias expressed appreciation for the people and the national media outlets for demonstrating the prevailing honor of the martyrs through staging different activities. He further pointed out that the nation could implement effective development programs over the past years of nation-building overcoming the challenges faced on the basis of demonstrating the highest commitment to the noble national goal and keeping intact the noble sprit of fallen heroes.

Different artistic performances highlighting the perseverance and heroic feats of the Eritrean people added fervor to the observance.

In conclusion of the ceremony, Mr. Joseph Karemera, Member of the Executive Committee of the Rwandan Patriotic Front and Chairman of the country’s Assembly, laid flower coronet at the Martyrs Cemetery.

Tags: Nationals in the Homeland and abroad commemorate Martyrs Day with patriotic zeal