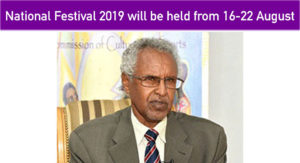 Eritrean Festival 2019 will be held from 16 to 22 August at the Expo Grounds in Asmara under the theme “Resilience for Higher Progress”.

Mr. Zemede Tekle, Commissioner of Culture and Sports stated that all regions have finalized their preparation to participate in the national festival by displaying their resources and cultural diversity.

Indicating that the national festival is expected to reflect the unity and diversity of the Eritrean people, Ambassador Zemede said that the festival will feature traditional villages depicting the cultures and traditions of the various ethnic groups in the country, cultural and music performance and competition, innovation and talent show, photo, paintings and sculptures exhibition, folklores, display of products by various institutions, children’s educational and entertaining programs, books display among others.

Ambassador Zemede went on to say that necessary mechanism will be put in place so that the social service provision institutions provide visitors of the festival service with fair price.